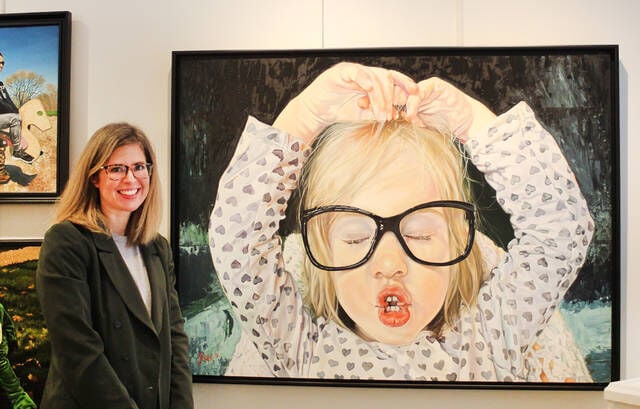 Shiawassee Arts Center Exhibits Director Jennifer Ross stands next to a painting of her daughter Monday. 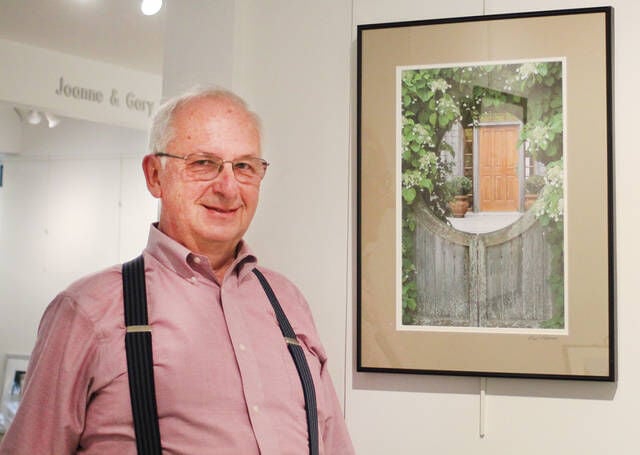 Karl Racenis, of Owosso, stands next to a photograph of the Mackinac Island library Monday.

Shiawassee Arts Center Exhibits Director Jennifer Ross stands next to a painting of her daughter Monday.

Karl Racenis, of Owosso, stands next to a photograph of the Mackinac Island library Monday.

OWOSSO — The Shiawassee Arts Center is featuring collections of paintings and photographs in its new exhibit, now open, by a number of local artists.

The public can view the works and meet the artists Sunday at the SAC. The exhibit runs through June 20.

Ross said is inspired by family, friends and emotions. She is showing a painting of her then-2-year-old daughter, wearing glasses. The painting took three or four months to complete.

Another piece depicts a toddler in a dinosaur suit with a somewhat confused look on his face.

“I take a ton of photos,” Ross said, describing her method. “Then I’ll go through those photos, and the ones that really speak to me or grab my attention, I’ll start with that.”

Ross said she starts her paintings with medium tones, and progresses from there in light and dark directions. She pointed out a portrait of her dog that she completed in two days.

“Like most artists, you don’t focus on one piece,” Ross said, and called the painting of her daughter a “heart and soul” piece. “This was all that emotion, all that process… I’m really excited. I want everyone to come and see this show.”

The DeVoes are displaying several items.

David DeVoe said he realized while in the Navy that he would be going to places he might never be able to visit again, so he purchased a camera and began chronicling his travels.

Kimberly DeVoe works mainly with pastels and colored pencils. Her work is currently featured in three local galleries, and has been published in art and instructional booklets. She does portraits of pets commissioned by their owners, or if they “speak to her in some way.”

Racenis is a photographer who “strives to see the light even on gray days,” and has been featured on the covers of several publications. Most of his photography is done in northern Michigan.

Racenis participated in a “Pure Michigan” workshop and has been practicing photography since high school.

“That workshop inspired me to essentially, really be inspired by, how beautiful a lot of the scenery, and the landscape is,” Racenis said.

He described a barn located on private property inside Sleeping Bear Dunes National Park. Racenis was able to find an alternate route to get the perfect shot of a spiderweb covered in dew with the barn in the background.

Murphy also travels throughout Michigan looking for opportunities. One set of her photographs was taken in a scrap yard and feature cars from the 1950s. Murphy said conditions were perfect before she took the photos, with rain having recently fallen, before the skies cleared and she got the perfect shots.

“There were hundreds of (cars),” Murphy said. “They’re all crushed now… There’s beauty everywhere. Just the beauty of Michigan. Different seasons, different everything.”

Murphy is self-taught and tries to capture things that “most people never notice.” She mostly photographs landscapes, nature and old buildings, such as barns.

Murphy is displaying about 30 photographs at the exhibit, including pieces of Pictured Rocks, Charlevoix, Sutttons Bay and Leelenau Harbor.

The SAC is located at 206 Curwood Castle Drive, and is open to the public 10 a.m. to 5 p.m. Monday through Friday.

Will you continue to wear a mask despite restrictions lifting?