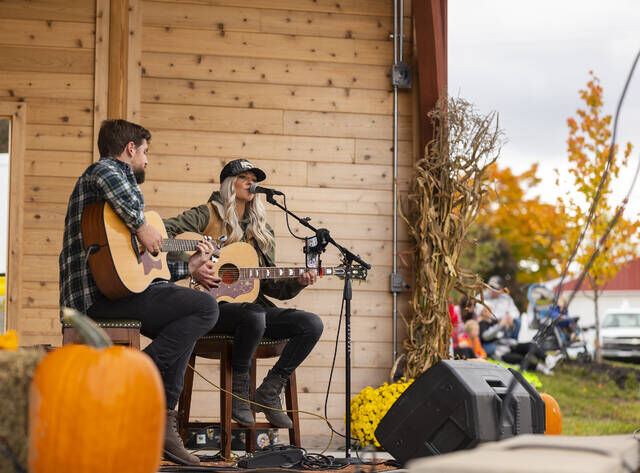 Bath native Sadie Bass, a singer-songwriter competing on the currently-airing 22nd season of NBC's "The Voice," sings for local music enthusiasts gathered at McClintock Park in Laingsburg on Sunday. 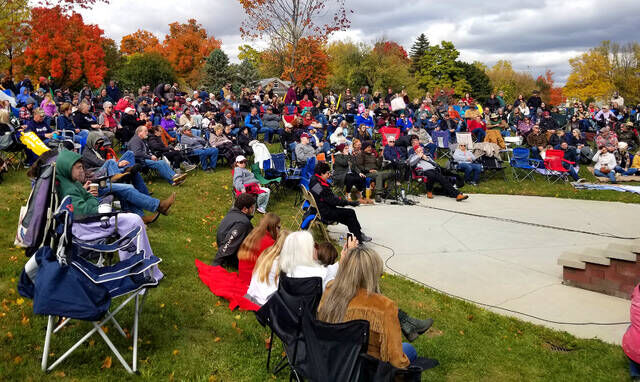 A sizeable crowd turned up to hear "The Voice's" Sadie Bass, of Bath, perform at McClintock Park in Laingsburg Sunday. 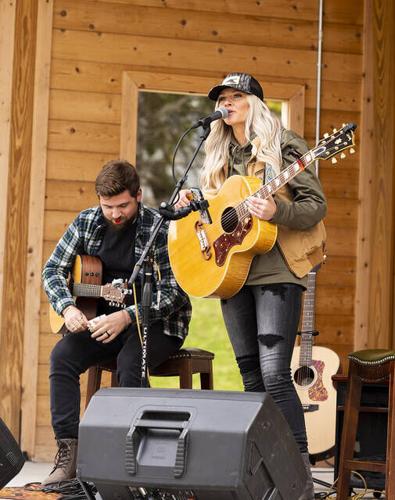 Sadie Bass, a contestant on the currently-airing 22nd season of NBC’s “The Voice” originally from Bath, addresses the audience before her performance at McClintock Park in Laingsburg Sunday.

Bath native Sadie Bass, a singer-songwriter competing on the currently-airing 22nd season of NBC's "The Voice," sings for local music enthusiasts gathered at McClintock Park in Laingsburg on Sunday.

A sizeable crowd turned up to hear "The Voice's" Sadie Bass, of Bath, perform at McClintock Park in Laingsburg Sunday.

Sadie Bass, a contestant on the currently-airing 22nd season of NBC’s “The Voice” originally from Bath, addresses the audience before her performance at McClintock Park in Laingsburg Sunday.

LAINGSBURG — The amphitheater at McClintock Park in Laingsburg has seen plenty of use since its completion in June 2021, but it’s hard to imagine that it’s had a more enthusiastic audience than the one on hand Sunday afternoon to bask in the musical talents of Bath-native Sadie Bass, a Nashville-based singer-songwriter who is a contestant on the currently-airing 22nd season of NBC’s hit show “The Voice.”

Parking was competitive and lawn chairs were abundant as community members crowded in for Bass’s 90-minute set of covers and originals, which began not long after 2 p.m.

“This is like the closest place (to home) she’s ever played before,” said Bass’s manager Emma Keys, “And it’s a free a event for the community, so she was happy to come out.”

Bass, a 2014 graduate of Bath High School who spent one year at Lansing Community College on a softball scholarship before dropping out to pursue music full time, appeared on the second episode of the latest iteration of NBC’s popular singing competition, which aired on Sept. 20.

Following the show’s tried-and-true format, this early episode featured “blind auditions,” in which the four celebrity coaches — which for Season 22 are country star Blake Shelton, R&B crooner John Legend and two generations of pop singer in Gwen Stefani and Camila Cabello — listen to aspiring artists perform hand-picked songs with their swivel chairs facing away from the stage. If they like what they hear, they press a handy button which swings them dramatically around to face performer. If multiple coaches press said button, then a lively repartee ensues with each coach attempting to recruit the fresh-faced singer into their respective stable for future rounds.

Bass performed a cover of Keith Urban’s “Stupid Boy” and earned chair turns from Shelton and Stefani, who are married. In defiance of tradition, Bass spurned Shelton, who typically has a near-monopoly on the show’s country talent, and elected to go with Stefani as her coach.

The primary reason she gave for making this unorthodox decision undoubtedly endeared her to Michiganders everywhere: She felt Shelton lost some enthusiasm he had for her when he realized that she wasn’t originally from Nashville and wasn’t going to take the perceived slight on her home state lying down.

Bass’s roots are undoubtedly important to her — one of the four singles she has released on Spotify, entitled “Holy Ground,” is an ode to her Bath upbringing — and her fondness for home played no small role in her agreeing to play McClintock on relatively short notice.

Sunday’s show was a make-up show of sorts. Laingsburg dispensary Local Roots Cannabis had been sponsoring musical performances throughout the summer, but one wound up being canceled due to inclement weather late in the season, said LRC co-owner Ronda Liskey.

Liskey’s son and co-owner Roy Liskey — a musician himself, who doubled as the opening act Sunday — floated the idea of bringing Bass in as a replacement act for a show in the fall.

“I thought it was impossible,” said Ronda Liskey, “But, as it turns out, one of our employees is very best friends with Sadie,” and Bass turned out to be perfectly willing to make the trip.

“The Voice” airs on Mondays and Tuesdays at 8 p.m. on NBC.

Should the Pledge of Allegiance be recited at Owosso City Council meetings?