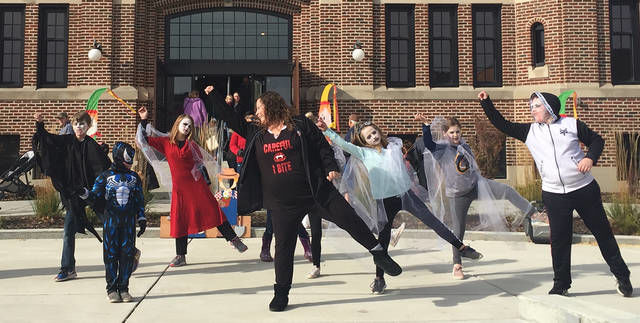 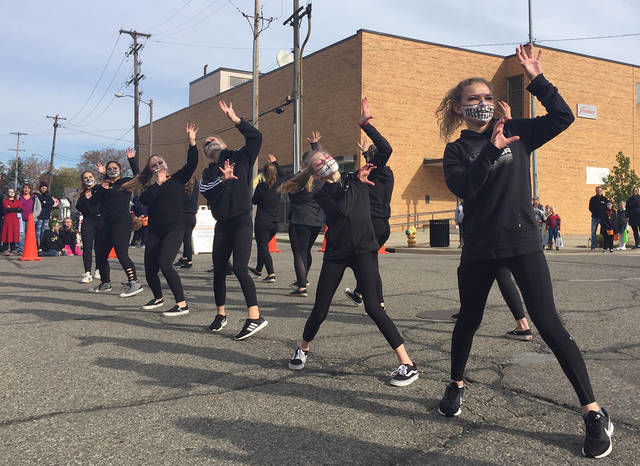 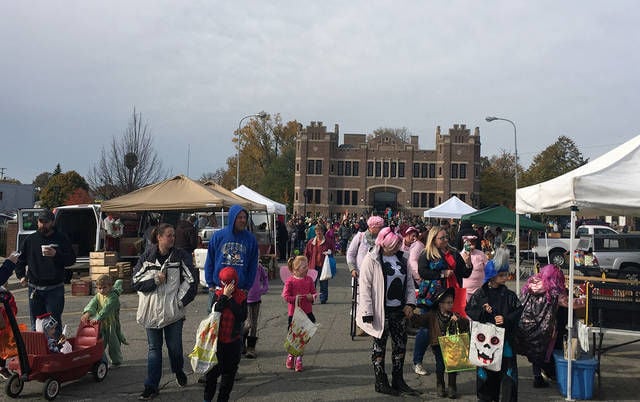 Hundreds of people fill the streets of downtown Owosso Saturday to take part in the city’s annual trick-or-treating event. 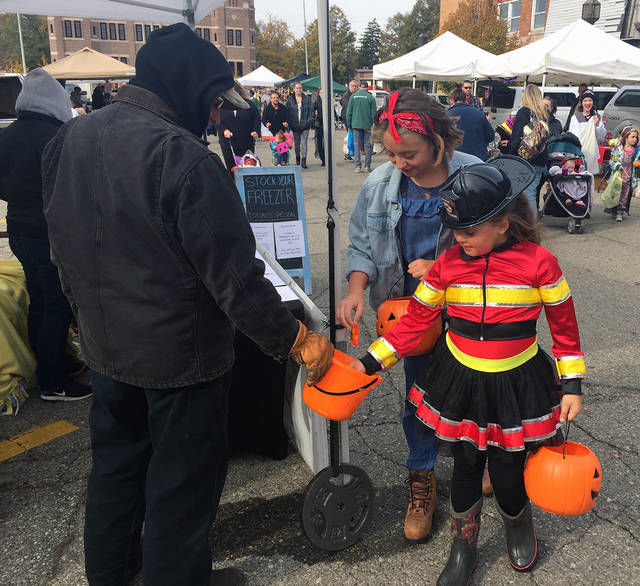 Vendors at the Owosso Farmers Market hand out candy Saturday during the downtown trick-or-treat. 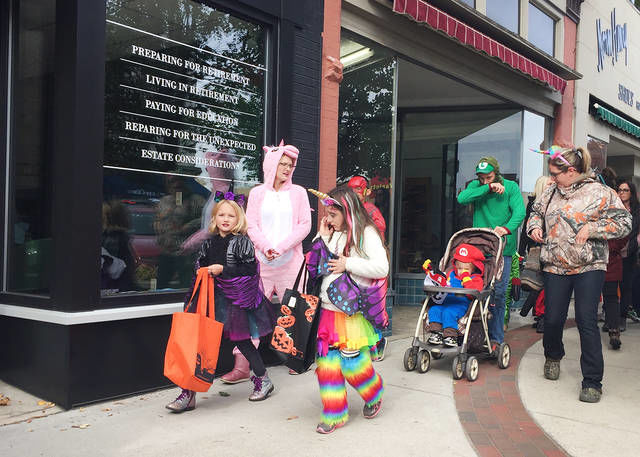 Children and families in costume fill the streets of downtown Owosso Saturday as they gather candy from several area businesses. 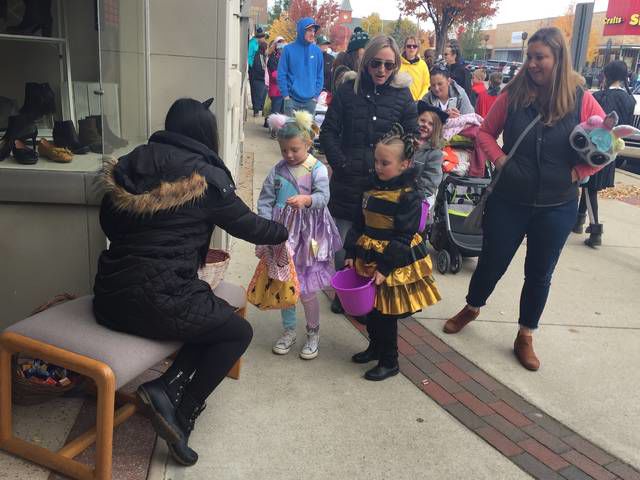 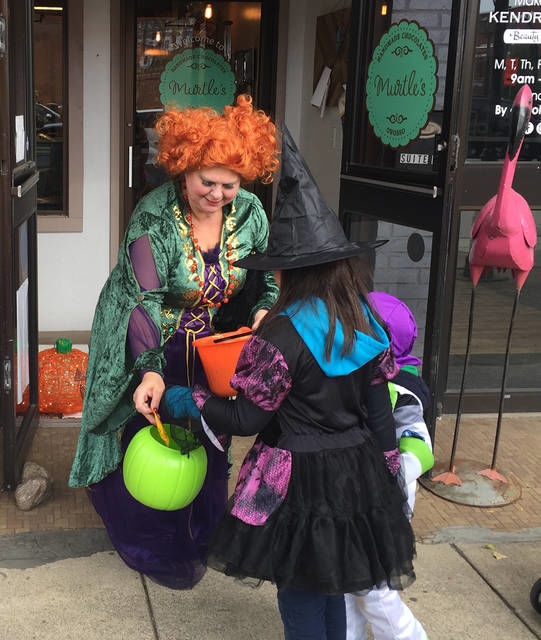 A “witch” receives a treat at a downtown Owosso business Saturday. 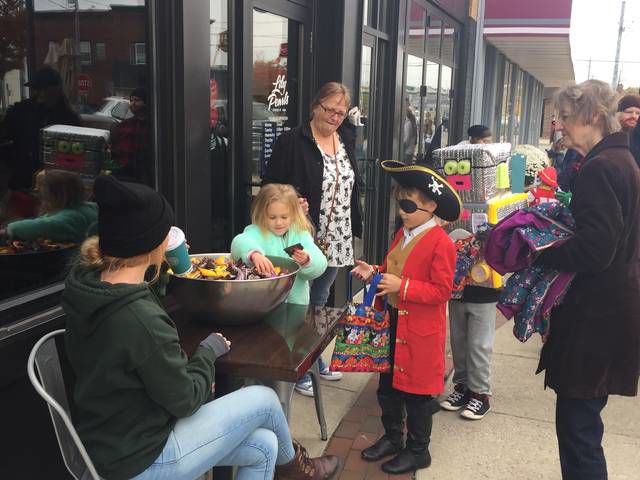 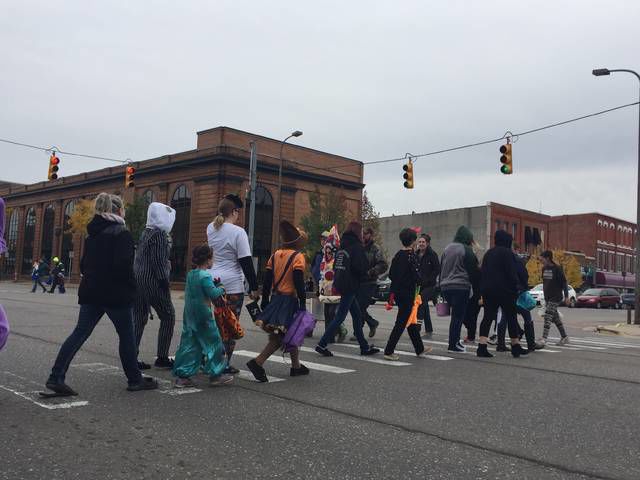 Hundreds of people fill the streets of downtown Owosso Saturday to take part in the city’s annual trick-or-treating event.

Vendors at the Owosso Farmers Market hand out candy Saturday during the downtown trick-or-treat.

Children and families in costume fill the streets of downtown Owosso Saturday as they gather candy from several area businesses.

A “witch” receives a treat at a downtown Owosso business Saturday.

OWOSSO — Superheroes, dinosaurs, princesses and witches were among the many fantastic characters roaming the streets Saturday as the city hosted its annual downtown trick-or-treat.

Hundreds of children and families in costume traversed the streets between noon and 1 p.m. in sub-50-degree temperatures, collecting candy from local businesses.

The hour of trick-or-treating coincided with the final hour of the season for the downtown Owosso Farmers Market, as vendors occupied both sides of Exchange Street from Washington Street to Water Street, as well as each floor of The Armory.

Owosso Main Street Executive Director Josh Adams said he was happy to see the streets packed throughout the morning and early afternoon.

“We love the community coming around and supporting downtown but also we love seeing the downtown support the kids,” Adams said. “We really have a place where people of all different kinds of backgrounds can come to celebrate the holiday and enjoy themselves. It’s great.”

The festivities kicked off at 8 a.m. with more than 20 vendors, offering everything from fresh fruits and vegetables to decorative artwork.

Members of a local dance studio, Ashleigh’s Dance Shack, helped get market patrons into the Halloween mood shortly before noon, performing a set to the music of the late Michael Jackson’s “Thriller.”

The dancers led the children’s costume parade through the farmers market at noon, launching the hour of downtown trick-or-treating.

“It’s events like this that allow people, and especially the next generation, to really fall in love with their community, that’s why we do the downtown trick-or-treat, that’s why we do the glow queen events,” Adams said. “We really want the next generation to harken back like we did and go ‘You know what, I remember downtown.’ Usually it’s never a particular business or a particular event, but it’s how downtown made them feel, and the atmosphere and the community that was birthed out of it, and that’s really what our mission and vision is.”

Market Master Tracey Peltier said she was thrilled to see so many smiling faces downtown.

“Any time there’s a kids thing going on, for me, it’s really special,” Peltier said. “I really enjoy that because I love seeing the families come out, have a good time, have it not cost them anything and enjoy themselves.”

For the final day of the market season, Peltier and her fellow market volunteers decided to try something new, stationing vendors inside The Armory as well as outdoors along Exchange Street, the market’s typical location.

“I loved that, I thought that was a really good feel of having indoor space and outdoor, that was a great collaboration and partnership with the chamber,” Peltier said. “They’ve been huge supporters of the market for so long, and so has downtown Owosso. That’s the thing, we have so many partnerships.”

Peltier added that although she’s sad to see the market season come to a close, she’s looking forward to the extra free time in the offseason.

“It’s going to be really nice to sleep in,” she said.

The downtown Owosso Farmers Market will return May 2.

Reflecting on a busy Saturday downtown, Adams said he’s grateful for the amount of collaboration between local organizations.

“All of the organizations in this community are really good at collaborating to kind of spread that load to where we can have a very active downtown, a very active community, but we’re not getting all wore out. That’s really the success is it’s not one organization in particular, but the group of us being able to link arms under a unified vision,” Adams said. “That community atmosphere is something that is getting lost throughout the country and we want to make sure that Owosso doesn’t lose it.”