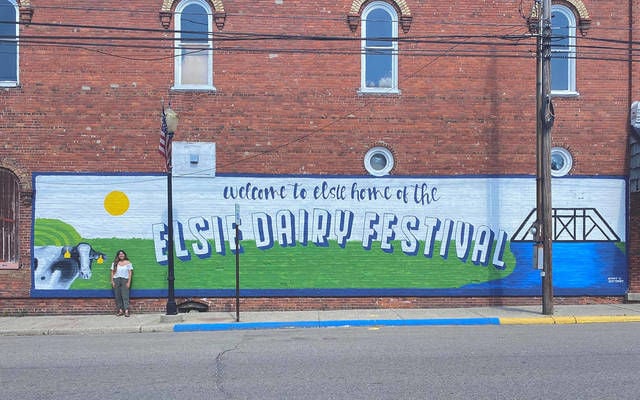 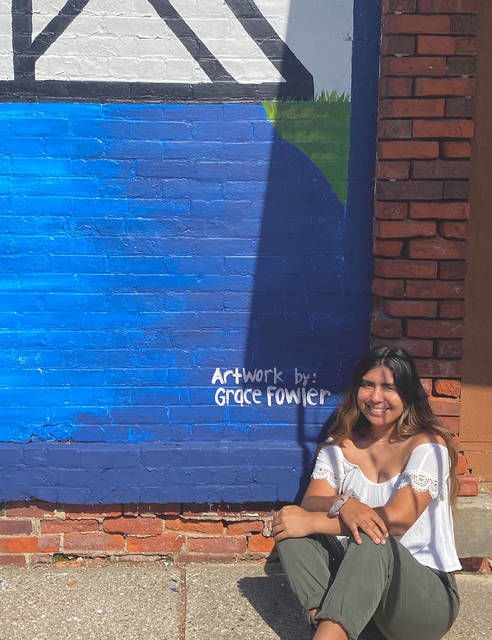 ELSIE — Though the Elsie Dairy Festival has been canceled this year amid the coronavirus pandemic, one local arts student is doing her best to keep the spirit of the annual celebration alive.

Throughout the month of June, Grace Fowler, a 2019 Ovid-Elsie High School graduate and student at Kendall College of Art and Design in Grand Rapids, set to work on making her original design for the festival’s annual mural, 101 E. Main St., a reality.

Now complete, the 500-square-foot composition is a vibrant presence downtown, receiving widespread acclaim from many area residents on social media.

“It feels amazing and I feel so honored that (the festival committee) chose me to do this,” Fowler said. “Just knowing that everyone in my town can see my artwork and see my name in the corner, it’s a really great feeling.”

The Dairy Festival mural has been an annual tradition in the village of Elsie for many years, according to festival President Carolyn Long. Located in the heart of downtown, the work of art serves as a reminder for area residents of when the annual celebration will take place, she said, as dates are repainted on the piece each year.

The task of updating the mural has fallen on various people and groups through the years, Long continued, and was most recently completed by students from Ovid-Elsie High School in 2019.

This year’s festival, originally scheduled to run Thursday through Saturday this week, was canceled due to health and safety concerns from the coronavirus, but that didn’t stop Long and her fellow festival committee members from seeking out Fowler to revamp the mural.

“I was pretty surprised when they contacted me directly,” Fowler said. “Growing up in Elsie I have always seen that mural, and then last year when the high schoolers did it, I thought to myself, ‘I wonder what I would do if the mural was mine?’ It’s crazy because (here we are) a year later and they asked me to do it.”

With the festival committee covering the cost of paint and materials, Fowler set to work on crafting a new mural in early June.

In total, the project — which features the Upton Road Bridge and a dairy cow, among other elements — took roughly nine days to complete, according to Fowler, who indicated she often worked six to eight hours each day on the piece when weather permitted.

It’s the largest work Fowler has completed to date, she said, though she’s also received recognition for her previous works, including a charcoal piece that was displayed on a billboard by the Arts Council of Greater Lansing in 2018.

Fowler was also presented the Janis Kazen Senior Award by the Shiawassee Arts Council in 2019. The $500 scholarship is awarded by the council each year to a graduating senior who plans on pursuing art at a college or university.

“I’ve always loved art ever since I was little, so I’ve always known that I was going to be an artist one day,” Fowler said. “Once I started getting older, I took more biology classes, I even got to dissect a cat in high school, and that really interested me, but I never wanted to give up art. When I heard about medical illustration, which combines art and science, I knew that was perfect for me.”

“I think it looks nice. It’s not real busy and cluttered and it’s very well designed,” Long said, noting Fowler’s initial design was unanimously approved by the festival committee without any revisions. “We’re all very pleased with it. We’ve got a lot of compliments on it (so far).”