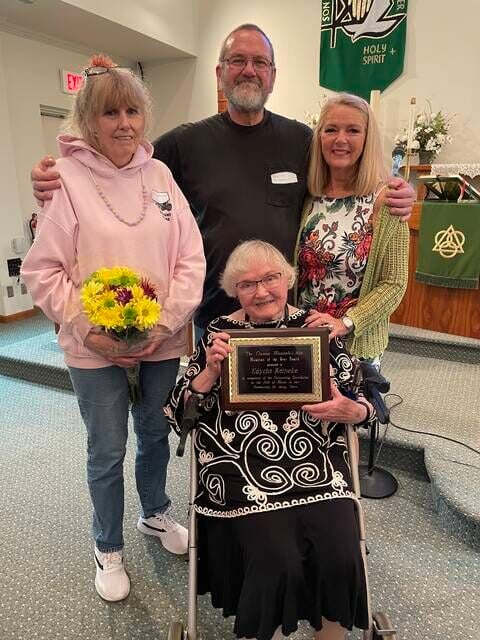 Seated is Musician of the Year Edythe Reinecke. Standing, from left, are Sally Hankins, Steve Hankins and Linda Hankins Sage. 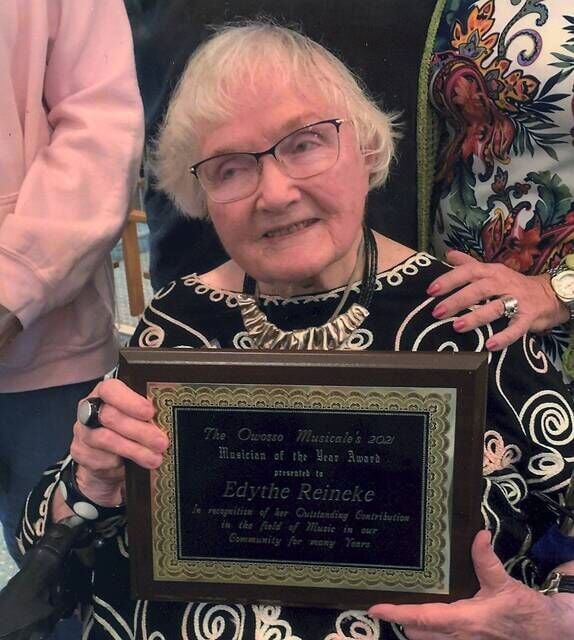 Seated is Musician of the Year Edythe Reinecke. Standing, from left, are Sally Hankins, Steve Hankins and Linda Hankins Sage.

OWOSSO — The Owosso Musicale this week announced its Musician of the Year as Edythe Reincke.

Reincke was honored Sept. 13 during the group’s meeting. Reincke was selected by a committee comprised of Chairwoman Sue Degerstrom, Jan Hintz, Katie Florian and Judy Danzer.

Reincke was cited as Owosso Musicale’s Musician of the Year for her outstanding service in the field of music in the community, group members said in a press release.

Reincke spent more than 35 years performing with the Shiawassee Strings Orchestra. She is a past president of Owosso Musicale.

An oboe solo, “Loillet Largo, Concerto in C major,” was performed by Deborah Knipe, accompanied on the piano by Glenda Davis. Knipe has performed with Reineke for many years with the Shiawassee Strings Orchestra.

According to a biography provided by her daughter, Reineke was born in Cincinnati, Ohio, but moved over the years with her family, landing in Mt. Morris at the start of fifth grade. Her parents purchased her a piano and she taught herself to play “Silent Night” with both hands.

Her family later moved to Wisconsin and New Mexico before returning to Lansing when she was in high school.

In school Reincke took up first the clarinet, then the oboe and it became her favorite instrument.

In 1945, Reincke enrolled at Michigan State University, majoring in music. She attended MSU for three years before getting married and starting a family.

Should Steve Bannon be charged with criminal contempt?