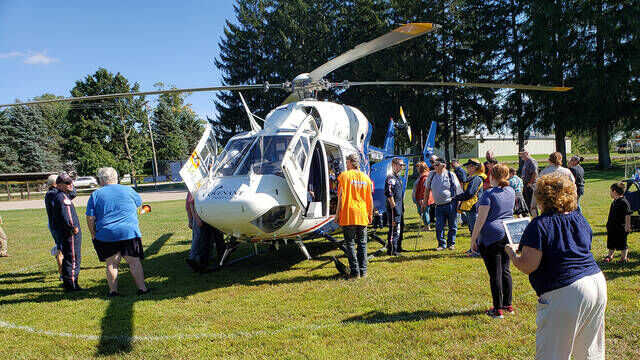 Attendees at a previous Warriors Appreciation Rally in Elsie check out a Life Flight helicopter from Saginaw’s Covenant Healthcare. 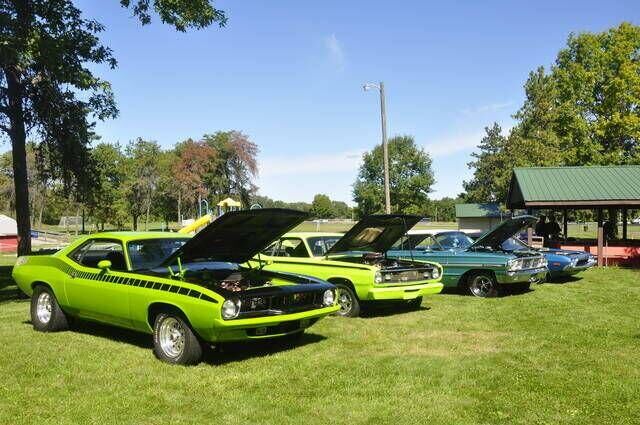 Several classic cars, including a Dodge Hemi 'Cuda, a Dodge Duster, a Dodge Challenger and a Ford Galaxy, are seen at last year's Warriors Appreciation Rally in Elsie.

Attendees at a previous Warriors Appreciation Rally in Elsie check out a Life Flight helicopter from Saginaw’s Covenant Healthcare.

Several classic cars, including a Dodge Hemi 'Cuda, a Dodge Duster, a Dodge Challenger and a Ford Galaxy, are seen at last year's Warriors Appreciation Rally in Elsie.

ELSIE — The Warriors Appreciation Rally (WAR) is a chance to thank public servants who put their lives on the line for their community — and a source of inspiration for children who’d like to be heroes themselves someday.

“It’s a super-big time with all kinds of things to do. It’s also asking, ‘Does somebody wants to grow up to be one of these special people?’ We always need firefighters and police, and we show kids that helping people is cool,” said Gene Nethaway, commander of the Elsie American Legion Post 502, which presents WAR.

Children can get their picture taken while sitting in the pilot’s seat of one of the Life Flight helicopters flying in from the University of Michigan Hospital and Covenant Healthcare, or shoot water from a fire hose.

Young people can also have fun navigating an obstacle course put together by Richard Black, the post’s senior vice commander, who will be sporting his Scottish American Military Society kilt for the occasion.

“I called one of those ninja warrior companies and they wanted $15,000 for an obstacle course for one day, and we’d have to put it up ourselves,” Black said. “So we built our own course.”

Kids will climb over a walk, clear jumps, get through vehicle tires, push a duffel bag attached to a bungee cord uphill, and maneuver around plastic barrels and tunnels. The experience gives children a taste of basic training, he said.

“The best part of the whole thing is just watching the kids go through the obstacle course,” Black said.

“That’s what I like. But what this is really about is for the public to come out and thank our nurses and firefighters and other first responders for what they do.”

Sure to elicit some oohs and ahs out of attendees is a silver Lotus racecar that will be on display, along with about 300 other vehicles in the car show.

Members of the Corunna National Guard Army are bringing to the event a Cougar Mine-Resistant Ambush Protected (MRAP), a light, tactical military vehicle that resists 50-caliber bullets — and another vehicle or two, the nature of which the group is keeping under wraps for now.

Coming all the way from the Battery B, 1st Battalion, 119th Field Artillery regiment in Alma is an M777 howitzer, a towed 155 mm artillery cannon.

“They asked permission to make noise in the park, and they’re going to make noise,” Nethaway said. “That’s a big cannon.”

Firefighters from Berrien Springs, Elsie and Ashley will be back for about the third time, putting on demonstrations and interacting with attendees.

Also making appearances will be police officers from Shiawassee and Clinton counties, and the Michigan State Police. The Shiawassee Veterans Affairs office will be on hand with a van used to transport veterans to medical appointments.

Stan Saylor, a professional accordion player, and musician friends will play live tunes. For the first time, the Ovid-based Jack Clarkson Band will appear at WAR, playing a variety of music including gospel and country.

Taking up an entire park pavilion will be the Michigan Traveling Military Museum. Also coming are vendors and food trucks, veteran service organizations, nurses from the Clinton County Health Department, and a range of experts and government officials.

“There’s going to be so much stuff to do,” Nethaway said. “We’re growing. The village of Elsie has given us use of the 48 acres in Elsie Park, and I think we’ll be using all of them.”