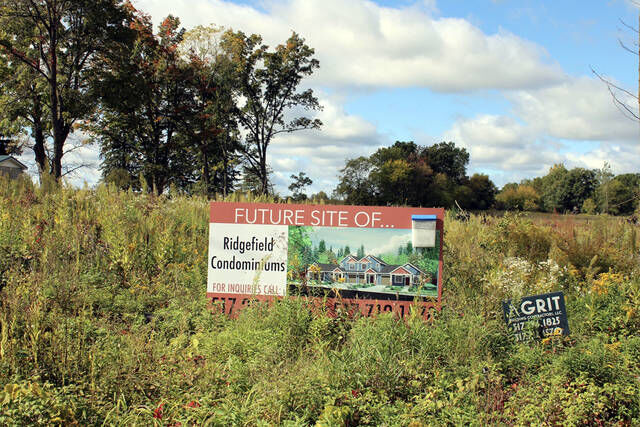 The site of Ridgefield Condominiums is shown Oct. 2. The Morrice Village Council approved a special use permit and site plan for the residential development Tuesday.

The site of Ridgefield Condominiums is shown Oct. 2. The Morrice Village Council approved a special use permit and site plan for the residential development Tuesday.

MORRICE — After years of planning, a proposed condominium development along South Morrice Road has finally received the go-ahead.

Village council members voted 6-0 Tuesday to approve a special use permit, and 5-1 to approve a site plan for Ridgefield Condominiums, with the condition that the developer — Grit Building Contractors — extend the sidewalk along the entry drive all the way to South Morrice Road, with a curb cut installed on the apron.

Construction on the four-building, 16-unit development, located immediately north of Bethany Cemetery, likely will begin in the spring, according to Nick Crugher, co-owner of Grit Building Contractors. The condos will be listed online within a matter of days, he said.

“I just wanted to get into building and do something for Morrice,” Crugher, a village native, said Tuesday. “I know (the community) needed housing and I wanted to put something nice in.

“I’ve been waiting on listing the condos for a while now because I’m the listing agent on the property,” he continued, “so now I can finally get those out there and start getting some bites on it.”

Upon further review of the special use permit and site plan Oct. 15, the planning commission recommended the condominiums be approved by council.

Council member Phil Hruska, who motioned Tuesday to approve the site plan for the project, said the condos will be a great addition to the village.

“It’s something that’s unique and definitely something that we don’t have down in this area so I think it will be good for not only the area, but for the community as a whole and outside of Morrice as well,” Hruska said. “I’ve had people come to me saying, ‘Hey, I really wish there was something out there that you had (like that)’ and there just hasn’t been anything out there, so having that come in will be great for this community.”

The development, once completed, will be spread across four buildings, each featuring two two-story units in the middle with single-story units on each end — all with three bedrooms, two bathrooms and their own garage, for a total of four units per building, according to Crugher.

Each condo will be about 1,300 square feet and will cost about $209,900. Crugher said two units will need to be sold before he can begin construction.

During Tuesday’s meeting, council members questioned how much buffering there would be between the site and adjacent properties.

“At the (edge) of the (development) facing north we’re planning on having pine tree screening to block any headlights,” Britney Shea, whose firm Monument Engineering helped design the project, said. “Along the north side of the (entry) road we’re going to have intermittent plantings, same thing, to help block the light, block the view.

Another issue raised by the council concerned the proposed sidewalk running along the entrance to the development. According to the initial site plan, the sidewalk would stop approximately 33 feet short of the right of way along South Morrice Road.

Acknowledging the future possibility of installing a sidewalk along the east side of the South Morrice Road, Hruska motioned to approve the site plan with the condition that the development’s sidewalk be extended to the road, with a curb cut installed on the apron. The motion carried 5-1, with council member Todd Scott dissenting.

For more information about Ridgefield Condominiums, visit facebook.com/gritcontractors or call Crugher at (517) 712-1570.

MORRICE — Having grown up in the village of Morrice, Nick Crugher has long recognized the ne…