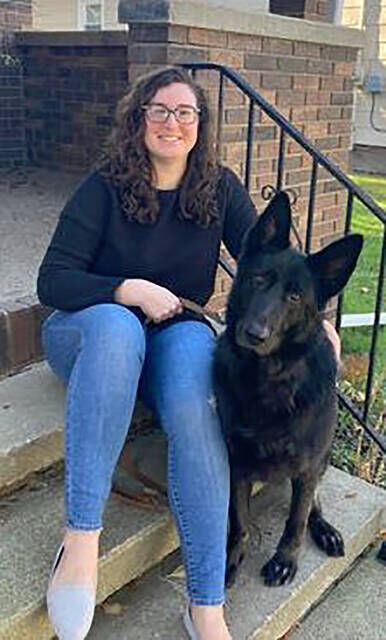 Kaylee VanAtta, owner/trainer of the new Canine Unifursity, is shown with her dog Caine. 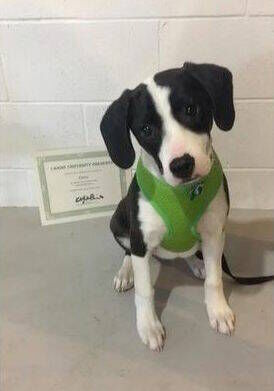 One proud graduate of Canine Unifursity is shown with its "canine good citizen" certificate.

Kaylee VanAtta, owner/trainer of the new Canine Unifursity, is shown with her dog Caine.

One proud graduate of Canine Unifursity is shown with its "canine good citizen" certificate.

OWOSSO — Too many dogs are surrendered to shelters because of a lack of training, Kaylee VanAtta says, and she is trying to change that with her Canine Unifursity.

VanAtta, a graduate of Animal Behavior College who has two dogs herself, said her ultimate goal is to strengthen relationships between pets and owners.

“Training your dogs is a relatively inexpensive thing to do, considering the 16 to 17 hours a day you spend with them, and it helps them out of shelters,” VanAtta, 27, said. “I want to keep everyone happy in their house.”

Canine Unifursity may have a punny name, but the training is serious. Offered in groups or privately, the school offers three progressive levels of obedience training.

There’s also relationship training and problem-solving for dogs that bark too much or dash out of any open door.

Classes are held at local pet stores, outside when weather allows, a move that reduces overhead costs and enables VanAtta to charge lower training fees.

Also, “It’s good to train in places where there’s a lot going on,” she said. “If dogs can handle the training (in a hectic atmosphere), they should be able to do that at home.”

The first group class is set for Nov 16, at a location to be announced soon on canineunifursity.com, and on Facebook and Instagram.

The limit is 10 “students” per class, which runs for six weeks for each level of obedience training.

“People will usually see results in the first lesson,” VanAtta said. “They’ll go home and do the training themselves.”

Classes are aimed at making dogs good members of the family, not show dogs. Techniques include positive reinforcement, but the specific approach depends on the dog’s personality, she said.

VanAtta, an Ovid native, founded Canine Unifursity in 2015 in Lansing.

She attended Northwood University, earning a bachelor’s degree in marketing. Next, she enrolled at California-based Animal Behavior College, which included three months of in-person training. She is also certified in pet CPR and first aid.

“I started this because I took my own dog to training and I loved it,” she said. “I thought, it was the most fun. I have to get into this. I like to see the relationship-building between the dog and owner.”

She had to close her thriving school after the pandemic hit, but decided to reopen it after she and her husband, IT professional Jacob VanAtta, moved to Owosso a few months ago with along with their pets: Caine, a German shepherd, and Niko, a pit bull mix.

VanAtta said she wanted to live closer to friends and family; she also saw an opportunity to be a business owner in a growing local economy.

“Owosso seems to be changing. It’s up-and-coming,” she said. “I wanted to be part of that. This is a good place to start the school back up.”

To enroll in a class, visit the Canine Unifursity website, email VanAtta at info@canineunifursity.com or call (989) 721-0612.

Wonderful news!! I will be passing this awesome information on to friends and fellow pet owners I meet. Love it!