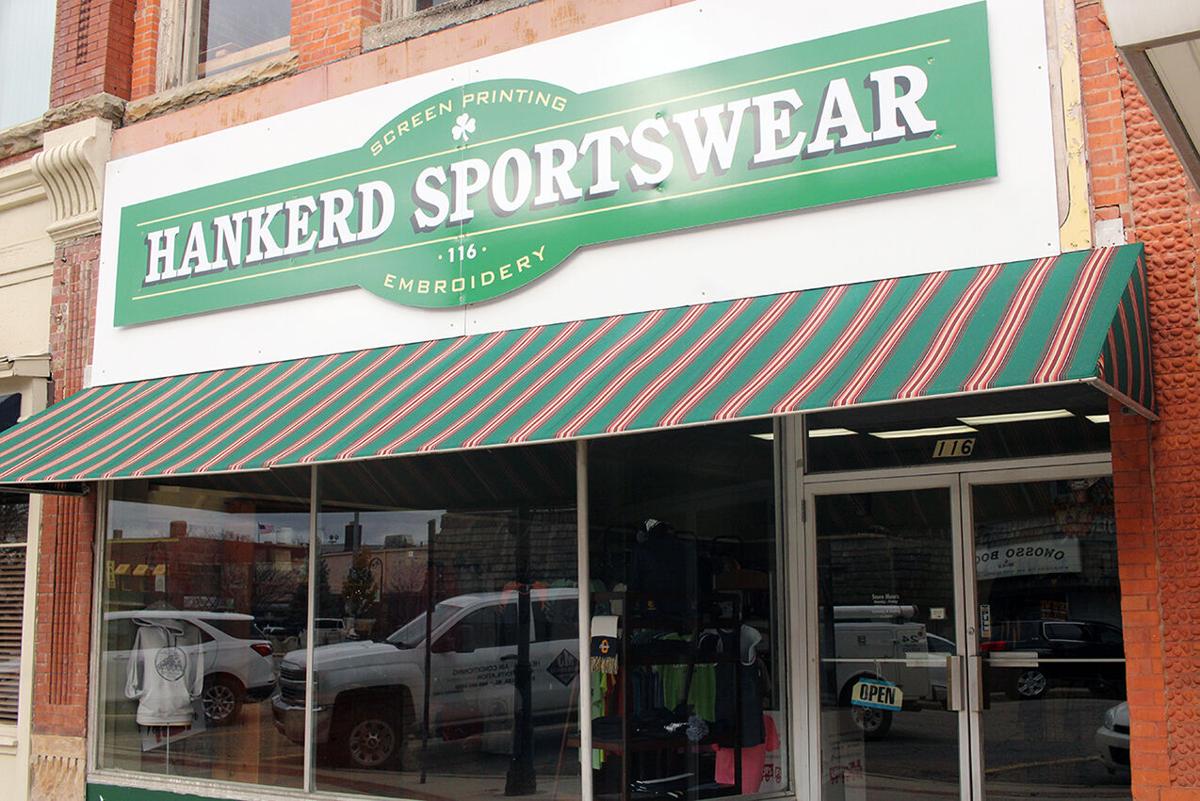 HANKERD'S SPORTSWEAR's outside facade is shown Thursday at 116 W. Exchange Street in downtown Owosso. The business, owned and operated for nearly for the last 20 years by Owosso couple John and Sue Hankerd, will officially have a new owner, Tony Nash, on Dec. 1. 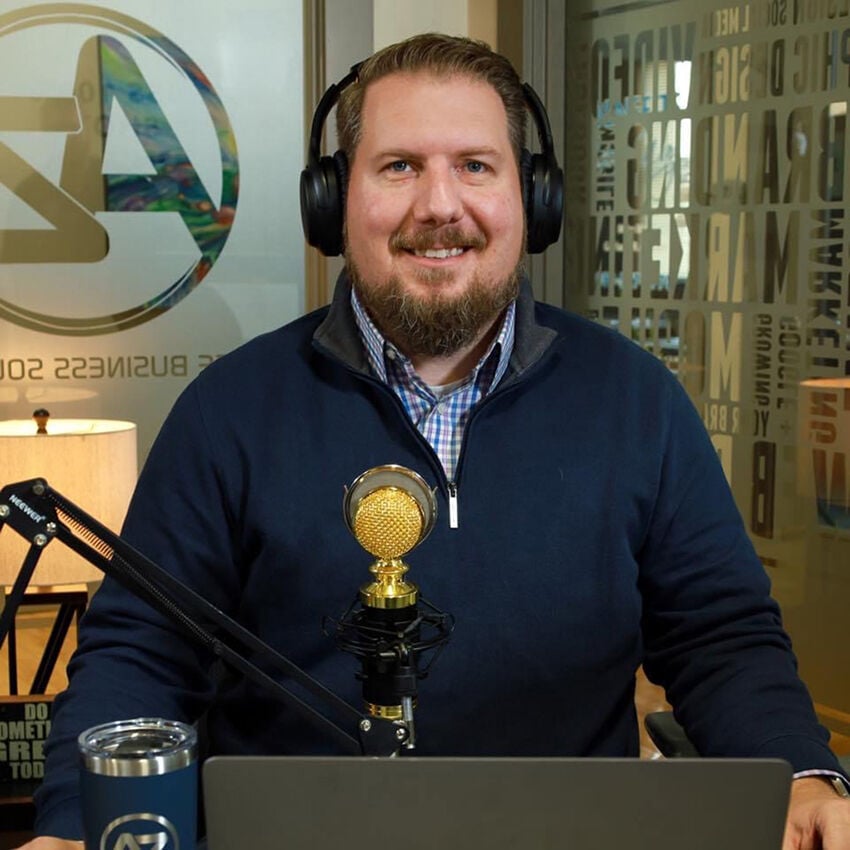 TONY NASH, president of AZee Business Solutions in Owosso, is shown. It was announced that Nash would become the new owner of Hankerd's Sportswear, at 116 W. Exchange St. in Owosso. Nash will take over operations of the business from husband-wife John and Sue Hankerd effective Dec. 1. 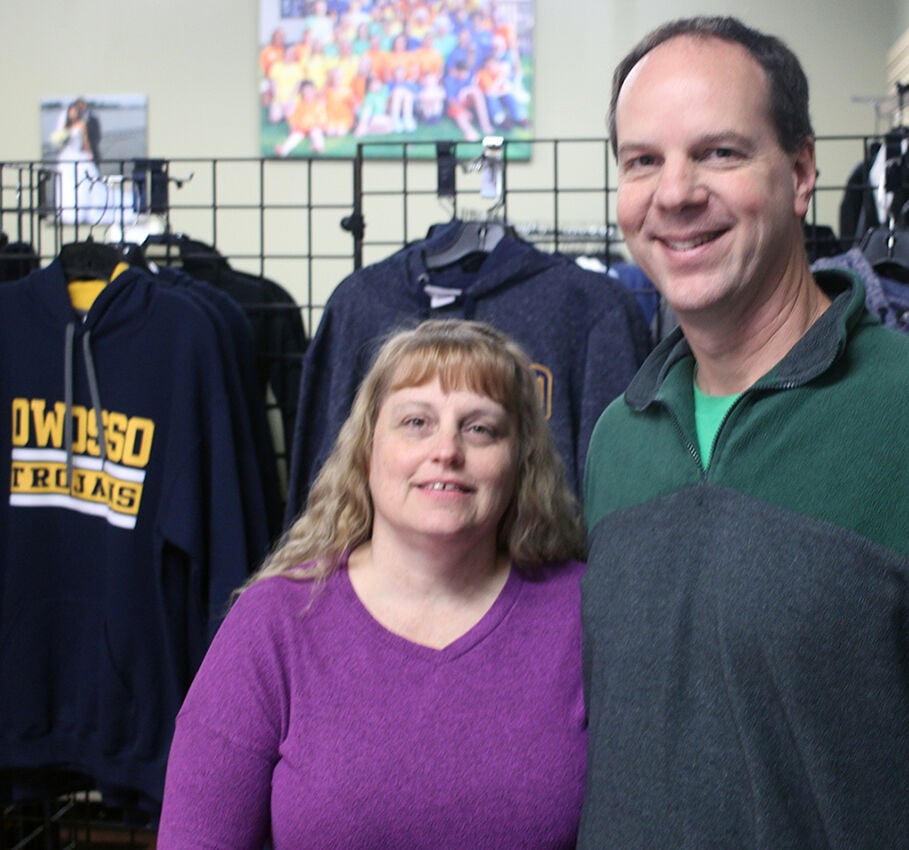 JOHN AND SUE HANKERD are shown at Hankerd's Sportswear Thursday in downtown Owosso. The Hankerds have owned and operated Hankerd Sportswear for nearly 20 years. John Hankerd announced last month that he would be selling the business to Owosso's Tony Nash. Nash will officially take ownership and operations Dec. 1.

HANKERD'S SPORTSWEAR's outside facade is shown Thursday at 116 W. Exchange Street in downtown Owosso. The business, owned and operated for nearly for the last 20 years by Owosso couple John and Sue Hankerd, will officially have a new owner, Tony Nash, on Dec. 1.

TONY NASH, president of AZee Business Solutions in Owosso, is shown. It was announced that Nash would become the new owner of Hankerd's Sportswear, at 116 W. Exchange St. in Owosso. Nash will take over operations of the business from husband-wife John and Sue Hankerd effective Dec. 1.

JOHN AND SUE HANKERD are shown at Hankerd's Sportswear Thursday in downtown Owosso. The Hankerds have owned and operated Hankerd Sportswear for nearly 20 years. John Hankerd announced last month that he would be selling the business to Owosso's Tony Nash. Nash will officially take ownership and operations Dec. 1.

Long-time owner John Hankerd announced last month on Facebook that he and his wife, Sue, have decided to sell the business to Tony Nash, president of AZee Business Solutions in Owosso.

They said the transition has been ongoing the past several weeks and Nash and his staff will officially take over on Dec. 1.

Hankerd told The Argus-Press Thursday that “after nearly 20 years” of operating the business, he and his wife decided to transition to a new chapter in their lives.

“We were kind of thinking about doing it for a while but not serious,” Hankerd said. “The thinking was that someday in the future this is going to be the thing. But that just happened way quicker than we expected. So then the thought became, ‘OK do we do it now or just hold off for a couple of more years?’ But who knows what shape or position we’ll be in, if we can do it now, let’s just do it.”

Nash has served as president of AZee Business Solutions in Owosso for seven years. The Corunna resident has served as a brand consultant to firms in Owosso and beyond. Before that, he managed the Comstock Inn and Banquet Center for four years as well as other motels.

“My family and I are very excited, and my staff, it’s such a good fit with our current business,” Nash said. “We’ve used Hankerd for years as one of our primary printers for the clients that we have now. And so, such a good fit when the opportunity came, I mean didn’t even think about it. I said, ‘Yes. I want to do this.’ “

Nash had a message for customers of Hankerd’s.

“We’ll be taking over Dec. 1,” Nash said. “John and his wife have committed to be around and help through the transition and obviously, with their involvement in the Apple Tree Lane, they’re going to be just around the corner. So they said, “If you need help, we can come over.’ “

Nash said the short term plan is to make the transition as smooth as possible for the customers and staff.

“The plan in the short term is to get to know the business really well and to do things the same way that the Hankerds have done it,” Nash said. “They have such a tradition of quality products and quality service and everyone knows John. And I thought a lot of people knew me but even more people know John.”

Added Nash, “So for the short term we plan to just kind of keep things the way they are until we get to know the business. We’ve been training for several weeks and so actually over a month.”

Nash said he plans to change the name of the business down the road.

“The plan is right now we’re going to keep it Hankerd’s Sportswear for six months,” Nash said. “And then it will eventually be transitioned to AZee Printing Solutions. We’re just going to change from business to printing. Our current business is we do digital marketing, we do web design, video production, we do graphic design, social media management.

And expansion down the road could be in the works, he said.

“We do want to expand upon the business as time and opportunity allows,” Nash said. “We want to continue to be a resource for all of our schools and for local businesses, providing great screen printing, embroidery, sublimation and then we really want to do a heavy marketing campaign so we broaden the region and the name recognition. As far as what other types of printing we may offer someday, I’m not sure about that. But I’m a visionary. If there are other ways we can serve our clients and the community, then I will do that.”

Nash has lived in the area nearly all of his life.

“I was born at Memorial Hospital and have lived in the area my whole life — with the exception of a four-year stint when I ran a hotel out in New York that won some awards for hospitality and customer service,” Nash said. “Then I came here and I was involved in the turnaround of the Comstock, it happened right around the 2012-2015 time, when we were really able to turn that hotel around and bringing a good reputation of service and hospitality.”

Nash said he and Hankerd have a lot in common.

“We both have won Entrepreneur of the Year with the Chamber of Commerce and we share that in common,” Nash said. “Because we both really have deep-rooted committments to our community. And beyond being business owners, we really are passionate about Owosso and our community.”

Nash and his wife, Danica, have six children.

“My wife Danica will be very very involved in the day-to-day at Hankerd’s,” Nash said. “For a while, she’s going to be there everyday. She’s very, very sweet and dedicated and probably put in the most training hours of anybody. And then Tracy Reath, who works for me currently, who also actually happens to be my sister, she is going to be like the manager.”

Hankerd said he believes the business was located on Main Street about eight years before he bought the building at 116 W. Exchange, between Raymond James and Sobak’s Home Medical Supplies, and moved his business there.

“It’s really all apparel,” Hankerd said. “We do office stuff too, the polos. So we do the embroidering and the screen printing and anything with apparel.”

Hankerd said business has been moving briskly this year. Schools and businesses are open and running as our sports and sports teams. There is a good demand for uniforms and other sporting apparel.

“That’s why it was a hard decision,” Hankerd said. “This will be the best year we’ve ever had. Last year, 2020 was not great because of the pandemic — all the schools were shut down and sports and all of that. And so we were really worried on whether it would come back in a way. But we’re going to end up with this year being the best year we’ve ever had. Then we think about that and say, ‘Should we really sell now while things are continuing to grow?’ But you don’t know what’s going to happen in the future.”

Hankerd, born in Gaines, said he came to Owosso 35 years ago when he was 18.

His wife has lived here all of her life, he said.

The Hankerds have four children and three grandchildren and Hankerd said that also played a role in the decision to sell.

“It kind of did,” Hankerd said.

“There’s been times when we’ve wanted to do stuff with our grandkids but we had to be here to work. And so now we don’t have that slowing us down and we can just go and live our life and have fun.”

So what will the new chapter hold for the Hankerds?

“We don’t know,” Hankerd said. “As a business owner, you work all the time. It’s like, you work late into the night and we’re here all of the day. No, I honestly don’t know. We do want to take a break. I think we want to take a little time just to be together and not run one thousand miles an hour.”