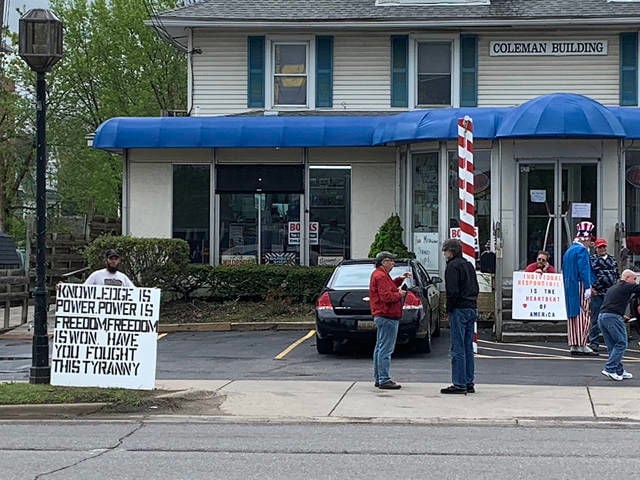 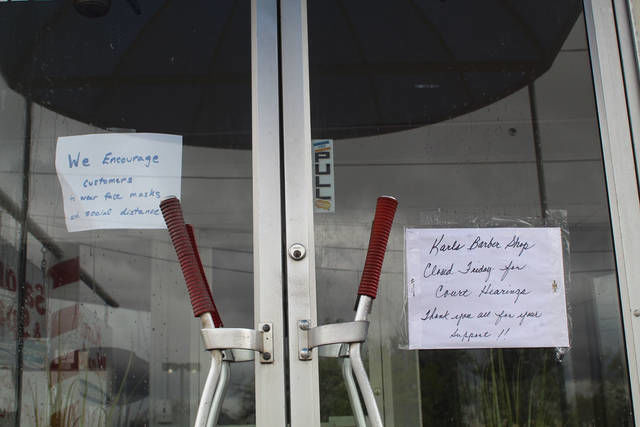 A letter taped to the doors of Karl Manke's barbershop in Owosso Friday states his shop will be closed for an upcoming court hearing.

A letter taped to the doors of Karl Manke's barbershop in Owosso Friday states his shop will be closed for an upcoming court hearing.

In its filing, attorneys for MDHHS said that Manke’s “continued operation of a barbershop posed a significant risk to the public health in light of the COVID-19 crisis… When faced with a highly infectious, deadly disease such as COVID-19, every second counts… Every second that Manke operates his barbershop poses a significant danger to the health and lives of the people of the State of Michigan.”

No dates or proceedings were scheduled Friday on the circuit court online docket, but are possible as soon as Monday.

Stewart declined to issue a temporary restraining order Monday after an initial request from MDHHS, essentially ruling that he would not issue the order without giving Manke notice and opportunity to present his case in court. Following Stewart’s ruling, Manke vowed to continue giving hair cuts.

As of 3 p.m. Friday, however, a note posted on the front door said Manke’s shop was closed for “court hearings.” It is unclear how long Manke’s shop will remain closed, but he has indicated that he plans on resuming cutting hair as soon as possible after court proceedings have taken place.

Manke reopened his barbershop last week despite Gov. Whitmer’s executive orders instructing all non-essential businesses to close, and has been operating it since, attracting local, state and national media attention for his refusal to close, despite receiving two citations from Owosso police last week and a cease-and-desist order May 8 from the MDHHS. On Thursday, Michigan Attorney General Dana Nessel summarily suspended Manke’s business and barber’s licenses. Manke is contesting that suspension, and is seeking a hearing of his own in circuit court.

“Manke remains steadfast in his refusal to close his barbershop — despite being advised (numerous times) of the fact that doing so violates the law and creates a significant public health threat,” the MDHHS filing states.

“Death is an irreparable injury,” the filing continues. “The circuit court abused its discretion in concluding otherwise.”

An email to Manke’s attorney David Kallman seeking comment on the status of the appeal or whether a hearing had yet been scheduled was not returned before press time.

Additionally, Manke still faces two misdemeanor charges stemming from reopening his shop last week. Kallman called the charges “illegal and unlawful because the legislature refused to extend her declared state of emergency,” and said he plans on filing motions to have the charges dismissed.

In response to the COVID-19 pandemic that has killed more than 86,000 Americans, Gov. Gretchen Whitmer previously issued an executive order requiring businesses that are unable to practice “social distancing” to remain closed at least until May 28. Such businesses include dine-in restaurants, barbers, hair salons and other close-contact businesses. Other businesses have slowly been reopening.

Since reopening May 4, Manke has claimed to have worked up to 15 hours per day and often had lines of people outside his building, 421 W. Main St., many of whom did not wear masks or maintain a 6-foot separation. Dozens of protesters also stood outside his shop on several days and also did not take part in recommended safety precautions.