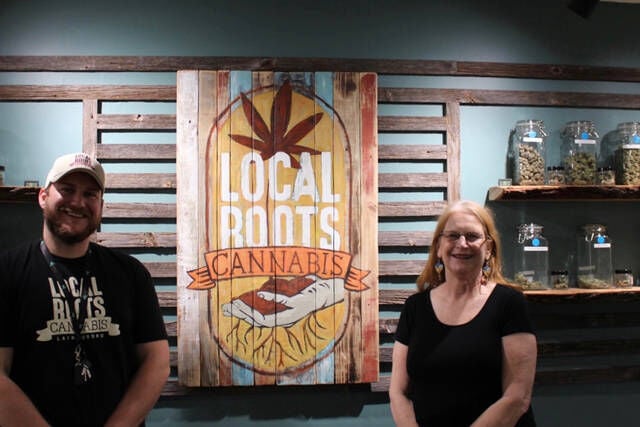 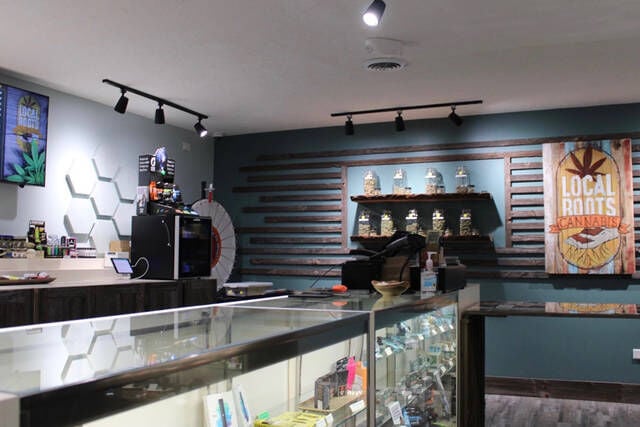 A look inside Local Roots Cannabis. The shop is open from noon to 8 p.m. seven days a week.

A look inside Local Roots Cannabis. The shop is open from noon to 8 p.m. seven days a week.

LAINGSBURG — Ronda Liskey has lived in the Laingsburg area for nearly 40 years, employing a community-first mindset that’s led her to donate countless hours in support of school programs.

In the mid-1990s, she went so far as to launch a horticulture club at Laingsburg Middle School, garnering the program national attention on ABC’s Good Morning America during her 10-year run as director.

Driven by a continued passion for gardening — and a growing appreciation for the medicinal benefits of marijuana — Liskey and her son Roy recently opened Local Roots Cannabis, a medical and recreational marijuana provisioning center at 120 W. Grand River Road downtown.

The family-owned and operated facility offers a diverse array of marijuana products, from the flower itself to edibles, concentrates and vaporizers. The space also incorporates many comforts of home, with couches in the lobby and concert posters along the walls.

For the Liskeys, the venture is a culmination of two passions: cannabis and the community.

“We feel like we captured the kind of feel we want for Laingsburg,” Ronda Liskey said Thursday. ” It’s homey, comfortable and unassuming. We’re getting a lot of people from the community, they want to just see what’s going on, but their reaction is great, they’re like, ‘Wow, this is a wonderful addition to the community.’”

“People who don’t use cannabis at all have come up to me and said, ‘It’s awesome what you’ve done to that building,’” Roy Liskey added. The business has already drawn patrons from surrounding areas, including Perry, Owosso and St. Johns, he said.

Having been a gardener her entire adult life, Ronda Liskey was eager to become a marijuana caregiver following the passage of Michigan’s medical marijuana law in 2008. Liskey was one of the first Michigan residents to receive a caregiver license, which allowed her to grow marijuana for up to six patients, including herself, at a cap of 12 plants per patient.

“I wanted my whole life to grow the plants, you know, because I’m a gardener and big into flowers,” Liskey said, adding “these flowers are not only beautiful, they’re medicinal.”

The medical benefits of marijuana are undeniable, according to Liskey, who noted the plant has helped alleviate pain for numerous friends battling arthritis and cancer, among other ailments.

Roy Liskey was introduced to the legal market for recreational marijuana while completing a hospitality internship in Colorado. The experience left an impression, piquing his interest to the point where he wanted to get involved in the industry.

Liskey moved back home to Michigan ahead of the November 2018 election, casting his ballot in support of legalizing recreational marijuana. Michigan voters approved the proposal by a comfortable 56-44 percent margin, which led Liskey to consider possible business ventures in the industry.

After initially considering the idea of a microbusiness, the Liskeys settled on an application for a retail establishment. The Laingsburg City Council approved the Liskeys’ petition for special land use, site plan amendment and license application in August 2020.

Prior to opening April 1, the Liskeys did their fair share of research, launching into a “discovery period” to decide which products to sell.

“We wanted to make sure we are offering the best, highest-quality products at the most reasonable prices and so we tested a lot of things, which was fun,” Ronda Liskey said with a laugh. “We have really selected these products to accommodate our goal which is the best stuff at the best prices.”

The Liskeys are offering 10 percent off to first-time customers through the end of May, but that’s far from the only service they’re providing to the community. The duo has already sponsored a show for Laingsburg’s annual summer concert series, to be held at the city’s new amphitheater in McClintock Park, and they also have tentative plans to launch their own Local Roots concert series in July.

“We love this town, we really do,” Roy Liskey said. “I’ve lived in a few different communities over the past five years and the sense of community here is so strong. For me, the most fulfilling part of it, the driving force behind (this business) is to contribute to this community.”

Local Roots Cannabis is open from noon to 8 p.m. seven days a week. For more information, call (517) 881-0585 or visit localrootscannabis.com.