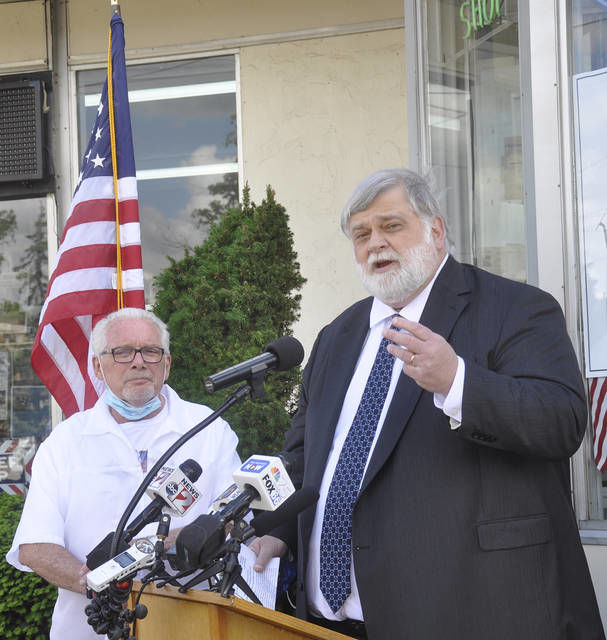 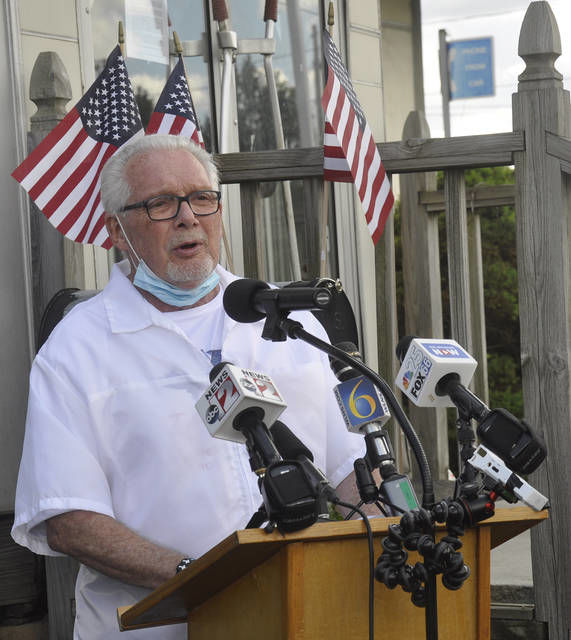 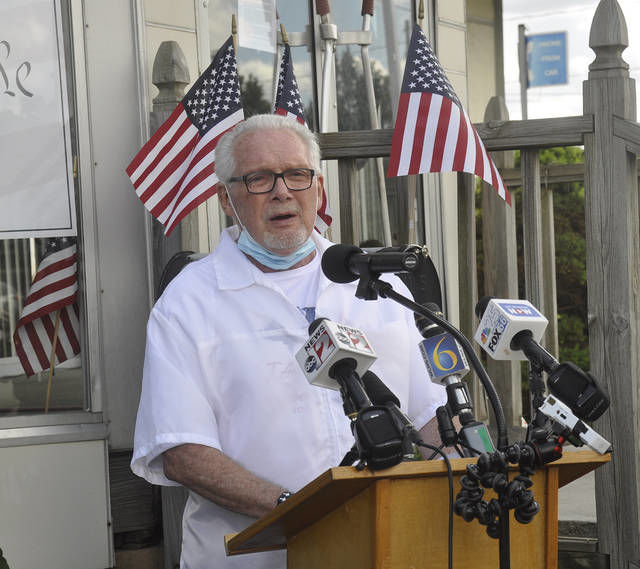 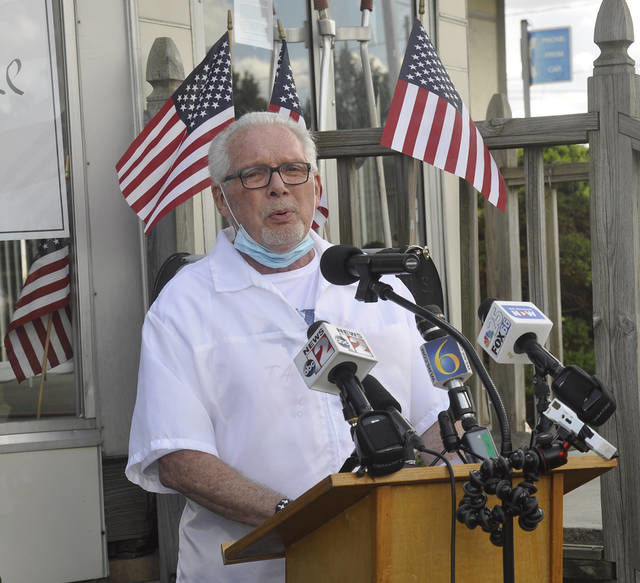 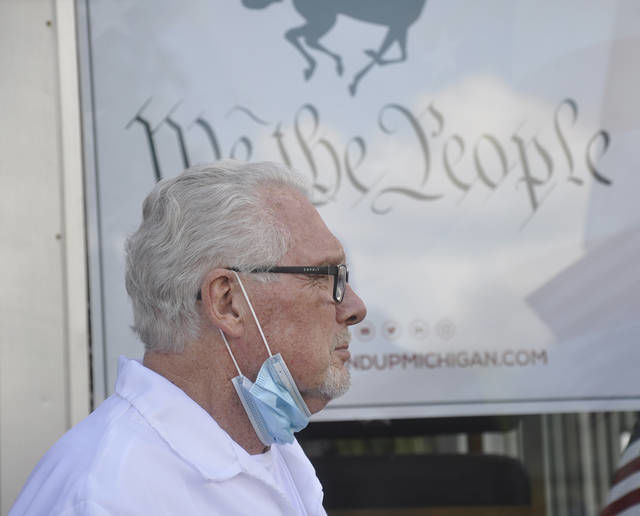 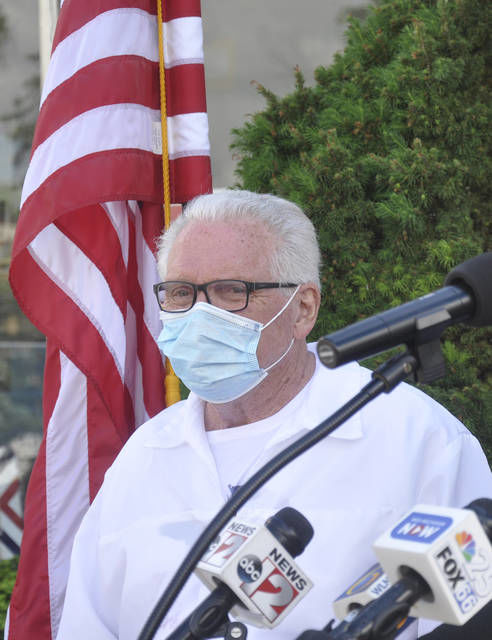 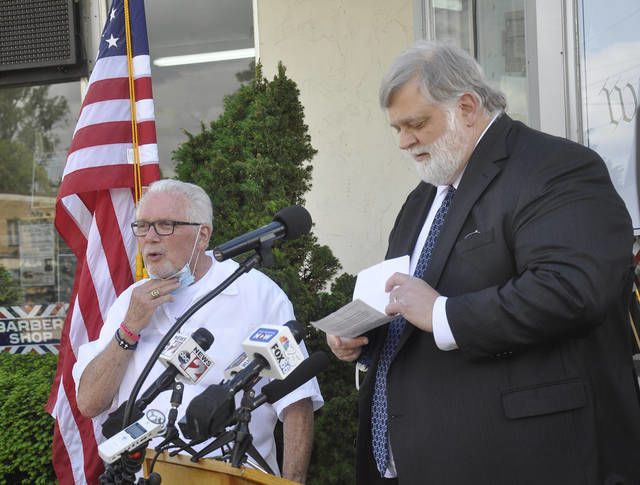 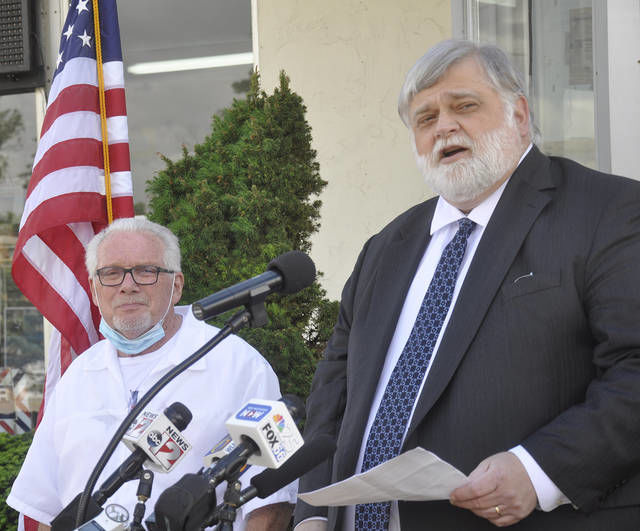 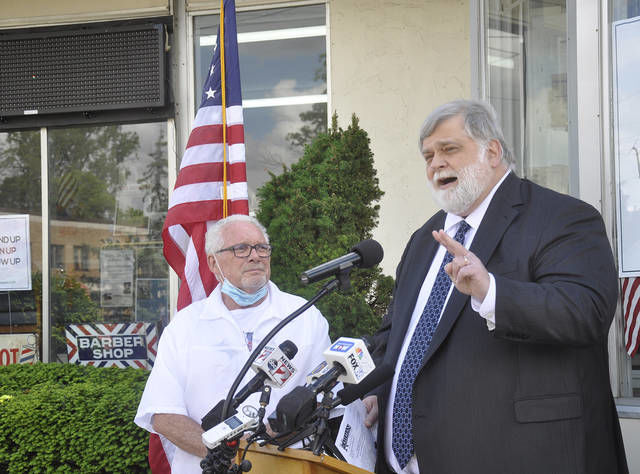 During an hour-long press conference Saturday in front of his barbershop, 421 W. Main St., Manke let it be known that he will continue cutting hair despite a preliminary injunction issued Friday by 35th Circuit Court Judge Matthew Stewart ordering him to immediately suspend all operations.

“I have a 60-year-old business here and (Gov. Gretchen Whitmer is) pulling my license. She’s going to padlock my doors. She’s placing me under a threat of jail,” Manke said. “I’m 77 years old, I’ve got one foot in the grave and the other on a banana peel. I could care less about all this nonsense. I’m going to continue opening my shop, I’m going to continue working as a free American. This is not the Michigan I know and it’s certainly not the America I grew up under.”

According to Manke’s attorney David Kallman, the Michigan Court of Appeals has denied the 77-year-old barber his right to a due process, illegally remanding the injunction case back to the trial court for Stewart to enforce without conducting a full hearing as required.

Barbershops and hair salons in Michigan have been under an executive order issued by Gov. Gretchen Whitmer requiring them to quit providing services until further notice. Since May 4, however, Manke has been defying the order as first city officials and then state officials fought him in court.

In the latest legal volley, appeals court judges Stephen Borrello, Amy Krause and Brock Swartzle issued an opinion Thursday reversing Stewart’s prior denial of a temporary restraining order, though the ruling wasn’t unanimous on some points. In Swartzle’s concurring opinion, he outlined a number issues he deemed legal errors.

“The majority has ordered ‘an immediate reversal’ of the trial court’s denial of preliminary injunctive relief without formal submission to a merits panel drawn randomly from the entire court, without oral argument, without the opportunity for amici briefs, and without a unanimous vote by this motions panel,” Swartzle wrote. “To my reading, the majority’s relief appears to be a peremptory reversal, which seems procedurally irregular given that the panel’s vote was not unanimous on this issue.”

In response to the appeals court’s decision and order to Stewart, Kallman filed his own appeal Thursday afternoon with the Michigan Supreme Court, which he said effectively placed an “automatic stay on the Court of Appeals order,” meaning it could not be enforced. As a result, Stewart did not sign the preliminary injunction order Thursday, Kallman added.

Friday, however, the Michigan Attorney General’s Office filed another emergency motion asking the Court of Appeals to issue a second order to remand the injunction back to Stewart, this time adding the word “immediate” to the order, according to Kallman.

The new order was issued by the Court of Appeals Friday afternoon, Kallman said, with Stewart subsequently issuing the preliminary injunction to suspend Manke’s business operations until further notice.

“By 4:30 p.m. Friday,” Kallman said, “we had filed emergency motions with the Supreme Court asking that the Supreme Court issue another stay, making it crystal clear to the Court of Appeals they can’t do what they’re doing.

Hearings on the latest appeals have yet to be scheduled.

A representative for Attorney General Dana Nessel's office Saturday said they had no comment on the latest development.

Manke, who has offered haircuts and even took part in a hair-cutting protest at the state Capitol, said he has no intention of stopping. Manke said he needed to make money and declared the “government is not my mother.”

Manke continued to cut hair despite the suspension of his business and barber licenses. He challenged that suspension, but an administrative law judge this week also ruled those suspensions can stand. He faces a potential $1,000 fine for each hair cut he gives.

During Saturday’s press conference — which drew a crowd of roughly 30 people, along with multiple media outlets — Manke questioned why certain forms of business, dental hygienists among them, have been permitted to go back to work in accordance with Whitmer’s orders while barbers have not.

“When I’m cutting a person’s hair on the top of their head — and my combs are not tongue depressors — I don’t see where there’s a health risk with anything that I’m doing provided I’m following the (CDC) rules for this,” Manke said. “The governor says she still does not have a plan to open up barbershops, gyms or a restaurant. She acts like a stepmother, a cruel stepmother, and she’s not my stepmother and she’s not my mother. She does not know what is best for me.”

After Owosso police cited Manke with two misdemeanors on May 6, the Michigan Department of Health and Human Services served him with a cease and desist letter on May 8 and then sought a TRO when he refused to stop cutting hair.

On May 11, Stewart denied a request by the AG’s office to issue a temporary restraining order requiring Manke to close, saying, in part, that since Michigan State Police troopers didn’t arrest Manke on May 8, there was no emergency and a hearing could take place at a later date.

On May 14, the Michigan Department of Licensing and Regulatory Affairs served Manke with notice his license was suspended.

On May 20, Stewart denied the state’s second request. He said there was no particular emergency requiring immediate action.

Manke still faces the two misdemeanor citations issued by Owosso police. He faces 90 days in jail and a possible $1,000 fine. A hearing in 66th District Court is scheduled for June 23, but Kallman has said he plans to file motions to have the citations dismissed.

Nonetheless, the 77-year-old said he has no plans of closing his business.

“I’m not going to back down, I will not,” Manke said. “I look forward to the opportunity for the Michigan Supreme Court to hear my case. I’m looking forward to that because in my heart I know the Constitution that we have had people live and die for will be supreme.

“This is not just about me, it’s about all of us,” Manke continued. “This is about all the business owners who are still held hostage by our government, about all the people locked up in their homes fearful to come out because of some concept that they’re going to get this virus.”

CORUNNA — The Owosso barber who opened his shop in defiance of state executive orders today saw his license suspended, according to his attorney.