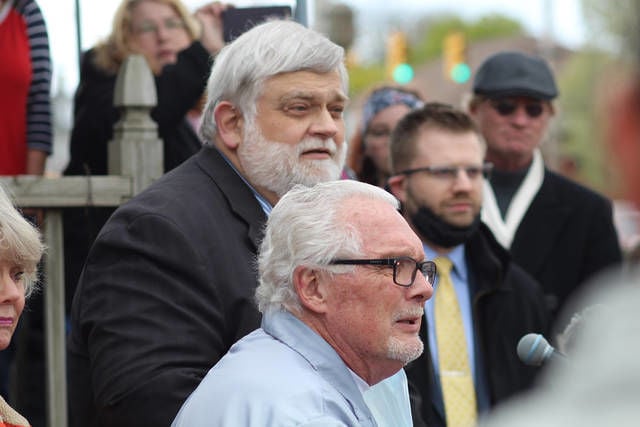 Salon owner Shelley Luther holds a citation and speaks with a Dallas police officer after she was cited for reopening her Salon A la Mode in Dallas, Friday, April 24, 2020. Hair salons have not been cleared for reopening in Texas. Luther was asked by officials to close and was issued a citation when she refused. Luther said she will remain open for business.

Salon owner Shelley Luther holds a citation and speaks with a Dallas police officer after she was cited for reopening her Salon A la Mode in Dallas, Friday, April 24, 2020. Hair salons have not been cleared for reopening in Texas. Luther was asked by officials to close and was issued a citation when she refused. Luther said she will remain open for business.

OWOSSO — Owosso barber Karl Manke, whose license was suspended by the state because he refused to close his shop, will conduct a press conference this afternoon with a Texas hair stylist who also defied authorities to open her shop.

According to a press release, the pair will “… both be speaking in support of other small business owners who are finding themselves in dire financial straits and needing to open up to survive.”

In March, Gov. Gretchen Whitmer declared a state of emergency and issued executive orders closing most businesses in Michigan, including hair salons and barbershops. Since then, she has extended those orders through at least May 28. Businesses allowed to open are required to limit gatherings to fewer than 10 people, use masks and ask people to remain 6 feet apart.

The orders have been challenged by some as unconstitutional. There are court cases underway to overturn Whitmer’s orders.

Manke, 77, has become a hero of sorts to people in Michigan and nationally who believe COVID-19 risks are overstated and insist businesses can reopen safely, the press release claims.

Manke, who has been a barber since the early 1960s, opened his shop May 4 to large crowds, inside and out. He said he cut hair up to 15 hours per day as people crowded into his shop — many not wearing masks or social distancing. Outside, sometimes dozens of supporters gathered — also without safety precautions — waving signs and flags, and sometimes armed in a daily display.

Manke claims he must operate his business to survive. Others have disputed that, saying he owns property, is an author and could receive Social Security, among other income sources.

On May 6, Manke was issued a pair of misdemeanor citations for violating health and safety orders, however he remained open.

On May 8, Michigan State troopers presented Manke with a cease-and-desist order from the Michigan Department of Health and Human Services; he continued offering hair cuts throughout the weekend.

On May 11, 35th Circuit Court Judge Matthew Stewart said because state officials did not immediately shut Manke down the previous Friday, the situation was not an emergency and he could continue operating until a court hearing.

Thursday, the Michigan Department of Licensing and Regulatory Affairs served Manke with notice his license was suspended. The suspension threatened $1,000 fines per hair cut. The MDHHS also filed an appeal Thursday seeking to reverse Stewart’s decision and obtain a temporary restraining order.

Friday, a sign on his shop said he was closed for “court hearings.”

According to the AG's office, the MDHHS filed an emergency application for leave to appeal with the Michigan Court of Appeals. Manke's response is due by noon today. No hearings have been scheduled, but the AG's office said the court could rule without a full hearing.

In addition, Manke must respond to the MDHHS motion seeking preliminary injunctive relief by May 22. A hearing on that motion has not been scheduled.

Since Manke first reopened his shop, an additional 42 people have been diagnosed with COVID-19 and eight more deaths have been reported in the county, bringing those totals to 227 and 20.

Luther, owner of Salon a la Mode, was briefly jailed by a Texas judge after she defied orders to keep her business closed. She was sentenced to seven days in jail, however, the sentence was overturned.

She continued to operate her business despite a cease-and-desist letter from Dallas County Judge Clay Jenkins and a temporary restraining order Judge Eric Moye signed that told Luther her business must remain closed.

Luther said she kept her salon running out of necessity — “I need to feed my family, and my stylists could not feed their families,” she said — and that she only recently received the federal loan she applied for.

According to Texas news reports, Denton County appraisal records show Luther owns two residential properties: a home on a 1-acre lot valued at $292,256, and a 4-acre lot with a horse stables valued at $103,768. She also owns $23,620 worth of business personal property at her salon in Dallas County. Facebook posts note she owns “six horses, three mini-horses, two donkeys, 11 goats, three ducks, six dogs, a wallaby, a ringtail lemur and a bengal cat.”

Moye found Luther in contempt of court, sentencing her to a week in jail and ordering her to pay thousands of dollars in fines.

“Karl, like many of the barbers and hairdressers in Dallas, is a fixture of the community, and has cut hair for generations of Michigan families,” Luther said in the press release. “Gov. Whitmer has denied him the right and ability to support his family and meet his financial obligations. Along with Texas, Michigan needs to open for business safely and it needs to happen now. The economic burdens as well as the collateral damage caused by these overextended closure orders are crippling our economies and plunging many small business owners into despair and bankruptcy.”