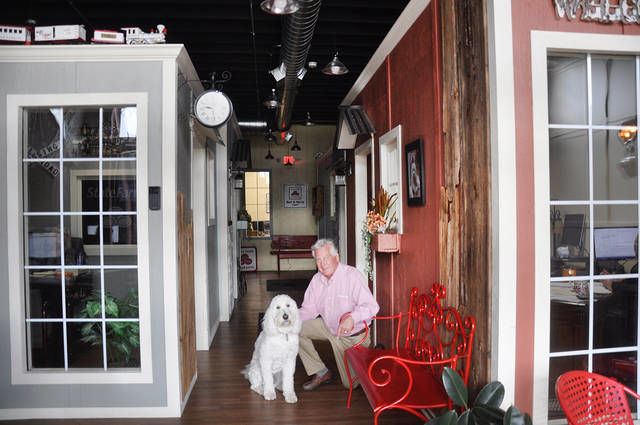 Bart Harris and his goldendoodle are seen inside his new office. 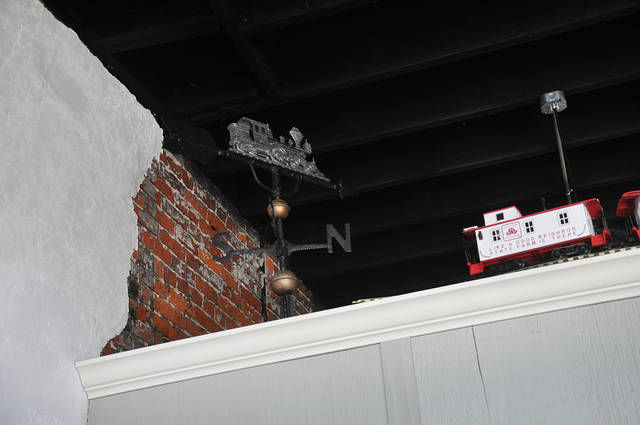 Bart Harris and his goldendoodle are seen inside his new office.

DURAND — Bart Harris’ newly remodeled State Farm Insurance office offers customers a walk downtown and it’s just what he and his wife were envisioning when they undertook the project.

The office, 209 N. Saginaw St., formerly was an auto parts store and a restaurant before Harris purchased it last year.

“When I purchased it the building was completely empty, it just had a little office and a bathroom. We wanted to come in and do something unique with the space. My wife Jody is the one that designed the inside of the office so it would look like you were walking through the streets of downtown,” he said.

When a customer first opens the door, it’s like staring down the main drag. There is a long hallway and both sides of the “street” hold offices that are designed to look like buildings.

In the redesign, the couple included different items and remnants from other buildings in Durand.

Lining the ceiling are industrial lights that came out of Tucker’s Body Shop.

“They were just sitting up on the paint booth from when they changed the lights years ago. I spent a whole weekend cleaning up 16 of them,” Harris said.

Some of the walls in the office are lined with wood from a barn that was torn down on New Lothrop Road.

“We had a client who was tearing down their barn in town and they wanted us to come take some of the wood and use it,” Harris said.

Ed and Sue Hathrill, the owners of the BP gas station across the street from Harris’ office, gave him an old weather vane that sits prominently in front of the office.

Harris said he hopes to start a trend in Durand with business owners investing in their buildings.

“To show you the belief we have in this town, my second oldest son just bought the building right next to mine,” Harris said.

Harris said the plans for the building are still up in the air.

“You never know with DJ. The last thing we discussed was a high-end Mexican restaurant,” Harris said.

Harris has operated a State Farm in Durand for about 10 years and he didn’t have to move far to the new site; his former office was just down the street. He’s been with State Farm for 43 years.

He and Jody have been married for 25 years and she works at the office with him.

And even Harris’s 4-year-old goldendoodle, Baxter, accompanies the couple to the office most days.

“If somebody comes in the door and their ailing, not feeling well or maybe they’re using a walker he’s incredible with them. The kids love him,” Bart Harris said.