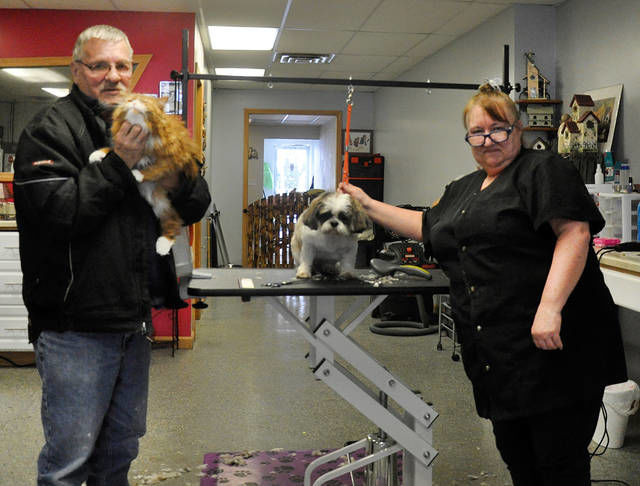 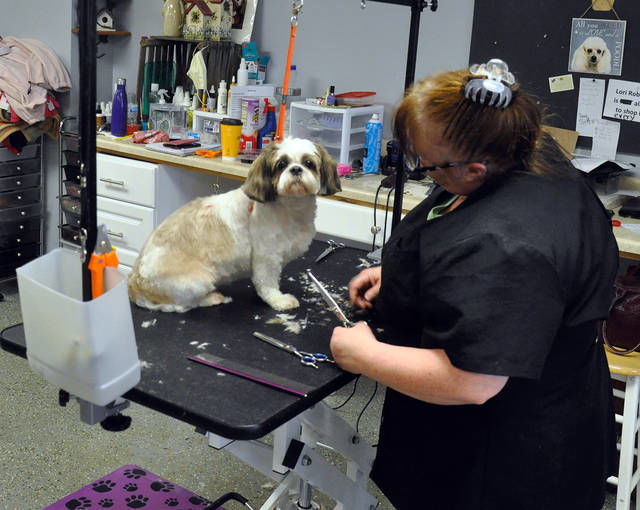 PERRY — Lori Loves Pets, a pet grooming business in Perry focuses on making pet grooming as easy as possible for pets — and their owners.

Lori Robertson and Bob Jordan, a couple who live in Perry operate the business at 122 S. Main St.

Robertson has been grooming pets for more than 25 years. In the past, she worked for other grooming businesses and, for a long time, ran a business out of her home.

As her clientele grew, Robertson said it was always her dream to have a storefront location.

That dream became a reality when the former owner of Pink Shears Pet Spa in Perry contacted her and Jordan in the summer of 2019 and informed them she planned to close. She wanted to know if they were interested in leasing the space for their own business.

The two pounced on the idea and Lori Loves Pets officially opened for business July 17, 2019.

When the two acquired the building, however, it came with a permanent tenant. Stacy, an orange tabby, lived in Pink Shears Pet Spa and continues to reside at the current business.

“At the end of the day we all work for Stacy,” Jordan joked.

The couple agree business has been doing really well since they opened. It is the only pet groomer with a storefront location in Perry.

“It’s a great pet groomer and a wonderful addition to the community,” Perry Mayor James Huguelet said, noting his wife took her dog to Lori Loves Pets to have it groomed.

Robertson said her favorite part about grooming is being able to help animals.

“When a dog really comes here in bad shape and they’re all matted, it’s nice when you can take care of that for them. You see how happy they are after you help them and it makes your day,” Robertson said.

She also recalled an incident in which a cat’s nail had grown into its paw and a vet wanted to charge one of her clients $200 to take care of it.

She said she took care of the problem and only charged the person $10.

Robertson and Jordan said one big thing they focus on is making sure the animals that come in — and their owners — are comfortable. That’s why they allow pet owners to accompany the animals while they are being groomed.

“A lot of times when your trimming a dog’s nails, it’s much better to have the owner there comforting them.” Jordan said.

One unique thing about the groomer is that they do not use crates at all during the process to hold animals. Robertson said she prefers not to use them because it raises the anxiety level of the animals, which can already be pretty high.

For $10 people can bring in their pet of any kind be it a cat, dog or rabbit and wash it in the back of Lori Loves Pets using custom tubs and shampoo included in the cost.

Lori Loves Pets is open from 8 a.m. to 6 p.m. Monday through Friday and from 9 a.m. to 4 p.m. Saturday. They are closed the first and third Tuesday of every month for in-home appointments.