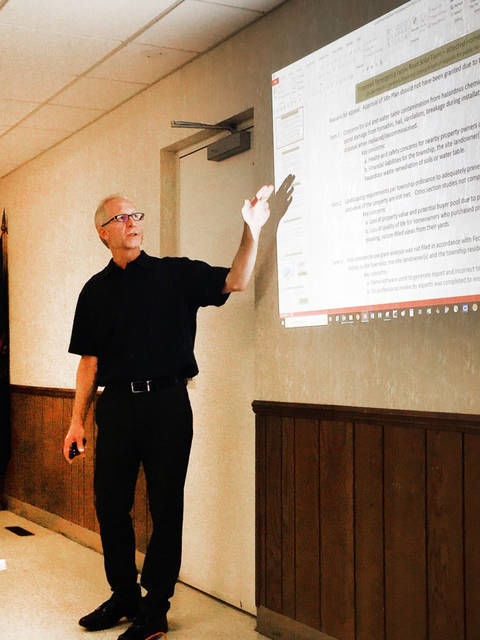 Eric Weber, a resident of the Crestview Heights subdivision, presents an appeal on behalf of his fellow neighbors regarding the proposed solar farm along Lyons Road Wednesday. 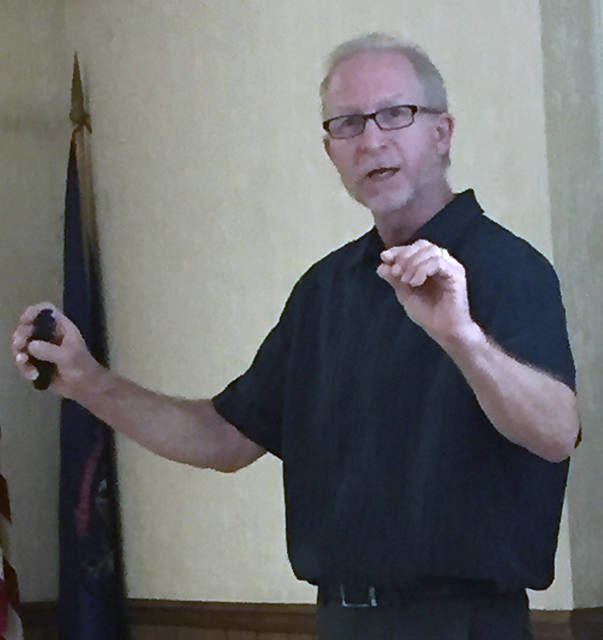 Approximately 50 area residents filled the Caledonia Township Hall Wednesday for the Zoning Board of Appeals meeting regarding the Lyons Road Solar Farm. 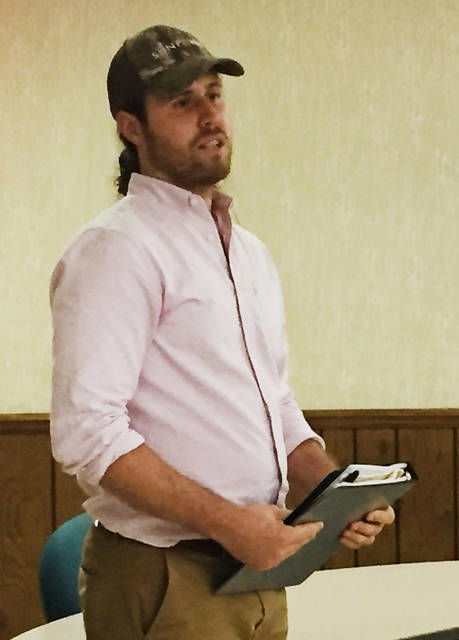 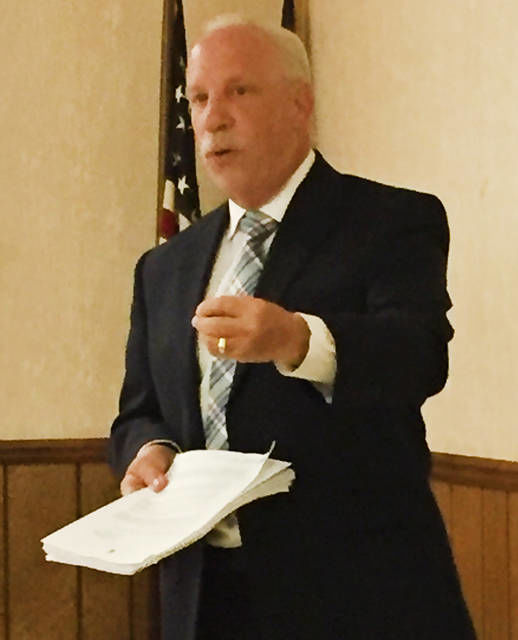 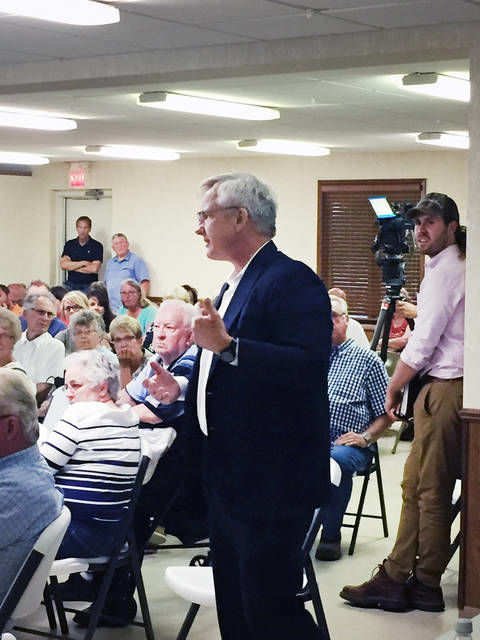 Eric Weber, a resident of the Crestview Heights subdivision, presents an appeal on behalf of his fellow neighbors regarding the proposed solar farm along Lyons Road Wednesday.

Approximately 50 area residents filled the Caledonia Township Hall Wednesday for the Zoning Board of Appeals meeting regarding the Lyons Road Solar Farm.

CALEDONIA TWP. — After three hours of discussion and back-and-forth between supporters and critics of a 200-plus-acre solar project, the Caledonia Township Zoning Board of Appeals made just one decision regarding residents’ appeal of the $30-million Lyons Road Solar Project — to table their decision until their next meeting at 7 p.m. Aug. 7.

“We could have made some decisions tonight, but I don’t want to second guess the Planning Commission,” Zoning Board of Appeals Vice Chairman Bill Yocum said. “I’m sure they had a lot of serious deliberations over this, and it’s not uncommon to have conflicts between agricultural land use and urban or suburban land use.

“I’d like to see the planning commission, the zoning board of appeals, the drain commissioner and maybe the township board get together and talk about some of these things. It’s very complicated — there’s some defects in all of the arguments that have been made. I’d like to try and figure out how to do it better,” he said.

A key reason the board tabled its decision had to do with residents who said they had received no notification about Wednesday’s meeting; others stated they only received word at the last minute.

Township Zoning Administrator Doug Piggott admitted there was some confusion regarding a meeting date.

“The initial notice that was mailed to all the properties within 300 feet had the wrong date, it had tomorrow’s date (July 11) on it,” Piggott said. “Once we found out about the mistake, a new notice was sent out, but the new notice did not meet the 15 day minimum notice requirement under the Michigan Zoning Enabling Act. In consultation with the township attorney, Peter Goodstein, it was his recommendation that the ZBA postpone action and re-notify residents of a meeting in August, to provide additional opportunity.”

The $30-million Lyons Road Solar Project is expected to produce 26.8 megawatts of electricity if built, which could power up to 26,000 homes. Lake Mary, Florida-based Renergetica hopes to build the project on property leased from two different landowners. The property extends from Cornell Road south to Lyons Road.

Justin Vandenbroeck, vice president of development at Renergetica, said the solar project is expected to create 150 to 200 temporary construction jobs and take between six and 12 months to complete.

He also said the solar project will generate more than $300,000 annually in property tax revenue, and operate for at least 35 years.

The proposed project will be split between two adjoining parcels that send power into the same Consumers Energy substation along Cornell Road.

The first parcel, starting near the corner of Cornell Road and Ridgeview Drive, is 20 acres and could hold 8,064 solar panels. It will generate 2.8 megawatts of electricity at peak performance.

The second adjacent parcel, to the south and reaching Lyons Road, is expected to be 210 acres and include 72,000 solar panels. The site will generate 24 megawatts at peak performance.

Renergetica received both its special use permit and site plan approval May 2, from the township planning commission. The project was expected to go before the township board, but Weber and his neighbors chipped in to cover the $600 non-refundable administrative fee for an appeal of the approval of the site plan.

During Wednesday’s meeting, Weber gave a 50-minute presentation detailing the residents’ appeal and their concerns around the current site plan.

Five main items were outlined during the appeal, including concerns over potential contamination at the site, the lack of an adequate visual barrier for homeowners along with perceived flaws in Renergetica’s decommissioning plan.

“We’re requesting that a plan be added to the site plan so that there’s something in there that at least prepares us in the event of an accident, because that way if there is an accident, we know how to react and how to mitigate the negative effects to the landowners as far as contaminating the soil, contaminating the water table,” Weber said.

“Ideally, we’d like the site to go to some other place that won’t affect residents, but we realize that it may not be a possibility, so we want to try to work within the situation and consider the needs and rights of Renergetica as well.”

Weber also pointed to the fact the deciduous trees outlined as part of the visual barrier are not adequate because most of the vegetation grows at the top of the tree, leaving gaps where the “industrial looking site” would remain visible.

Vandenbroeck said he is open to negotiations regarding the visual barrier, including potentially replacing the deciduous trees with evergreen trees, though he admits Renergetica has already made a fair number of concessions.

“According to Caledonia Township’s Land Development Code, solar farms are required to have a 50-foot setback from nearby property lines. That being said, in March, when we held a community meeting for residents to attend, we took into consideration public feedback, and for every property boundary that abuts to a resident or road, we voluntarily doubled the setback to 100 feet,” Vandenbroeck said.

“In addition to the setback, we have voluntarily increased the vegetative buffering, doubling the evergreen bushes around residential properties and incorporating them alongside the roadways. Ultimately, we will be voluntarily planting 1,129 native evergreen bushes around the project site, which based on quotes from Shiawassee County landscaping companies, will result in approximately $108,500 in added costs to the project.”

During the public comment portion of Wednesday’s meeting, approximately 20 people spoke, none in full support of the proposed solar farm.

Brian True, who lives along Ridgeview Drive, said he is a proponent of solar energy, but he still has concerns about the Lyons Road site.

“I hope that ultimately the solar farm is built in a way that takes into consideration local homeowners, and I think, not only just in our community, but statewide, there is a lack of attention, a lack of appreciation for the cost of decommissioning these, which may cause issues for us in 30-plus years,” True said.

According to Vandenbroeck, the cost of decommissioning the solar farm would be about $300,000.

Weber and others expressed concerns that $300,000 would not be nearly enough to decommission the solar farm, which would put the additional costs on the township.

“That’s a problem. We can’t be left holding a bag,” Weber said.

Renergetica’s legal counsel, Kirby Albright, said the company will be held accountable by more than just the township.

“This company has a written lease with the landowner, so in addition to the township’s requirements, it has an obligation under its lease to return the property at the end of its lease in a condition similar to what it was when they took it,” Albright said. “There are controls, levels, items in place, rules in place that will ensure that at the end of the line, to use Mr. Weber’s words, the township will not be holding the bag.”

Zoning Board of Appeals board member Josh Dewley said he was happy to see a large number of residents show up for the meeting.

“I want to thank all of you for coming out,” Dewley said. “Whatever happens at the end, I appreciate everybody taking the time.”

CALEDONIA TWP. — The Caledonia Township Zoning Board of Appeals (ZBA) agreed once again Wednesday night to table a decision on a proposed 200-…

CALEDONIA TWP. — After an appeal process that spanned nearly six months, the $30-million Lyons Road Solar Project may be ready to move forward.