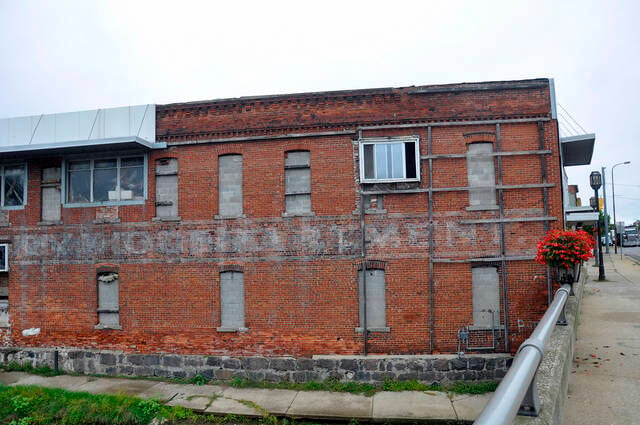 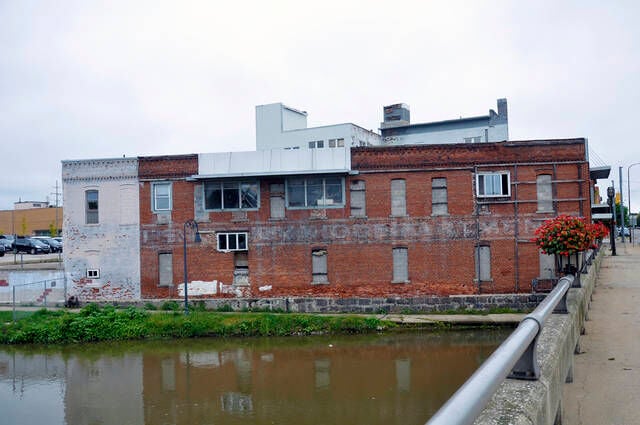 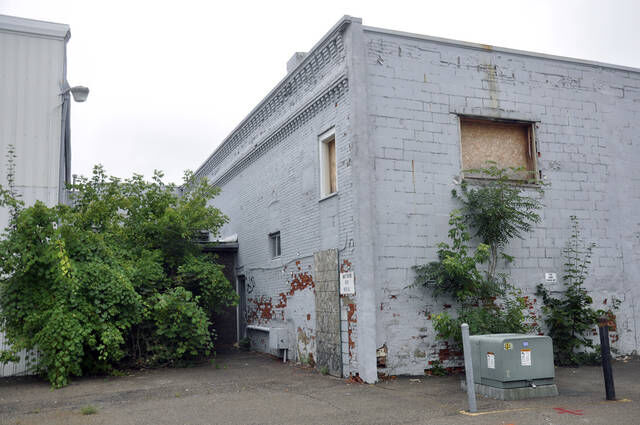 A section of the Matthews Building is shown 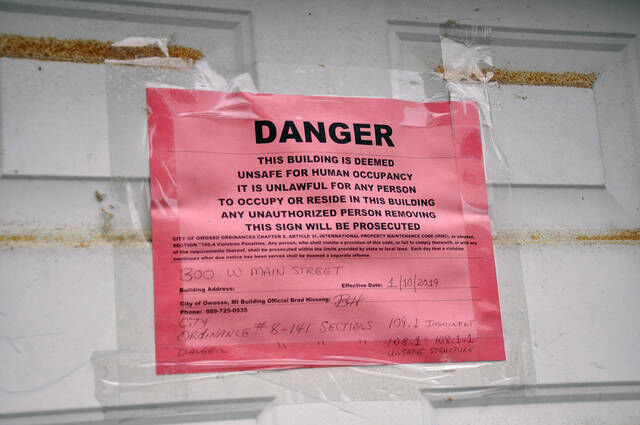 A sign warns passersby of the condemned Matthews Building in Owosso. 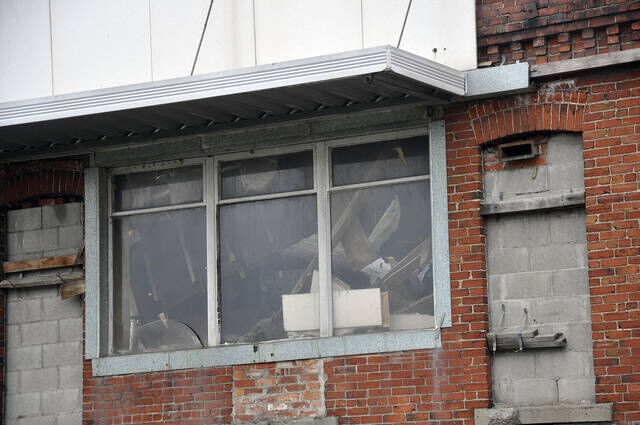 The collapsed roof of the Matthews Building is seen from this photo taken from the M-21 bridge in Owosso. 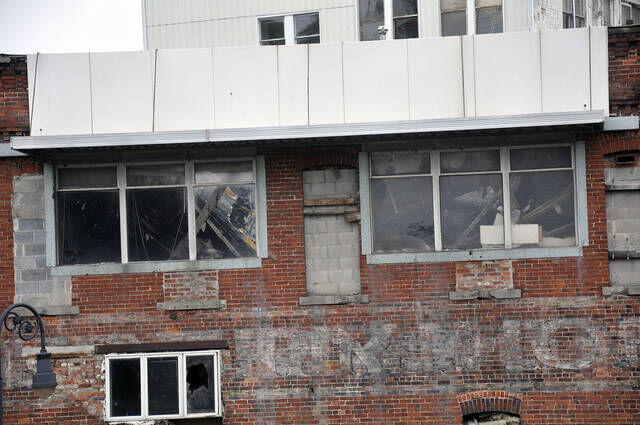 A section of the Matthews Building is shown.

A section of the Matthews Building is shown

A sign warns passersby of the condemned Matthews Building in Owosso.

The collapsed roof of the Matthews Building is seen from this photo taken from the M-21 bridge in Owosso.

A section of the Matthews Building is shown.

OWOSSO — The most decrepit section of the Matthews Building, at 300 W. Main St. in downtown Owosso, could soon come down.

After months of back-and-forth between city officials and the owner about fixing the dangerous condition of one of the building’s three sections — namely, the structure fronting the Shiawassee River — the owner’s developer has applied to the city to demolish it.

“It’s time,” Owosso City Manager Nathan Henne said Thursday. “I’m looking forward to getting this done and behind us.”

Finally, the Commission’s recommendation will be considered by the Owosso City Council, which has the final vote on the application. Henne said the owner, businessman Nemer Haddad from southeastern Michigan, has indicated he would like to begin the tear-down Sept. 15. But the process could take longer, Henne said.

“I don’t think Sept. 15 is realistic,” he said. “My intention is to have the problem abated before the end of the year.”

Haddad did not return a call by The Argus-Press Thursday requesting comment.

The planned demolition is part of a settlement agreement the parties are working on, the other terms of which have not been released, Henne said.

The settlement could also cover multiple outstanding code enforcement violations regarding the building’s condition. Tickets were issued to Haddad over a period of months with no action on his part, leading to the city filing an action in 66th District Court in Corunna.

The riverfront section of the condemned Matthews Building has a collapsed roof and other deficiencies so serious city officials closed part of a walking trail next to the building, citing an expressed concern about endangering the public.

Henne said city officials recently informed Haddad that he would have to abate the nuisance. Haddad asked for his options, which were to repair the building, install a new roof or demolish the riverfront section. He apparently chose demolition.

That was a different choice than the one the businessman seemed to be leaning toward at a council meeting July 21, when his representative, consultant John Hambrick, told council members emergency repairs would start “next week.”

Hambrick said his client had not proceeded with repairs because they would interfere with his ability to obtain government funding for his planned building renovation.

The certificate not only serves as the foundation for Haddad’s plan to apply for government funding, it also entitles him to a tax abatement totaling $561,133 over a period of 12 years.

Haddad’s development plan — the same as the one put forth earlier by the previous Matthews Building owner, real estate broker Randy Woodworth — is to transform the 31,000-square-foot facility into retail, commercial and office space, and 17 upper-floor apartments, at an estimated cost of $8 million.

Hambrick said July 21 the project will create 25-40 temporary construction jobs and a potential of 70 jobs when the renovation is complete and occupied by tenants. However, the three prospective tenants lined up so far are restaurants that might drop out because of COVID-19 restrictions, he suggested.

Hambrick said if some building sections are torn down but not rebuilt, the original project will be scaled back to some extent. He said he doesn’t believe demolition of part of the structure will adversely impact Haddad’s government financing deal.

The Matthews Building, which has sat vacant since 2015, has long been targeted for redevelopment. When Haddad purchased it last year, he planned to install a marijuana retail store but then found out his state-financing deal was off because a marijuana-related business was involved.

In July, Haddad opened Oz Cannabis, the first recreational marijuana dispensary in Ypsilanti, according to a news report.

Last October, Owosso officials entered into an agreement with Haddad in which he promised to either rehabilitate or demolish the building within 36 months. Under the agreement, Haddad guaranteed one of three outcomes:

n Rehabilitate the Matthews Building in partnership with the city, Michigan Economic Development Corporation by resurrecting plans for a “capital stack” of financing that included previously awarded city abatements, MEDC grant dollars and private investment; or

n If the capital stack doesn’t work out, bring the building up to code by making necessary repairs; or

n If the capital stack doesn’t work out, demolish the building in accordance with the city’s building code.

The parties also agreed the building would continue to be subject to code enforcement. In return, the city agreed to allow the new owner to relocate his planned marijuana provisioning center to a different building, within local zoning regulations.

The structure has been either empty or underutilized for decades. About five years ago, local developer Randy Woodworth and partners purchased the Matthews Building with a plan to renovate the space into 20 or so high-end apartments, and office and retail space. The section of the building that abuts the river, formerly a brewery, was to have been redeveloped into a brew pub.

In January 2019, Woodworth announced a downsized plan to develop the building section along the river into a restaurant, saying the cost to rehab the building was significantly more than the grant dollars lined up, making the project financially unfeasible. Before moving forward with the new plan, Woodworth sold the structure to Haddad.