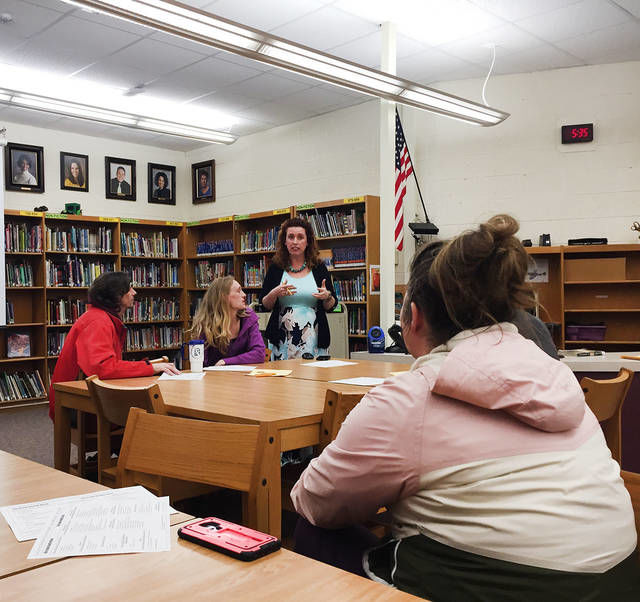 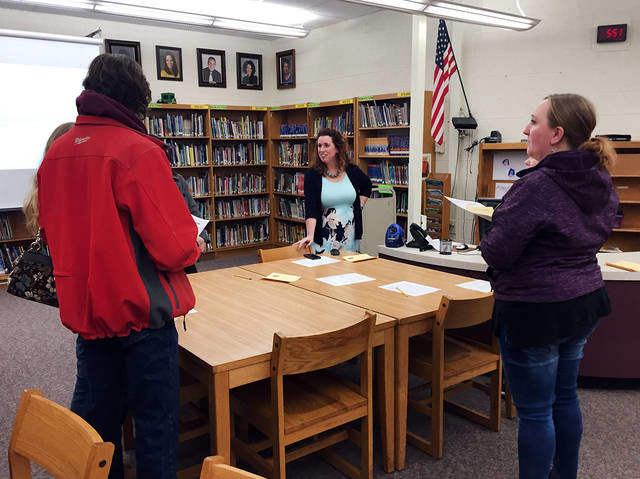 CORUNNA — Officials at Corunna Public Schools are updating the district’s current reproductive health and wellness curriculum, proposing a transition from the current “abstinence-only” model toward an “abstinence-based” format, which would provide students with information about pregnancy prevention and sexually-transmitted disease prevention, among other topics.

The shift would allow for additional attention on socio-emotional health, according to Curriculum Director Jamie Johnston, including discussions on how to deal with conflict.

“It’s just about making sure that kids can have the skill set to be ready to become adults,” Johnston said, “that, you know, no matter what the stressor is, no matter what it is, they have those coping skills to handle that.”

The proposed change and its perceived benefits were disclosed to parents via two informal parent meetings March 3 and 4 inside the Corunna Middle School media center.

Johnston will recommend the updated curriculum to the Corunna Public Schools Board of Education during its next regular meeting, set for 7 p.m. March 23 inside the high school media center. If approved, the changes would go into effect for the 2020-21 academic year.

“We would like our children to wait to have sex until marriage, but the reality is, if they decide to go a different route, we want to make sure that we’re arming our kids with that knowledge,” Johnston said. “The big difference (with the abstinence-based curriculum) is being able to talk. When kids are asking questions regarding sexually-related topics, teachers (would be) able to give them answers about that instead of saying, ‘You need to remain abstinent until marriage.’”

According to state law, school districts are only legally required to provide information to students regarding HIV/AIDS, which must be offered at least once a year at every building level (elementary, middle, high).

Instruction on sex education, however, is not legally required by the state, but rather is left up to each individual district to choose and implement. Parents may opt their children out of the curriculum.

In August 2019, Johnston sent out a survey to all parents in the district seeking input regarding the district’s current health and wellness curriculum. The survey drew 241 responses, she said, with the majority of parents requesting more information be taught about puberty/adolescence, relationships, communication, sexual abuse/assault and sexually-transmitted diseases.

With both sets of data in hand, Johnston and a committee of students, staff and parents set to work on drafting an updated health and wellness curriculum, reaching a collective decision in December to recommend a more “abstinence-based” curriculum m, which encourages abstinence as the safest choice, but also encourages young people who are having sex to always use forms of contraception.

Under the proposed curriculum, fourth grade students would receive a week of health and wellness instruction, with lessons on nutrition and physical activity; alcohol, tobacco and other drugs; safety planning (fire, tornado, weapons, etc.); personal growth and development (puberty/reproductive system); and personal health and wellness/HIV.

Johnston noted that during the personal growth and development lessons, fourth-grade students would be divided into separate groups by gender.

Health and wellness courses would also be required in sixth and eighth grade under the proposed curriculum, according to Johnston, along with an additional required health class in high school; topics would include social and emotional health, human sexuality/reproductive health and nutrition and physical activity.

Jamie Parker, a paraprofessional at Elsa Meyer Elementary with two children in the district, was among about 10 parents attending March 3’s informal meeting, and expressed support for the proposed curriculum changes.

“I really love this idea…I think it’s what kids need now,” Parker said. “I am really happy that the district is (considering) moving in a different direction, I mean, that basic abstinence-only isn’t working for this next generation coming up…I love that the district is willing to look beyond that and I love that they sent out the surveys to the parents to receive community involvement.”

Overall, Johnston said the conversations with parents have been productive.

WHAT? Abstinence based education? In this day and age? SMH. Better to be prepared, armed with knowledge about contraceptives, and how to obtain contraceptives than to be uneducated, uninformed, and pregnant. All the hopes/wishes that children/teens remain celibate are okay but it is not reality. SMH.