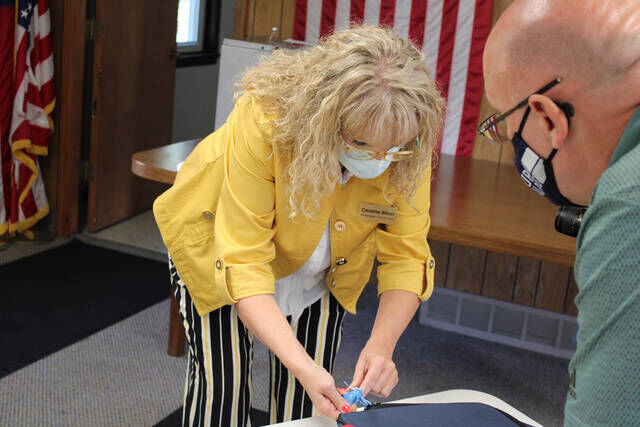 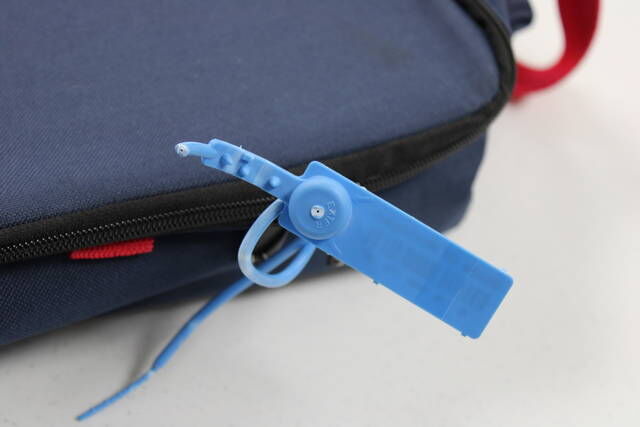 A broken seal, meant to secure the in-person ballots from Vernon Township Precinct 2, is shown. A recount of Durand Areas Schools' 30-year, $28-million bond proposal could not be completed Wednesday due to the broken seal.

A broken seal, meant to secure the in-person ballots from Vernon Township Precinct 2, is shown. A recount of Durand Areas Schools' 30-year, $28-million bond proposal could not be completed Wednesday due to the broken seal.

DURAND — A recount of the Aug. 4 election result for Durand Area Schools’ main bond proposal was abruptly halted Wednesday after the Shiawassee County Board of Canvassers discovered the seal on the Vernon Township Precinct 2 ballot box was broken — upholding, at least for now, the initial election result.

Citing Michigan Election Law, the Board of Canvassers determined in-person ballots for Vernon Township Precinct 2 were not eligible for a recount because of the broken seal, and the original election result for the precinct — in which the proposal passed by 26 votes Aug. 4, 156-130 — was upheld.

A full report of the board’s findings has been submitted to the Genesee County Prosecutor’s Office, the Michigan Attorney General’s Office and the Ingham County Chief Circuit Court Judge for further review and investigation.

“While the Shiawassee Board of Canvassers does not believe there was fraud, wrongdoing, or a violation of the law, it is believed that a human error was made,” the board stated in its report Wednesday.

The recount was spurred by Gaines Township resident Axel Bowden’s petition, filed Aug. 17, which cited potential errors that enabled residents from outside the school district to vote for the proposals by absentee ballot.

The Durand Area School district spans parts of both Shiawassee and Genesee counties. Bowden requested a recount of the results only for Vernon Township Precinct 2, where the measure passed 156-130 on election day, because he claimed “as little as five and as many as 50 electors received and voted absentee with the wrong ballot.”

The recount began shortly before 11 a.m. Wednesday inside the Vernon Township Hall, with the Shiawassee County Board of Canvassers opting to recount the absentee ballots first, prior to counting in-person ballots. Bowden was not present for the proceedings.

Upon completion of the absentee recount, the board took an hour-long recess, returning about 1:30 p.m. It was then that the board discovered the broken seal on the in-person ballot box for Precinct 2, rendering the ballots ineligible for a recount.

Vernon Township Clerk Charlotte Clarke said she believed the broken seal was the result of human error by an election worker. Shiawassee County Clerk Caroline Wilson questioned whether or not the seal may have been damaged when it was transferred from Precinct 2 to Precinct 1 for the recount.

“It’s definitely going to be a topic of conversation because did it break here? Did it break during travel? Did it break because something hit it and it snapped it?” Wilson said following Wednesday’s proceedings. “I have never in my four years, in my audit findings and what have you, I’ve never seen the seal of a ballot box broken … I don’t know how that could’ve snapped like that.”

The board confirmed Wednesday that Clarke incorrectly mailed at least one Durand Area Schools absentee ballot to a Corunna Public Schools voter, though the board has reason to believe more than one area resident received an incorrect absentee ballot.

As the Board of Canvassers drafted its formal report of the recount findings, members discovered that out of the 166 absentee ballots filed in Precinct 2, only 158 electors should have been eligible to vote on the Durand Area Schools bond proposal.

Furthermore, 12 undervotes — in which the Durand schools bond proposal was left blank on the absentee ballot — were cast in Precinct 2. Board members said they have no way of knowing if the 12 undervotes were eligible to vote on the Durand proposal.

For in-person voting, 142 votes were recorded, though only 141 electors should have been eligible to vote on the Durand proposal, according to the board’s report. Those votes, however, were not recounted because of the broken seal.

Durand Area Schools Superintendent Craig McCrumb, who was in attendance at Wednesday’s recount — a nearly four-hour affair — said he was at a loss for words.

“I don’t even know how to explain it,” McCrumb said after a long pause. “It’s somewhat incredulous to be standing here still not knowing. We’ve got all these families and kids counting on this and hoping like crazy that things will come out the way that they’re hoping.

“We just want to know what’s real, how the vote landed,” McCrumb continued. “We want integrity in the election, we want accuracy all the way across the board and it’s relatively frustrating to have this continue to be kicked down the road because of these errors that have been made. It’s just disheartening given the amount of time and energy that has gone into this proposal.”

If the election results stand following any subsequent investigation, the Durand school bond — developed by a citizens committee — will fund the addition of an auxiliary gym, a 599-seat auditorium, and a three-classroom addition to Robert Kerr Elementary, as well as district-wide upgrades and repairs.

Upgrades under the Durand bond initiative include: