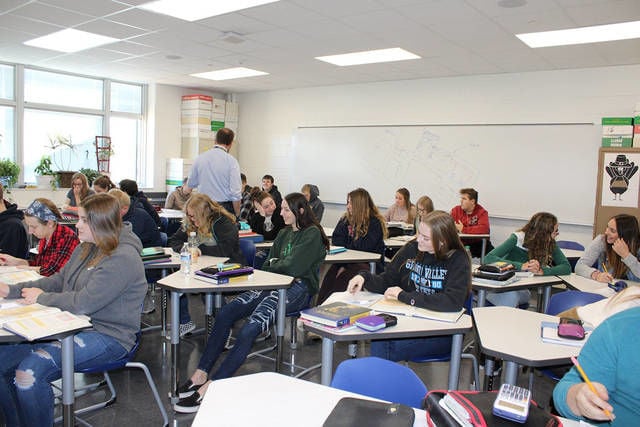 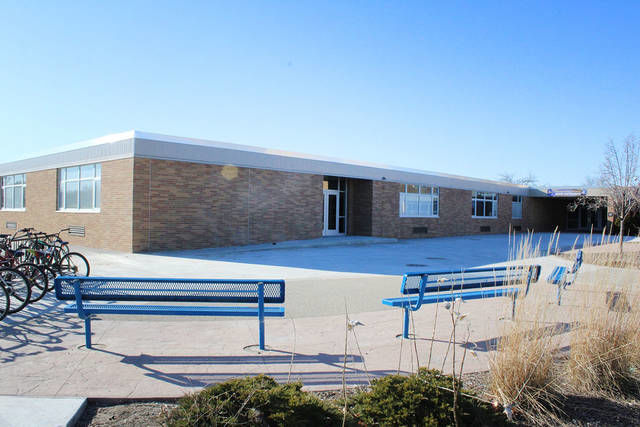 Construction at Owosso High School is ongoing. A portion of the new work is shown here as part of the district’s $45.5-million bond project.

Construction at Owosso High School is ongoing. A portion of the new work is shown here as part of the district’s $45.5-million bond project.

OWOSSO — Owosso High School students and staff are getting their first chance to enjoy renovations stemming from a 2017 bond, as school officials recently unveiled a section of classrooms following winter break.

The new wing features approximately 17 classrooms, according to High School Principal Jeff Phillips, each with new desks and chairs.

The new portion serves as the home for the high school’s career center and includes all of the junior lockers, which students began using upon their return Jan. 6.

Teachers began their transition into the classrooms a few days earlier, on Jan. 2, to help accommodate ongoing construction in other portions of the building.

“It’s been a great team effort to do all of this, to work through this (transition),” Phillips said. “Everybody’s excited, and when the whole thing is done, this whole campus is going to be really cool.”

The upgrades at the high school stem from a $45.5-million bond approved by district voters in November 2017.

The approved bond covers the cost of the building construction and renovations to combine grades 6-12 at the high school campus, while maintaining separation between middle school and high school students.

The measure includes funding for an updated Career and Technical Education (CTE) space, a new gymnasium for middle school students and a multi-purpose education space capable of seating 1,000 people, serving as both an auditorium and a classroom, which will be located at the front of the building off North Street.

Upgrades at Bryant Elementary, Central Elementary and Emerson Elementary were included in the bond, as each received an approximately 5,200 square-foot addition to accomodate cafeterias, kitchens, and space for Science, Technology, Engineering, Art and Mathematics (STEAM) programs.

The elementary improvements were unveiled in August, with ribbon-cutting ceremonies at each building.

Work at the high school campus — soon to be the 6-12 campus — is ongoing, albeit ahead of schedule, according to Superintendent Andrea Tuttle, thanks to favorable weather conditions.

“We’re doing really well right now because the winter has been pretty mild,” Tuttle said. “We’re on the scheduled pace to have everything completed, aside from the inside of the new auditorium, by the start of the next school year, so our hope is to have all of our sixth through eighth grade students start the school year next year in that building, which is actually ahead of schedule because initially we thought it was going to be in December 2020. If there are no unforeseen circumstances, everything should be completed by the fall.”

The new middle school gym, which will have space for two practice courts and one competition-sized court, will likely be completed by the end of March, according to Tuttle, though the space won’t be used until the end of the school year.

The high school’s concert band, which rehearses in what will eventually be the new fitness center, will relocate to the new middle school gym upon its completion to accommodate continued work on the fitness center.

“It’s very much a domino effect, lots of movements right now trying to expedite the process because we did fall a little bit behind initially due to the freezing cold temperatures last winter,” Tuttle said, “which kept them (crews) from working outside, and then this (past) spring did not start off well (either) with a lot of rain.”

Owosso Public Schools Director of Operations John Klapko said there’s a small chance four or five classrooms may have to relocate before the end of the school year to help expedite construction, though the bulk of the remaining work — an estimated $25-million worth — will be completed this summer.

That work will include replacing all of the building’s interior doors, tearing out and replacing existing lockers, renovating additional classrooms, installing technology throughout the building, completing the fitness center and wrapping up work on the performing arts center, which will feature all of the middle school and high school fine arts classrooms (band, choir, art) as well as the auditorium.

For the second year in a row, the district won’t welcome back its students until after Labor Day, according to Tuttle, to allow more time for construction crews to finish interior work. The first day of school for Owosso Public Schools will be Sept. 8.

Klapko said he’s been very appreciative of the work done by Clark Construction Company, of Lansing.

“(Clark Construction and our maintenance staff) work together, and it’s almost like we’ve been working together for a long time,” Klapko said. “Both groups want to get this work done, so we’re all on the same page. It’s been great to watch.”

For Tuttle, the district improvements have been a long time coming.

“It’s been about a decade working on this bond, and to see it finally come to fruition, I’m so happy for our kids, I’m happy for our community,” Tuttle said. “We have always had modern day curriculum, modern day offerings which far exceed most high schools in the state of Michigan, but our facilities haven’t necessarily matched that. Now it’s going to be modern, fresh, the newest of technologies, the latest in safety and security.

“I am grateful when I walk through these new facilities,” she continued, “I’m grateful to our community and to the people who support public education and understand the importance of educating our youth and giving them all of the tools and all of the opportunities to be successful.”