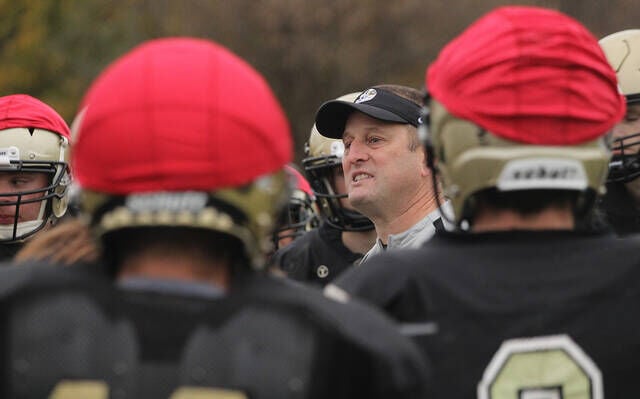 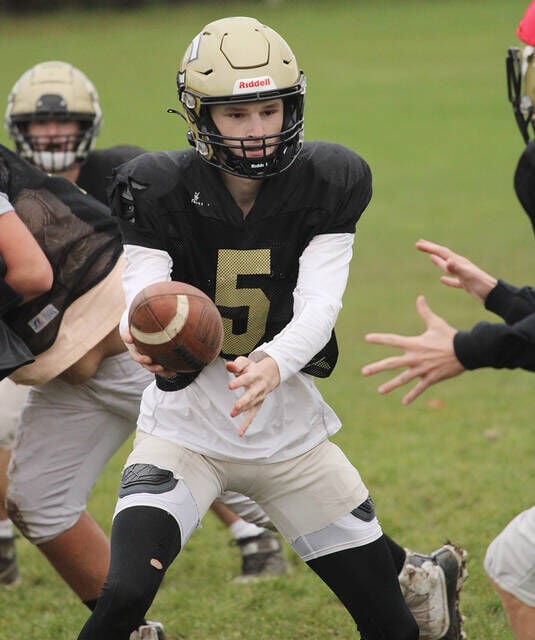 Corunna senior quarterback Jaden Herrick hands the ball off in practice Tuesday afternoon at Corunna High School. The Cavaliers (7-4) will travel to face No. 3-ranked Marine City (11-0) Friday at 7 p.m. in a Division 5 regional championship game 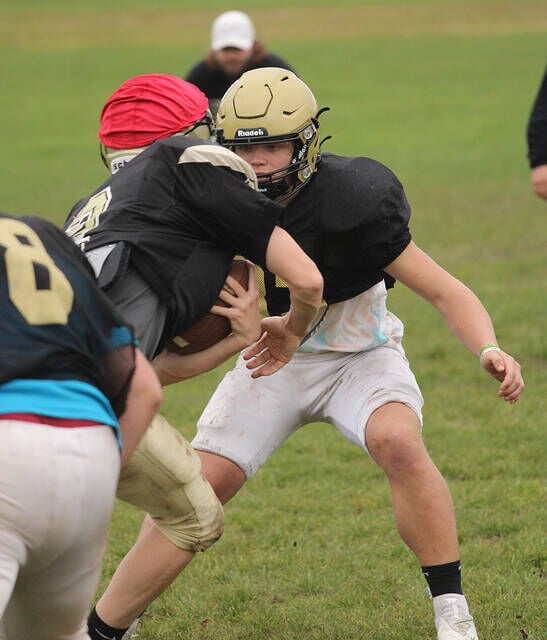 Corunna sophomore linebacker/running back Jaden Edington (facing camera) prepares to wrap up a Cavalier ball carrier in practice Tuesday at Corunna High School. Edington, Corunna’s leading tackler on the season, will lead the Cavaliers (7-4) as they face No. 3-ranked Marine City (11-0) Friday at 7 p.m. in a Division 5 regional championship game in East China Township. 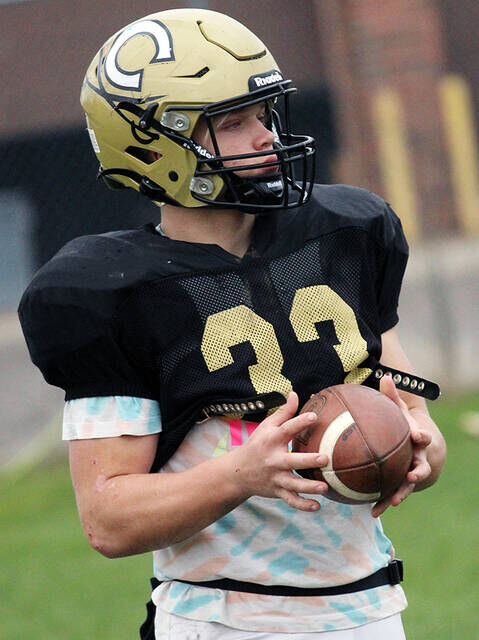 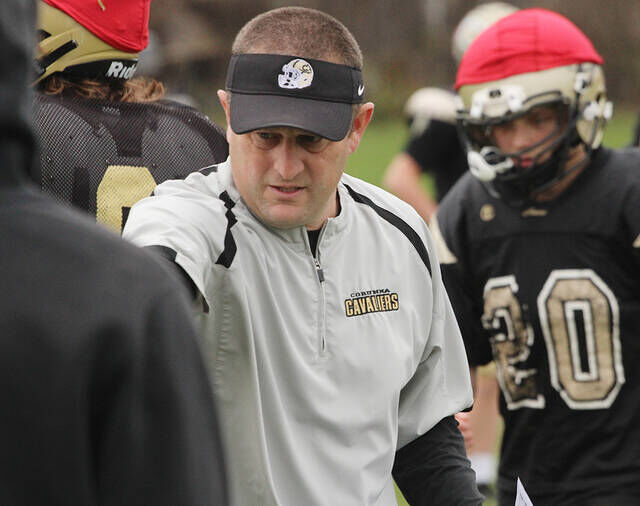 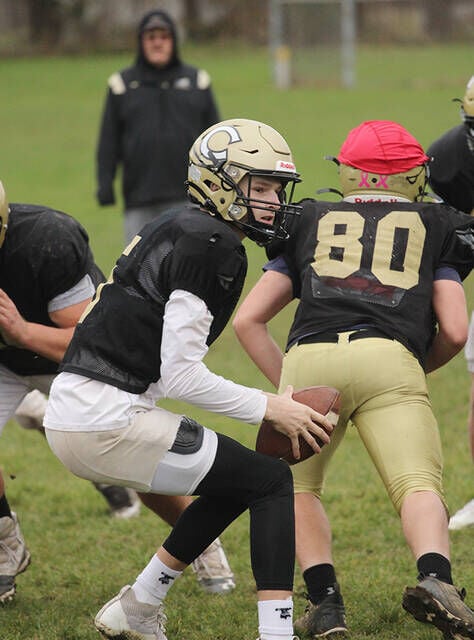 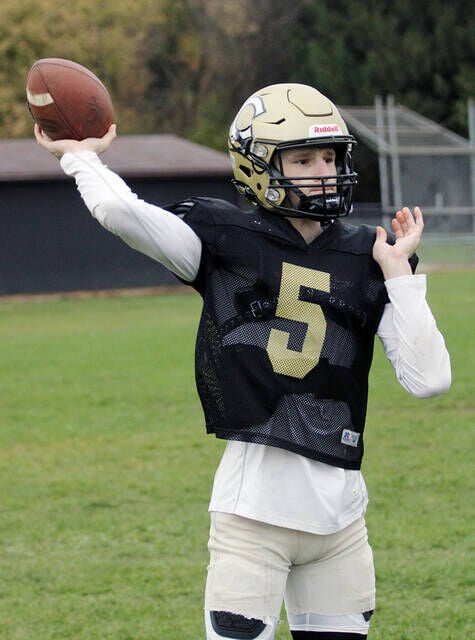 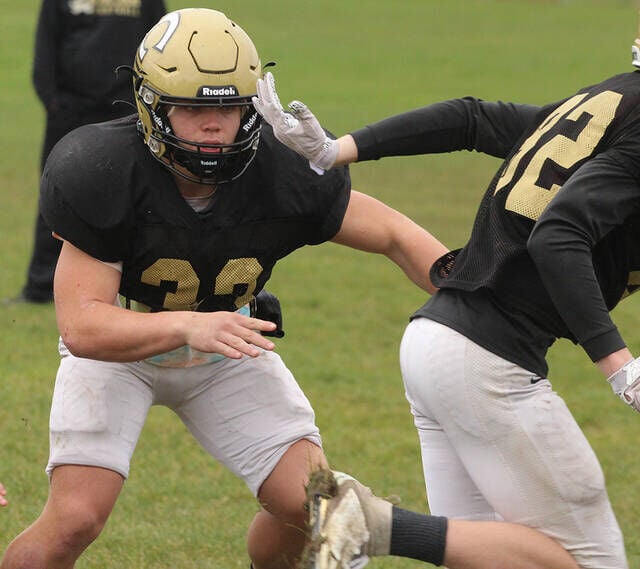 Corunna senior quarterback Jaden Herrick hands the ball off in practice Tuesday afternoon at Corunna High School. The Cavaliers (7-4) will travel to face No. 3-ranked Marine City (11-0) Friday at 7 p.m. in a Division 5 regional championship game

Corunna sophomore linebacker/running back Jaden Edington (facing camera) prepares to wrap up a Cavalier ball carrier in practice Tuesday at Corunna High School. Edington, Corunna’s leading tackler on the season, will lead the Cavaliers (7-4) as they face No. 3-ranked Marine City (11-0) Friday at 7 p.m. in a Division 5 regional championship game in East China Township.

CORUNNA — On paper, No. 3-ranked Marine City is a heavy favorite in tonight’s Division 5 regional championship.

Corunna (7-4) will attempt to play the role of giant killer when it collides with the Mariners (11-0) at East China District Stadium, the home turf field stadium for Marine City and neighboring St. Clair in East China Township.

The biggest problem the Cavaliers face is Marine City’s high-octane offense, which has scored 520 points this season — a whopping 47.3 per contest. The Mariners have given up 97 points this season, or 8.8 per game.

“They go two-box, they’ll go shotgun, they’ll run straight T and they do a lot of different things,” Corunna coach Steve Herrick said. “You’ve seen the scores. Their closest game was 21-10. They are a good football team. But we’re a good football team, too, and we’ve gotten better as the year has gone along. We’re excited by the challenge and the opportunity.”

Marine City junior quarterback Jeffery Heaslip has completed 72 of 128 passes for 1,297 yards with 15 TDs and four interceptions. Heaslip has also run for 482 yards and 10 TDs. The Mariners’ leading ground gainer is Zachary Tetler, a 5-9, 165-pound junior. Speedy and shifty, Tetler has rushed for 1,134 yards and 25 TDs — averaging 12.2 yards per carry. Senior Charles Tigert, at 5-foot-8 and 185, brings more power, but is also fast, rushing for 770 yards and seven TDs.

Marine City has four receivers who have more than 200 receiving yards this season. Parker Atkinson has 15 catches for 326 yards and four TDs. Anthony Ruffino has 18 grabs for 286 yards and three scores.

Defensively, outside linebacker Jacob Hincherick leads the Mariners with 75 tackles.

Herrick said Marine City is solid in all phases of the game, evidenced by the Mariners’ 49-6 victory over Dundee last week. Heaslip completed 11 of 18 passes fo 196 yards and three TDs, while Tetler rushed just seven times for 129 yards and two TDs.

The Mariners opened the playoffs by routing South Lake, 49-12.

Marine City’s offense has many different variations, and it often departs from a straight wing-T formation, Herrick said.

“They are very aggressive and they are well-coached and they do what they do and what they do, they do well,” Herrick said. “They run a 3-3-5 defense, which is a unique defense and you have to focus on how you are going to attack it. The blocking schemes are a little different. Offensively, they are kind of a wing-T (or) spread-T kind of a team.”

Corunna has been an opportunistic team this fall, forcing 23 turnovers while committing just nine itself.

Marine City’s stiffest challenge to this point came in Week 9, a 21-10 victory over Pontiac Notre Dame Prep (7-3). Outside that game, the Mariners have not scored less than 41 points in a game this season.

Corunna, coming off a 20-8 victory over Armada last week at Anchor Bay High School, is averaging 23.7 points per game. The Cavaliers have yielded 13.6 points a game on defense.

Corunna senior quarterback Jaden Herrick has completed 49 of 87 passes for 856 yards and 13 TDs and four interceptions. Herrick also leads the squad in rushing, running for 579 yards and seven scores on 84 carries.

Herrick’s favorite receivers have been twins Wyatt Bower (23 catches, 437 yards, five TDs) and Tarick Bower (21 catches, 369 yards, seven TDs). Right behind Herrick in rushing is running back Jaden Edington, who has rushed for 541 yards and 8 TDs on 88 carries. Colin Lavery has rushed for 379 yards and two TDs.

Edington, at inside linebacker, leads Corunna in tackles with 108 on the season. That includes 38 solo tackles, four tackles for losses and two fumble recoveries. Corunna’s Colin Thompson has registered 70 tackles. Zach Rosser has two sacks, while Wyatt Bower has four interceptions and Herrick has three.

Edington said the Cavaliers are cherishing the underdog tag.

“Nobody — everybody is expecting us to lose the game,” Edington said. “The keys are stopping the run and being confident in ourselves and going out there with a chip on our shoulders and playing our game. I take a lot of pride in our defense. Defense is a very strong element to our game right now.”

Jaden Herrick said Marine City will pose a much tougher task than Armada did last week.

“They play a lot more aggressively than Armada did,” Edington said. “We saw that on film. We just have to come out and play our game.”

The Mariners have made the playoffs 25 of the last 26 seasons. Marine City lost in the regional finals to Frankenmuth last season 31-7 — a week after Frankenmuth defeated Corunna 56-14 in the district finals.

Corunna is in the regional finals for just the fourth time in school history. The deepest the Cavaliers have gone in the playoffs came in 1996 when they reached the Class B state semifinals, losing to Jackson Lumen Christi, 42-7.

Corunna will be on the road for the third straight week. It opened the playoffs by beating Flint Powers Catholic 30-0 at Flint’s Atwood Stadium.

Corunna forced Armada to turn the ball over five times last week and will be looking to create some more havoc tonight.

“We need to get turnovers and obviously limit our own turnovers — we turned the ball over two or three times last week and, at the beginning of the game, put ourselves in a pretty bad position,” Steve Herrick said. “We just have to hold onto the football and definitely get some positive yards on first downs. We want to make sure we keep moving the sticks because they are a team that will blitz you and come after you.”