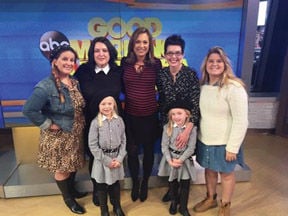 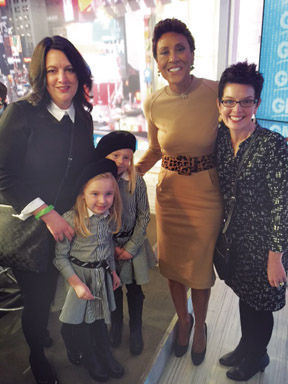 CORUNNA — Two educators from Corunna Public Schools caught the attention of ABC’s “Good Morning America” with a book they penned to inspire students to dream big.

The pair got the idea for their book after taking four of Foster’s students to Lake Michigan this past summer, Foster said Monday. Seeing the students enjoy the vacation they may not have been able to take otherwise, and the support from parents in the community, the two realized they could make a difference in many other children’s lives by helping them take trips.

After the summer trip with students, Foster and Cooper-Toma said they felt it was their responsibility to give other children the same opportunity to have those experiences.

That idea continued to evolve into other trips and the educators decided to turn their experiences into a book to share and inspire everyone, Foster and Cooper-Toma said.

“Then it blew up and became so inspirational,” Foster said.

Foster said the main message of the book is that all students should receive the same learning opportunities and experiences, something that hits close to home in the Corunna school district where the teachers see students struggling with economic challenges. More than 60 percent of the student population receives free or reduced lunches, they noted, an indicator of poverty.

The book is scheduled to be released in the spring and the educators hope to launch a program in conjunction with its release to help all children realize they are capable of big things, Foster said.

“It’s terrific to have people who want to inspire our kids,” Corunna schools Superintendent Dave Moore said. “It’s something we all need to do.”

Foster and Cooper-Toma have offered similar trips to other students in the district, and they say they will do the same for students nationwide — using their own money. The authors say they will provide the opportunity to any child referred to them by a school social worker or teacher or through any other source if they can.

“We want to impact these children,” Cooper-Toma said. “We know there are many challenges, and we want to inspire them to dream.”

The idea for the book and project all came together quickly — from brainstorming to their progress today, everything happened in the past 21⁄2 months — leaving Foster and Cooper-Toma feeling lucky and humble, they said.

“Last year was our first year together,” Cooper-Toma said. She added both bonded on their love for children, and their passion and vision for educating students.

“We were amazed at how students have challenges, but are always excited to learn,” Cooper-Toma said.

“It was all built around our love of children,” Foster said.

With the assistance of Michigan-based Krave Marketing, Foster and Cooper-Toma were invited to New York City for a private photo shoot with Michigan native Ginger Zee on the set of GMA Wednesday. The educators wanted to show students that working hard, having a dream and following through pay off.

“The message and story are very motivational,” Cooper-Toma said. “GMA was excited to hear more about it.”

The two even surprised Nellie Reed student Annamarie Dodak and her cousin Lily Kiolbasa, inviting them along on the trip to New York City, Cooper-Toma said.

“It shows a lot of great things can happen, even in a small town,” he added. “They are modeling what they aspire for our children.”

Foster said they want to help build confidence in students and make them feel special, like celebrities.

“We want to take care of them,” Foster said. “Tell them ‘you are special.’ We want to open kids’ eyes to a world of opportunities.”

Moore said Foster and Cooper-Toma are showing the students what it means to dream big.

“They are not only talking with the kids about what they should be doing, but modeling it,” he said. “If you are telling someone to dream big, you have to dream big as well.”

The two educators said they have received overwhelming support from parents, staff and administrators for what they have done. None of those supporters knew the extent of what Foster and Cooper-Toma were working on the past few months.

“Their overwhelming support and love given is so inspirational,” Foster said.

This book is only the first in what the two hope will become a series. Trips and work on a second book have already begun.

“We’ve already reached so many children,” Foster said, “and hope to reach…”

“This is just the beginning,” Foster said.