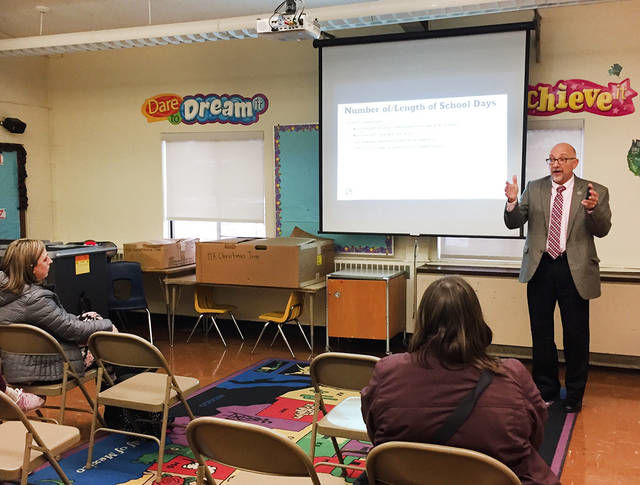 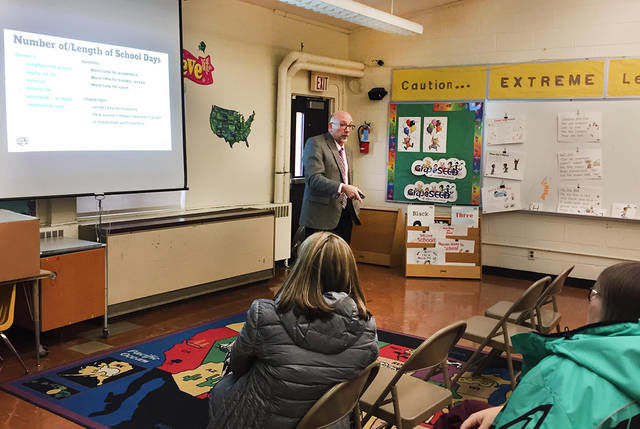 John Fattal, superintendent of Corunna Public Schools, gathers input from parents and staff regarding how to address the current challenges facing the district during a community meeting Wednesday at Nellie Reed Elementary.

John Fattal, superintendent of Corunna Public Schools, gathers input from parents and staff regarding how to address the current challenges facing the district during a community meeting Wednesday at Nellie Reed Elementary.

CORUNNA — In an effort to obtain outside perspectives regarding challenges facing Corunna Public Schools — as well as thoughts on the future of the district — Superintendent John Fattal is leading a series of community input meetings at each of the district’s school buildings.

The informal sessions kicked off Monday morning at Nellie Reed Elementary. Wednesday, Fattal returned to the school to seek additional feedback from parents and staff members.

In total, the meetings will span two weeks, with planned sessions at Louise Peacock Preschool, Elsa Meyer Elementary, the middle school and the high school.

“I want to be able to provide information about where we are, what I see as some potential challenges that we have in our district, and how we might be able to collectively figure out a way that we can attack them,” Fattal said. “I need feedback from all of you.”

During the 45-minute presentation Wednesday afternoon, Fattal discussed such things as current building and grade configurations, and the possibility of year-round schooling.

School start times, the length of school days, class schedules and the potential for late start or early release days to accommodate teachers’ professional development were also among the items addressed, as Fattal presented a number of proposed alternatives to the district’s current schedule.

Among the alternatives, Fattal unveiled multiple building alignments that featured year-round schooling for K-5 students at Nellie Reed, while maintaining a traditional academic calendar across other district buildings.

“Some of the families may like that option of a balanced calendar,” Fattal said. “It gives them more choice, and a balanced calendar still falls within the same time constraints. There’s still 180 days of school, the same Christmas break, the same spring break, but they would have a longer break — possibly around October — where they would have a week off, and they might have another week off in May.”

Lapeer Community Schools has implemented a similar model for their district, according to Fattal, with parents of the K-5 students expressing such a degree of support for the measure that year-round schooling actually continued for those students as they entered sixth grade, and so on.

“Ninety percent of the days, the kids are still going (to school) at the same time the rest of the families are,” Fattal said. “The difference is they go a little longer in June and come back a little earlier in August, with a break every nine weeks or so.”

“I need to continue to find out information from our community and where they stand on that,” he added. “If we ever decided to make a decision to do something like that here, that’s a lot of work. I’ve got to know how many families would want it.”

During public comment, Corunna resident and parent Jill Mack expressed concerns about altering school start times because her son, a second-grader at Elsa Meyer, has a variety of medical issues.

“My son has half of a heart, so he’s exhausted,” Mack said. “He goes to bed at 6:30 p.m. because he physically cannot stay awake. We get him up around 6:45 a.m., and that’s a stretch. He’s got to get tube feeds, he’s got to eat (orally), I have to help him get ready because he had a stroke and has some physical disabilities. To get out the door by 7:55 a.m. is already a stretch, but then again, if we had to stay longer that would also be a stretch because he goes to bed so early.”

Fattal said no decisions have been made, and reiterated the community input sessions are only intended to gain perspective.

At the conclusion of the sessions, Corunna schools will be providing an online survey to all parents and staff via the district’s mobile app.

Once all of the information is gathered, Fattal said the administration will get to work on developing the best strategies for the district to move forward.

Though this is the first year of such community input meetings, Fattal said it’s something he intends to do for years to come.

“I’ve got to make sure that I spend time every year reaching out to the community,” Fattal said, “giving them an opportunity to express what they like about what’s going on at the schools, (as well as) what are ways that we can get better?”

The remaining community input sessions are: