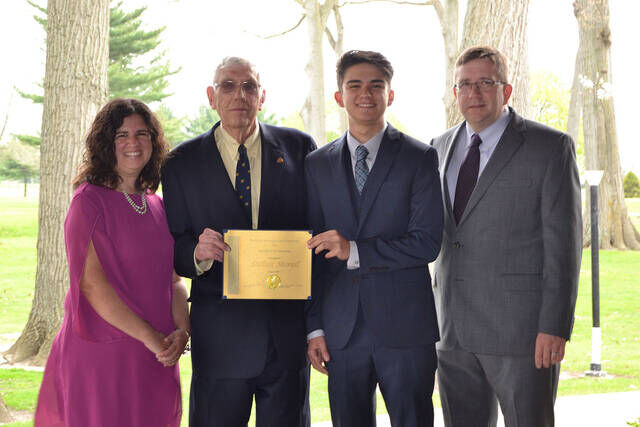 Dillan Morell, recipient of the 2022 Bruce and Jacqueline Cook Scholarship; standing with benefactor, Bruce Cook, and his parents, Jay and Imagene Morell. 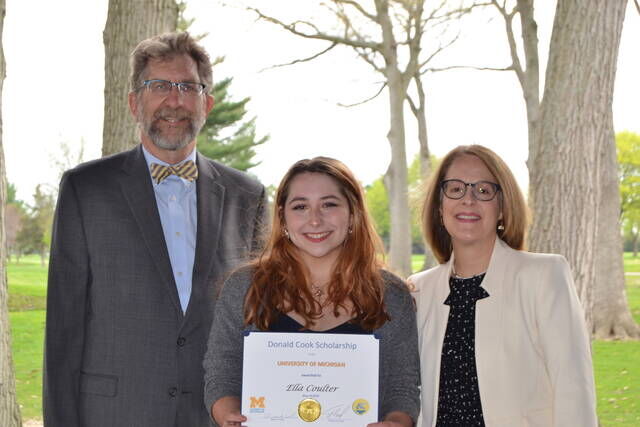 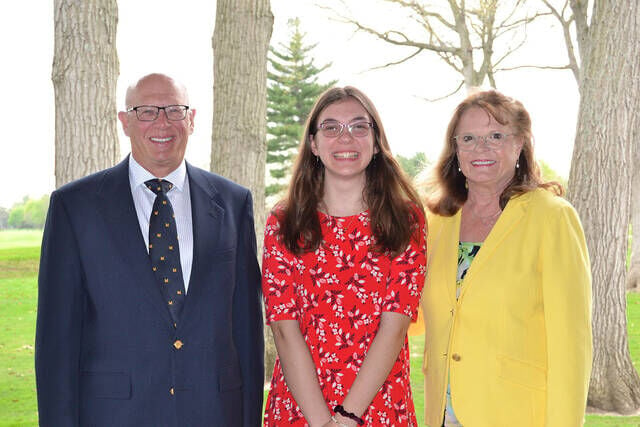 Anya Wasilenski, center, was the recipient of the first Kuhlman Family Scholarship. She is pictured with benefactors Dr. Paul and Kit Kuhlman.

Dillan Morell, recipient of the 2022 Bruce and Jacqueline Cook Scholarship; standing with benefactor, Bruce Cook, and his parents, Jay and Imagene Morell.

Anya Wasilenski, center, was the recipient of the first Kuhlman Family Scholarship. She is pictured with benefactors Dr. Paul and Kit Kuhlman.

OWOSSO — The Cook Family Foundation held its Annual Student Recognition Dinner on Tuesday at Owosso Country Club, where a new scholarship was awarded.

Twenty-two students received scholarships to the University of Michigan, most of which were between $3,000 and $10,000. Three students were awarded scholarships of higher value.

The new scholarship is called the Kuhlman Family Scholarship. It is worth $20,000 and is funded by Dr. Paul and Kit Kuhlman. It was awarded to Anya Wasilenski, a student at Byron High School. The scholarship is administered through the Cook Family Foundation.

Wasilenski is valedictorian of her class, the National Honors Society president, the student body president, marching band drum major, and she helps lead the robotics team. She also plays volleyball, basketball and softball. Wasilenski’s major is undecided, but she is enrolled in the College of Engineering.

Paul Kuhlman said they hope to continue funding the scholarship.

The recipient was Dillan Morell, the co-valedictorian of his class at New Lothrop High School. He participates in the National Honors Society and cross country team. He received the Eagle Scout Award last year and a Michigan Regents Merit scholarship. Morell is going to major in computer science and he is interested in a career that involves software development or artificial intelligence.

The Donald Cook Scholarship, worth $40,000 and named in honor of the Foundation’s benefactor, was given by Michigan Byron student Ella Coulter.

Coulter is the salutatorian of her class, the student council vice president, the treasurer for the National Honors Society, and the safety captain of the Byron robotics team. She also plays volleyball and softball. Coulter wants to pursue a PhD in behavioral science. She also received a Michigan Regents Merit scholarship.

The Cook Family Foundation listed the rest of the scholarship winners in a press release on Tuesday:

The guest speaker at the Student Recognition Dinner was Carrie Throm, the assistant vice president of leadership and major gifts programs at the University of Michigan.

“You deserve to be at Michigan,” Throm said as she explained that while college can be overwhelming, the students have no reason to doubt that they belong at the Unviersity.

Throm continued to encourage the students and wish them well.

Would you support military intervention in Taiwan if China invaded?