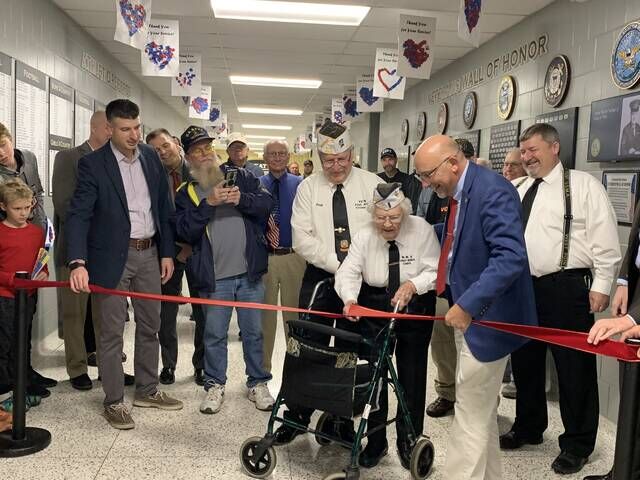 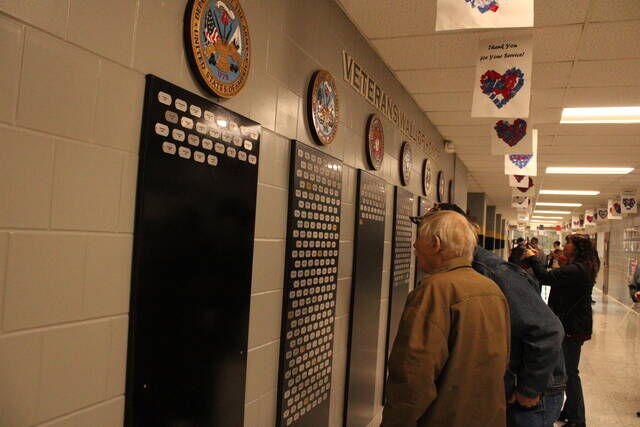 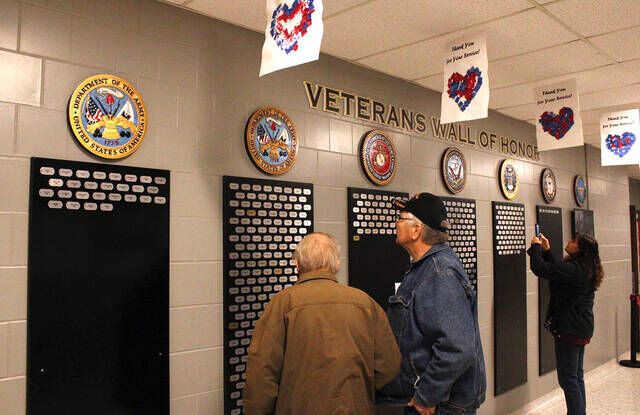 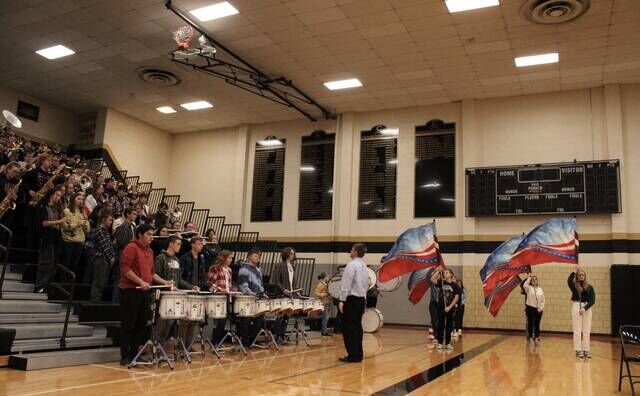 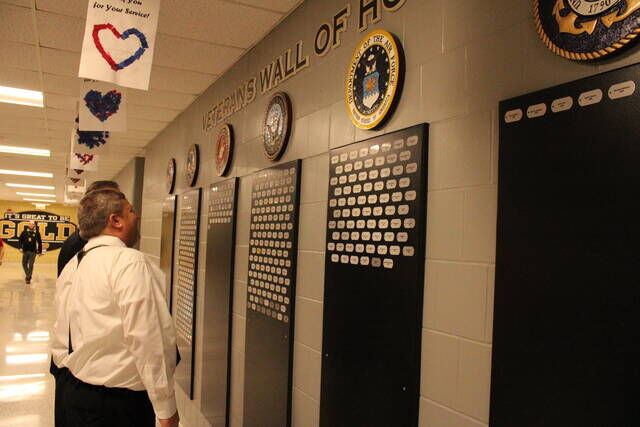 CORUNNA — Corunna High School graduates who served their country now have a space commemorating their service inside the school.

In celebration of Veterans Day Thursday, district officials unveiled a newly installed “Veterans Wall of Honor” inside the high school, an expansive display that includes the names of more than 300 Corunna graduates who served — and counting.

“I think it’s important that our students recognize that we have a long history here in this school of people serving others, and the greatest service are those people who have dedicated their lives to the armed forces to protect our freedoms,” Superintendent John Fattal said. “We just felt that it’s important that our kids see that on a daily basis and really we wanted that as a role model for our kids.”

Inspired by a similar wall at Grand Rapids Forest Hills High School, Fattal and Corunna Athletic Director Jason Beldyga developed plans for the Wall of Honor in early 2020. The display, located along a main hallway outside the high school cafeteria, includes emblems signifying each of the five branches of the military.

Below each emblem are cases containing “dog tags” etched with the name and graduating class of each veteran. Gold tags signify graduates who were killed in the line of duty, of which there are 10, while gray tags represent those who were fortunate enough to make it back home.

Any man or woman who has attended Corunna schools and served in the military — from the present back to CHS’s first graduating class in 1870 — is eligible to be included on the wall.

Names will be added as they are received. A form is available on the district’s website, corunna.k12.mi.us, or individuals may call the district office, (989) 743- 6338, to join.

“Sometimes it pays to be the oldest,” Hosking quipped, drawing a roar of laughter from those in attendance. She served in the Army Nurse Corps from 1942 to 1946, with stints in Michigan, Wisconsin, Oklahoma, California and Australia.

Beldyga, acknowledging the 300-plus names on the wall and more to come — he’s had 15 Corunna graduates contact him in the past two days about adding their names — said Thursday’s ceremony was incredible.

“The whole premise of this was to have our kids recognize the sacrifice that graduates have made and now to actually have those who have made that sacrifice in to see the wall is pretty special,” he said.

Veterans were greeted by a standing ovation from high school students inside the school’s gymnasium shortly after Thursday’s ribbon-cutting, a small thank you in recognition of their many years of service to the country.

“As I look around, I’m really just overwhelmed by the pride of communities like Corunna, and other communities throughout Shiawassee County, throughout the district that I represent,” said Barrett, a 21-year Army veteran with stints in South Korea, Guantanamo Bay, Kuwait and Iraq. “I’m one veteran among many, but really the pride that you all have here is what gives me encouragement and hope that we are on a really stable (path) in our country to pass the baton and pass the torch to the next generation.”

“This hall of honor and place of honor, the symbolism of that cannot be overstated where we see within Corunna Public Schools a connected legacy, a connected narrative across generations where we understand that freedom is an inheritance, a very fragile one that is passed from generation to generation,” Frederick said. “When you truly understand, when you see the names on that wall and the dates, all of the generational inheritance that we have is a blessing.”

Sawyer, a 1985 Corunna High School graduate, is a part of that connected legacy. He graduated from West Point in 1989, served as an Army officer during the first Gulf War and was re-deployed from the Michigan National Guard to join the NATO peacekeeping mission in Bosnia in the 1990s.

Now in his 20th year as Corunna’s city manager, Sawyer spoke Thursday of his younger years, recalling exactly where he was sitting 40 years ago — in the tuba section — during a similar assembly at the high school.

At that time, Sawyer didn’t know what he wanted to do in the future, but a trip to the guidance office ultimately spurred an interest in West Point, which in turn sparked his military career.

It’s an experience Sawyer is incredibly grateful for. He urged students to ask their loved ones who served about their experiences, something he wished he had done with his grandfather who served in World War II.

“I never once sat down with grandpa and said, ‘Tell me about your experience, tell me about getting shot, tell me about the two years you spent in Percy Jones General Hospital,’ you know?” Sawyer said. “This is Veterans Day, it’s a day to honor, to thank the veterans. They’re here, they’re here living. This is the day for the living. Don’t wait for Memorial Day to think about people and wish you had asked those questions.”

As for being recognized by his alma mater?

“It’s really neat,” Sawyer said. “I’m never comfortable talking about myself or being recognized, but it’s quite an honor and it’s neat to see them do this because it helps bring us all together, too.”