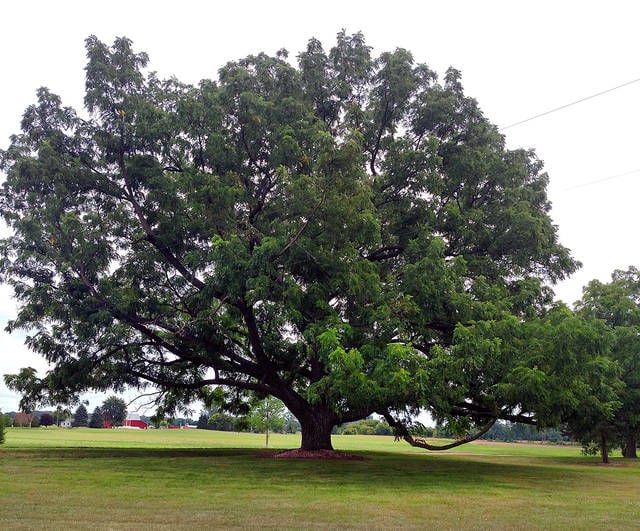 This black walnut tree, located on East Brooks Road in Venice Township, has been named the largest tree from Shiawassee County in the 2018-19 Michigan Big Tree Hunt contest. 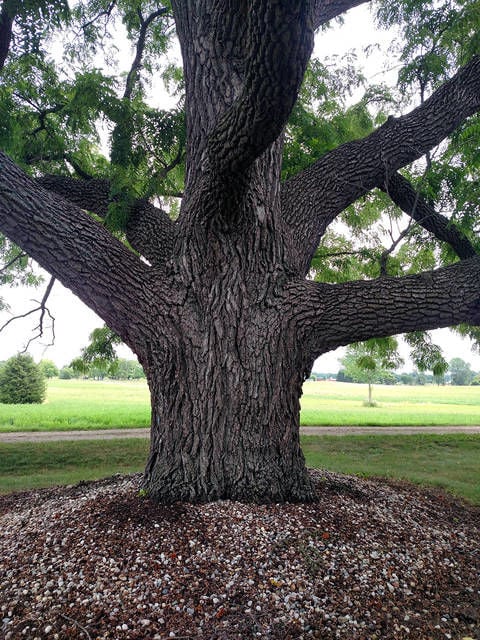 This black walnut tree, located on East Brooks Road in Venice Township, has been named the largest tree from Shiawassee County in the 2018-19 Michigan Big Tree Hunt contest.

VENICE TWP. — The black walnut stands majestically in the front yard of Kelly Iott and Mike Chrzan’s home, an example of near-perfect symmetry and form in nature.

Now, the estimated 282-year-old tree is an award winner, having been named the largest in Shiawassee County in the 2018-19 Michigan Big Tree Hunt contest put on by ReLeaf Michigan, a statewide, volunteer tree-planting and education nonprofit.

Iott and Chrzan received the good news a couple of weeks ago.

“I was really excited — the tree really deserves it,” Iott said Thursday at the couple’s home, 8740 E. Brooks Road. “You look at it and you’re in awe that a walnut tree could be that big. Some of the branches are bigger around than the trunks on many trees.”

The walnut was judged by the size of its circumference, 197 inches, which made it the biggest tree in the county nominated for the 14th biennial contest.

Using an accepted calculus for determining a tree’s age without cutting it and counting rings, Iott and Chrzan estimate their tree sprouted in 1737, within a five-year margin of error.

“It’s just amazing to know how long it’s been there — to think about how many years it’s been around and all it has lived through,” said Chrzan, owner of R Factor Spray Foam insulation company and general manager of Great Lakes Fabrication & Machining in Vernon Township.

Iott, a fourth-grade teacher at Corunna Middle School, heard about the contest from friend Kyle Freeman, and thought, why not enter? After all, her walnut tree has been attracting attention from total strangers, UPS drivers and friends all through the eight years she and Chrzan have owned the house on Brooks.

People will pull in the driveway, stop and gawk. One group of three older ladies sat in their car for so long, Iott thought they were lost. When she walked out to greet them, the car windows came down and she heard the lady in back say to her friends, “I told you that was a black walnut.”

Chrzan and Iott want to make sure the tree continues to dazzle those who gaze on it for many years to come. A Consumers Energy crew showed up at their house recently, prepared to cut branches to accommodate the power lines that run through them.

The couple objected, and an arborist and forester consulted by Consumers both agreed that the power lines should be moved before the walnut tree is cut. Consumers backed off, Iott said, but she remains concerned.

“My worry is I will come home some day and a crew that doesn’t know what the arborist and forester said will have tampered with the tree,” she said.

The Michigan Big Tree Hunt, which started last spring and ended earlier this fall, garnered 700 entries from people from 80 of Michigan’s 83 counties.

The winning entries for each county were verified on-site by Michigan arborists, foresters from tree services, consulting firms and government agencies.

According to ReLeaf officials, the largest trees in the state are growing in a variety of places, including residential yards, parks, cemeteries and hiking trails.

Contest winners include “the largest tree in Michigan,” a red oak measuring 384 inches (32-plus feet) around, located in the city of Marion in Osceola County.

The largest white pine — Michigan’s state tree — discovered by tree hunters has a circumference of 204 inches and grows in Askel in Houghton County.

The largest tree aged 15 years or younger is a cottonwood found in Saline in Washtenaw County, measuring 312 inches around.

The contest also helps discover trees eligible for the National Register of Big Trees, which is updated every spring and fall by American Forests, the national forestry association. Michigan currently has only one registered national champion.

On Nov. 23, ReLeaf held an awards ceremony at the Chippewa Nature Center in Midland, with nearly 100 people attending. Certificates and prizes were awarded for the largest trees submitted from each county, for overall largest tree in different age groups and for new potential state champion trees.

Iott and Chrzan were eager to attend but couldn’t go after Iott became ill. She said she was disappointed she didn’t get the chance to chat and network with other tree lovers.

“This tree is the focal point of our property,” Iott said. “If it could talk, it would have some stories to tell.”

ReLeaf’s stated mission is to educate the public on the value of trees and how to properly select, plant and maintain them. Its board is made up primarily of arborists, foresters and researchers advocate preserving Michigan’s trees.

Since 1988, ReLeaf has worked with more than 400 communities across the state, planting nearly 30,000 trees on public property in cities, townships and villages. ReLeaf plants trees that are already substantial in size, which officials said results in a higher survival rate.