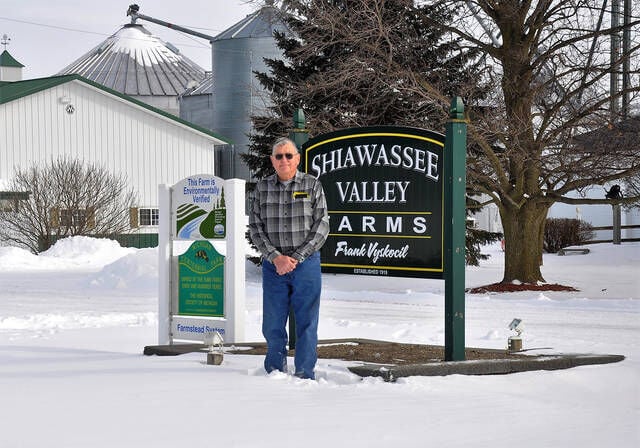 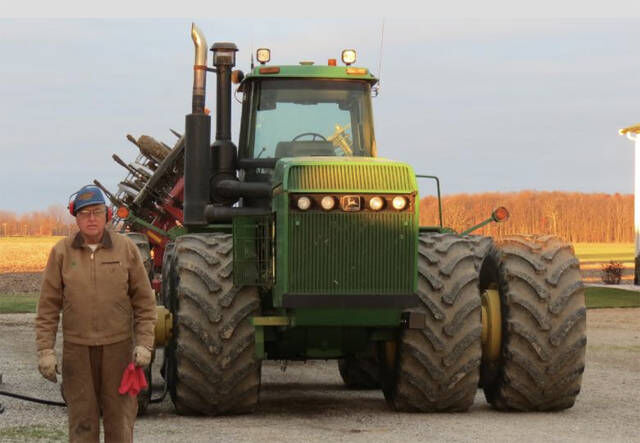 HAZELTON TWP. — Frank Vyskocil was all of 14 years old when he took over his father’s farming operation.

His mother and grandmother were counting on the young man. So was his father, who told Vyskocil on the day he died he hoped his son would keep the farm going and make it succeed.

As for Vyskocil himself, he was just named the 2021 Michigan Master Farmer, a prestigious award from Michigan Farmer magazine acknowledging a lifetime of achievement.

What would his father say if he knew about the award?

No doubt about it. The Michigan Master Farmer award is agriculture’s highest honor in the state. As Michigan Farmer put it: “If agriculture had an Academy Awards, (Vyskocil) would be in line to receive the equivalent of an Oscar for starring in outstanding farm management, innovation, conservation and leadership.”

Vyskocil said he was surprised and grateful for the award, but being the humble kind of guy he is, he was quick to share credit for Shiawassee Valley Farms’ success with his late wife, three farm “associates” and two daughters.

“You know, it’s like football — it takes a team,” he told Michigan Farmer.

Over the years, Vyskocil and his team have incorporated new technology while expanding and improving what started out as his grandfather’s farm, planting in a three-year rotation certified wheat, corn, soybeans and seed beans.

Vyskocil is also active in his professional community, serving on the board of directors of the Michigan Wheat Program, including as treasurer.

“In addition to serving on the state wheat board, he also went to national meetings for the National Association of Wheat Growers to bring more learning and perspectives back to Michigan,” said Jody Pollok-Newsom, executive director of Michigan Wheat Program, who nominated Vyskocil for Michigan Master Farmer.

“Frank is a very good farmer and was always an active participant in discussions on funding of research projects,” she continued. “He was particularly focused on what would make the most financial sense for growers. It takes a good farmer like Frank to know where and how to prioritize funding.”

Vyskocil’s three full-time associates (he rejects the term “employee”) are Duane Bowns, who has been working at the farm for more than 20 years. Bowns selects seeds and plants, performs shop work and grain delivery, and redesigns equipment.

Kulhanek is an agronomist who graduated from Michigan State University and has approached Vyskocil with fresh ideas, he said. A second agronomist tests Shiawassee Valley Farms soil every three years.

“The more minds to take care of a problem, the better,” Vyskocil told Michigan Farmer. “We all have different ideas. We bounce them off one another until we get the best solution.”

The four men meet for a briefing in Vyskocil’s cozy workshop every morning to discuss the day’s job duties and again at the end of the day to talk about any problem that arose so it can be addressed the next day.

Frank himself does a bit of everything, including the harvesting.

“I enjoy selecting seed and fertilizer and watching it grow,” he said in Michigan Farmer. “And to see the accomplishment at the end — from inside the cab — it’s unbelievable what the soil can do if you treat it right. I’m proud of what the farm has become and where it’s heading.”

Vyskocil, a full-time farmer for 60 years, never seriously considered switching to a different line of work — not even when a record-breaking flood hit in September 1986 that hurt his and others’ farms badly. In those days, there was no crop insurance.

Another tough time came at the beginning of his career. Vyskocil’s grandfather, Frank Sr., started the farm in 1918 with 60 acres and grew sugar beets. Frank II took over until he died at age 36, the result of heart problems.

The difficult, weighty decisions the 14-year-old Vyskocil had to make included selling the farm’s dairy cows the following spring. When his grandfather died not long after his father, the youngest Vyskocil had to rely on neighboring farmers for mentoring.

The FFA program at Corunna High School was a crucial training ground.Vyskocil was named FFA State Farmer in 1965. Two years later, he was chosen as an FFA American Farmer — the first in Corunna’s history.

Despite hardships, Vyskocil was determined not to give up. The fact is, he loves the farming life. He doesn’t have any hobbies, he said, because farming is both his profession and hobby. He can’t even conceive of retiring.

“I like the outdoor life and working with Mother Nature, and with different people in the community that also enjoy the farming and the freedom,” Vyskocil said.

Frank also learned a lot as a member of FFA. In 1965, he was the FFA State Farmer. Two years later, he was named an FFA American Farmer — the first from Corunna High School. Later, he co-founded the Corunna FFA Alumni group, which still exists.

A few months after graduating from Corunna in 1965, Vyskocil married Sue White, his high school sweetheart. The pair labored side by side in the fields, Sue working the dirt and her husband planting seeds, while their daughters played nearby.

“Sue was my bookkeeper, my right-hand person,” Frank Vyskocil said. He stayed by her side until she died in 2009 following an illness.

In addition to farming and raising a family, Vyskocil has been active in the community. He served on the Corunna Board of Education for 24 years, 22 as president. He belongs to the Corunna Public Schools Education Foundation and was chairman of the Hazelton Township Board of review. He’s a member of St. Joseph Catholic Church in Owosso.

Vyskocil has used the latest farm technology over the years, including GPS yield mapping. He has partnered with the Shiawassee Soil Conservation District to adopt best management practices.

Part of Vyskocil’s farming philosophy is to keep a close eye on profits. One cost-saving measure has been to expand his grain storage to hold 90 percent of his crops.

“It’s not all about how hard you work or how many acres you farm. You need to know your costs per acre and keep expenses down,” he told Michigan Farmer. “It’s important to control marketing. Corn can swing 20 cents a day — boy, if that doesn’t make you nervous and excited sometimes.”

He offered advice to those just getting started in farming.

“Crawl, walk and run. … Don’t skip a step because it could cause you to have problems in your farming career,” Vysocil said in Michigan Farmer. “And take advice from your dad.”

Because of COVID-19, Michigan Farmer plans to honor Vyskocil and two fellow honorees — Waldron Farms of Stanton and Jim Wilson of Yale — at the 2022 Great Lakes Crop Summit.