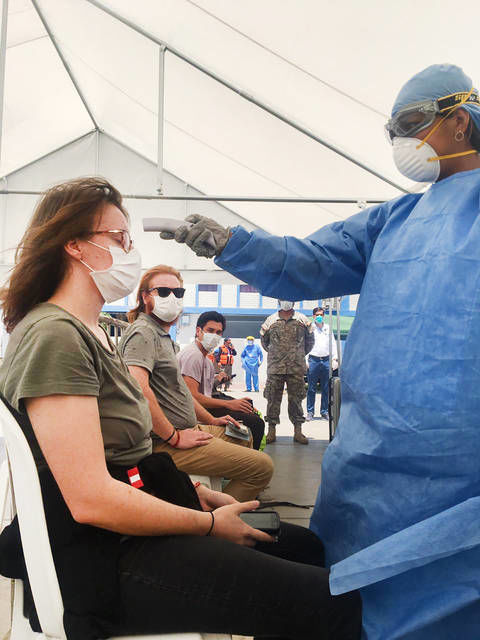 A Peace Corps volunteer has her temperature taken before boarding a flight from Lima, Peru, to Miami. 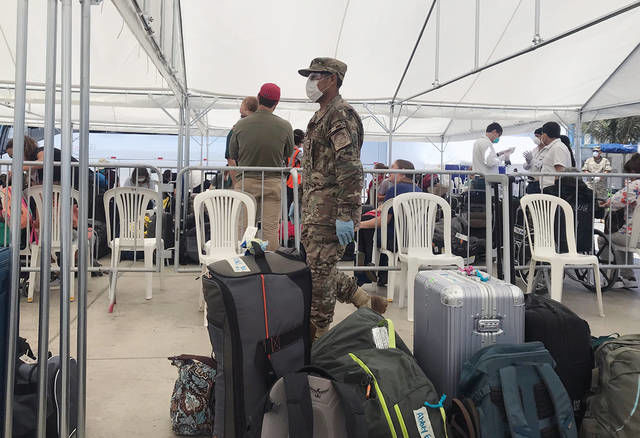 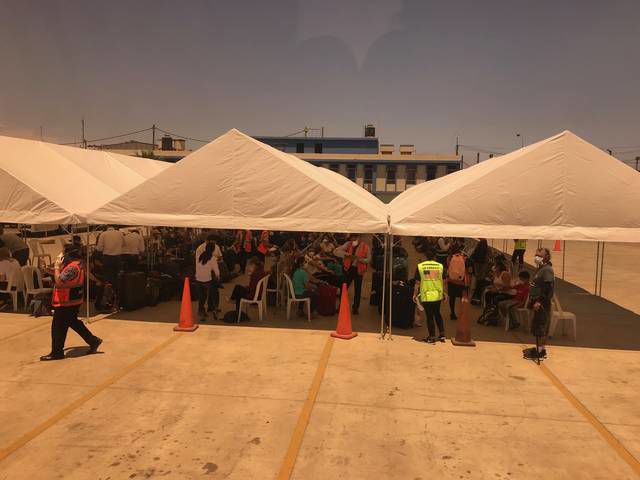 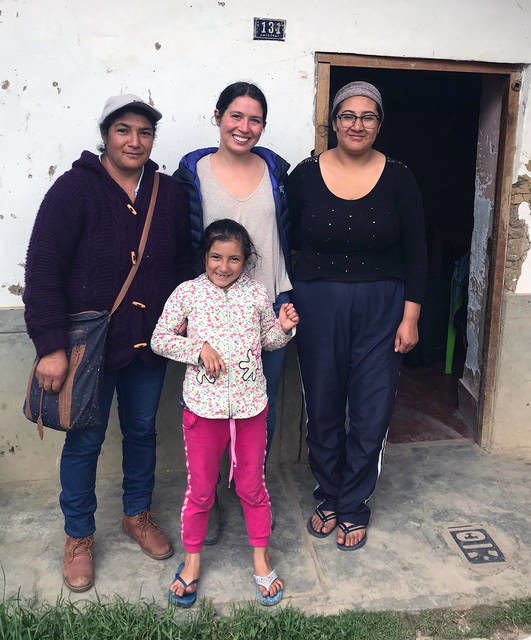 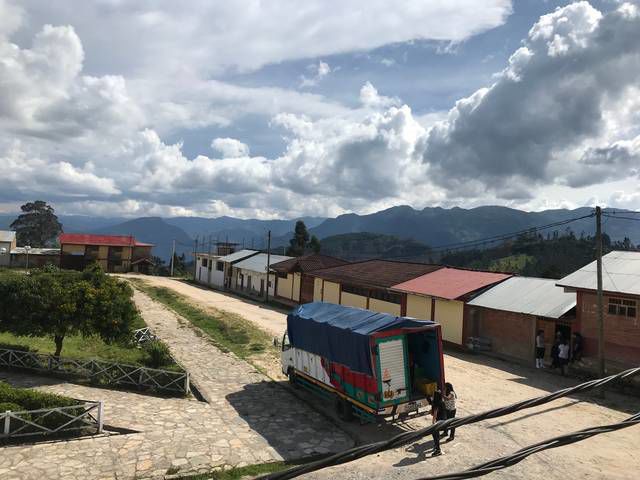 Seen in this photo is the Peruvian community in which Abbey Edwards was working. 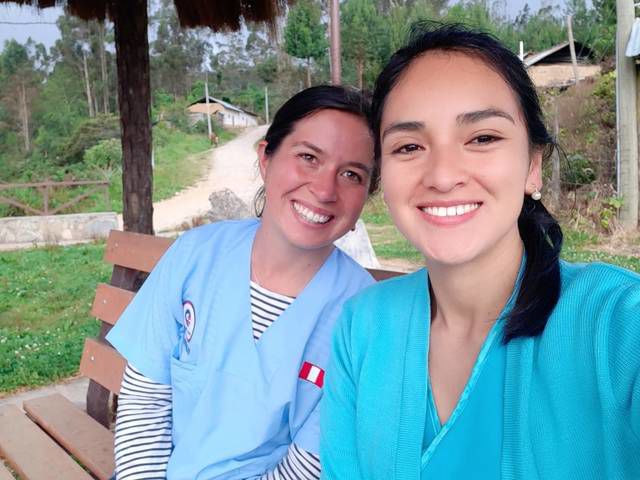 Seen at left is Abbey Edwards, a Peace Corps volunteer, during her posting in Peru. 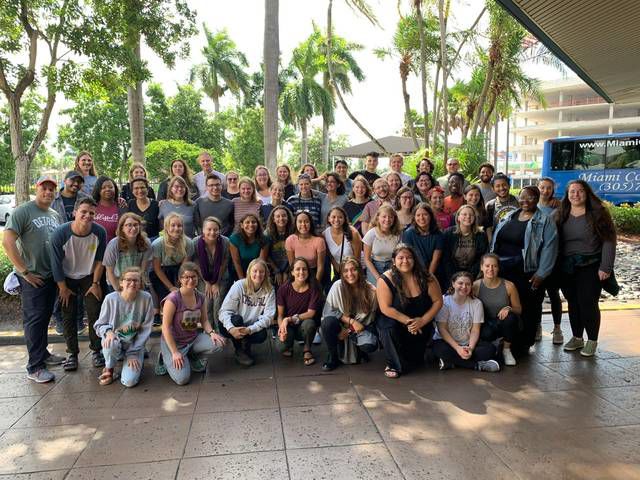 Seen in this photo is a group of Peace Corps volunteers during a swearing-in ceremony. 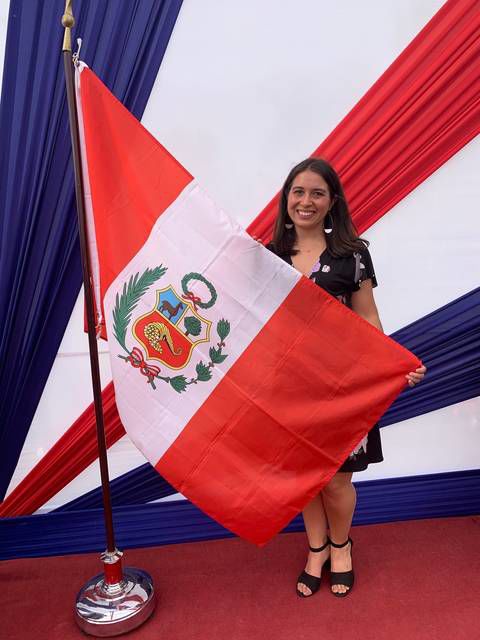 Seen with a Peruvian flag is Abbey Edwards.

A Peace Corps volunteer has her temperature taken before boarding a flight from Lima, Peru, to Miami.

Seen in this photo is the Peruvian community in which Abbey Edwards was working.

Seen at left is Abbey Edwards, a Peace Corps volunteer, during her posting in Peru.

Seen in this photo is a group of Peace Corps volunteers during a swearing-in ceremony.

Seen with a Peruvian flag is Abbey Edwards.

Edwards and other Peace Corps volunteers were evacuated by the U.S. government because of the coronavirus pandemic.

Edwards had been working in Peru since September 2019 in a community of about 600 people. She received word from the Peace Corps March 15 that she and other Americans would be evacuated. But because of the remote location of the area Edwards was working in — a 24-hour bus ride from Lima, the capital and nearest airport — her journey back to Owosso was just beginning.

“We had to get 200 volunteers consolidated in Lima,” Edwards said Wednesday. “We had a lot of issues with that. The same day, Peru shut down all its borders, all transportation and instituted a mandatory 15-day quarantine for all its citizens. There was really no one enforcing that in Peru. Starting on March 16, there were police in the streets. It was a very strict and sudden change of pace. If you’re 24 hours from Lima, and you can’t travel on the roads, it’s hard.”

She said her bus was stopped by police 22 times during the trip to Lima, with police searching the bus and checking everyone’s passports. Edwards and her fellow Americans left for Lima on March 16, but didn’t arrive in the capital until March 20.

“We left from an Air Force base in Lima on Monday for Miami,” Edwards said. “Two chartered U.S. Embassy flights evacuated all of us. It was interesting to see. Getting on the plane was very exciting. A lot of us, including tourists, had waited a long time to get on a plane. But I think there was a lot of anxiety, too. It was surreal it was actually happening after a week.”

Despite the pandemic, Edwards said she was somewhat disappointed to be returning to the U.S., and wants to continue her work in community health, specializing in anemia, malnutrition and adolescent pregnancy in Peru.

“It was a smaller community than Owosso, so everyone knows everyone else — even more than Owosso. Agriculture is the main way of life,” Edwards said. “I was in a region near the border with Ecuador. (Amazonas is) known as the eyebrow of the jungle. Part of the region is in the Andes Mountains, and part is the Amazon jungle. I lived in the mountain parts. It’s a really unique country. They’re very different culturally and with the climate.”

Abbey’s mother Sara Edwards, however, is glad to have her daughter home safely.

“It’s mixed emotions as a parent,” Sara Edwards said. “I’m heartbroken for her, having to cut her service short. She had planned on this experience for a long time. To have it pulled out from under her is heartbreaking. But as a mother, we’re thrilled to have her home. I can’t hug her as much as I want to. It was quite a harrowing ordeal, finding out she’d have to be evacuated. We’re just hoping that we all come through this.”

Abbey Edwards said there wasn’t a single reason she joined the Peace Corps, but her course of study at the University of Michigan meant she was uniquely qualified. She majored in community and global health and minored in Spanish.

“I can sum it up by saying I knew I wanted to work in international development work,” Edwards said. “The Peace Corps was always something I thought about. I thought it was a good thing to do after graduation, to put myself in that world. To grow personally and professionally, to do a bit of good in this world.”

Despite her disappointment, Edwards said she understands the government’s response, and urges others to take the pandemic seriously.

“Being part of the public health world and having gone through this, people should really take this seriously,” she said. “If the Peace Corps deems it necessary to evacuate 7,000 of us from our communities and jobs around the world, I think we can all stick it out for a couple of weeks.”