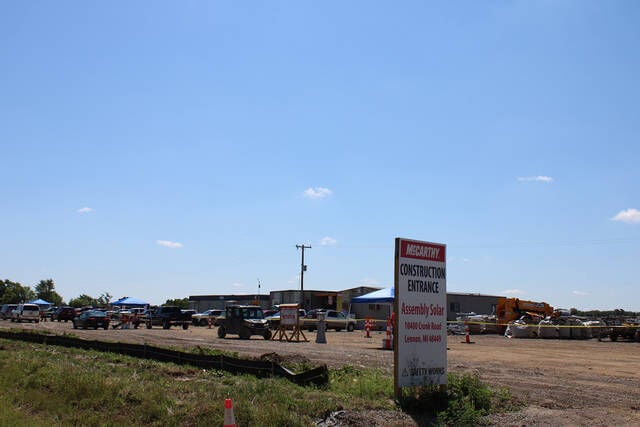 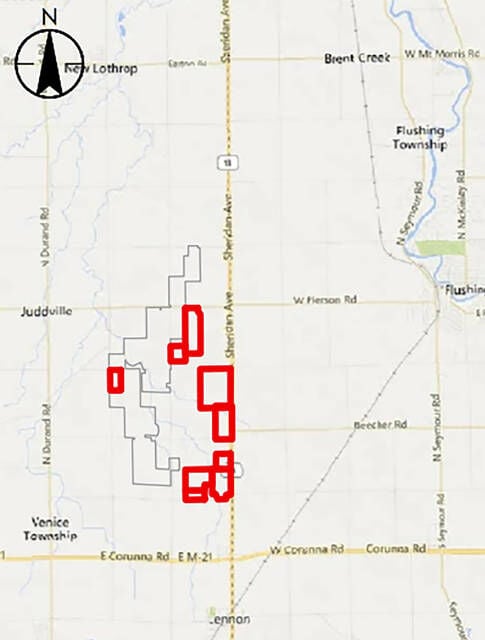 This map displays all three phases of the Assembly Solar Project. Phases 1 and 2 are outlined in gray, while the additional acreage added to the project in May — phase 3 — is outlined in red. 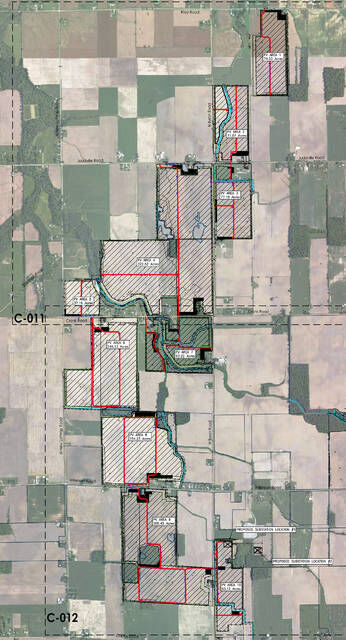 This map displays phases 1 and 2 of the Assembly Solar project. The company has since added more acreage between the original project sites and M-13. 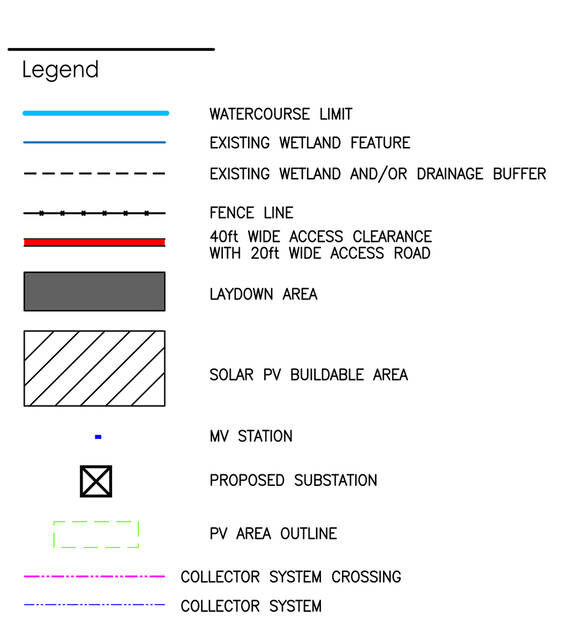 Key to the map

This map displays all three phases of the Assembly Solar Project. Phases 1 and 2 are outlined in gray, while the additional acreage added to the project in May — phase 3 — is outlined in red.

This map displays phases 1 and 2 of the Assembly Solar project. The company has since added more acreage between the original project sites and M-13.

Key to the map

Work on the 1,900-acre, $250-million solar project in Hazelton and Venice townships began in 2019 with piles and grading underway before the year ended.

Construction at the site has continued in full force throughout 2020, according to Project Manager Brian Timmer of McCarthy Building Companies, the project’s construction firm. The solar development has been deemed essential under Gov. Gretchen Whitmer’s executive orders related to the COVID-19 pandemic, he said.

To date, the solar farm is about 20 percent complete, Timmer continued. The project is expected to wrap up sometime in late 2021.

Sean Harris, senior development manager at Ranger Power, said it’s been great to see the strides crews have made at the site.

“It’s really exciting,” Harris said Thursday via phone. “I think (solar) panels will start to get delivered here within the next couple weeks so it’ll be great to start seeing those going up.”

The Shiawassee County Planning Commission unanimously approved Ranger Power’s special use permit for the Assembly Solar project in January 2019. The solar farm is being developed on a sprawling 1,200-acre site leased from eight area landowners, for a minimum of 20 years, and a maximum of 40, and is expected to reduce carbon dioxide emissions by the equivalent of 77,702 cars per year, officials said.

Ranger Power received approval for an additional 700 acres for the solar array in May, bringing the project’s total footprint to approximately 1,900 acres, according to Harris, though not all of that added acreage will be developed due to setbacks, wetlands and trees. The added parcels are primarily scattered west of M-13 in Venice Township, per the site plan.

Once complete, the Assembly Solar Project will generate at least 239 megawatts of electricity for power companies, which would sell electricity to Consumers Energy. On top of the $250-million investment, $16 million in construction spending is anticipated in the county, company representatives said.

The solar farm will be set up in large blocks of panels which, when tilted, will be a maximum 16 feet tall. The farm will be quiet except for a “slight humming noise” from inverters, which will be placed in the middle of the panel blocks — which themselves will be no closer than 50 feet from property lines — to limit the sound. In October 2018, a study the company conducted showed the noise did not exceed ordinance limits.

McCarthy Building Companies, the construction contractor for the project, began conducting interviews in Owosso to hire people to work at the site in October 2019. McCarthy hired 25 people in 2019 and will hire 250 people in 2020 from Shiawassee, Ingham and Genesee counties to work on the project.

Construction at the site will be completed in three phases, according to Harris.

Assembly Solar III, the 700 acres acquired west of M-13 by Ranger Power in May, will be operational by the end of 2021 and will generate approximately 79 megawatts, he added.

The company plans to connect into an existing electrical substation west of M-13 near Wilkinson Road in Venice Township.

“The Assembly Solar Project is a big win for our community, bringing jobs and much needed tax revenue to Shiawassee County,” Justin Horvath, president and CEO of the Shiawassee Economic Development Partnership, said previously. “This project is pumping tax revenue into Shiawassee County, and schools, small businesses like restaurants and hardware stores, libraries, and fire and police services, as well as roads and bridges all stand to benefit from this project.”

“It’s been a really smooth and enjoyable process working with the county and the townships and the local residents,” Harris said. “I think it’s a great example of how a project, a utility-scale solar project, can and should proceed. We’re really proud of the project and excited to be bringing in this large investment to the community.”