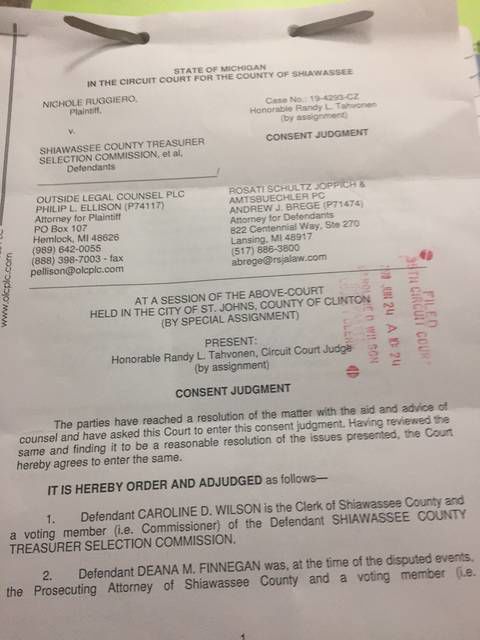 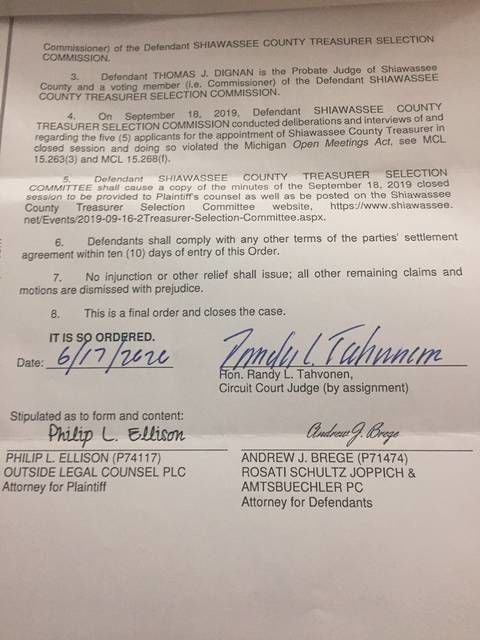 CORUNNA — A Clinton County judge has ruled the committee that interviewed and voted in secret to select a new county treasurer in September 2019 violated the Open Meetings Act, according to a court order filed Wednesday in 35th Circuit Court.

The committee was comprised of former Shiawassee County Prosecutor Deana Finnegan, current county clerk Caroline Wilson and Probate Court Judge Thomas Dignan, who in September appointed Julie Sorenson as treasurer. Sorenson took over for Thomas Dwyer, who served in that capacity from 1996 until he resigned in August 2019.

“The entire premise of the OMA is to allow for transparency and to hold governing bodies accountable,” Ruggiero said Friday of Tahvonen’s ruling. “It is my intent to continue to hold this county responsible for any action that may violate the OMA or Freedom of Information Act rules. The governing body has no absolutely no problem holding citizens accountable when a law is violated.”

Wilson and Dignan were unavailable for comment Friday. Finnegan retired from her position as prosecutor March 31.

In his ruling, Tahvonen also ordered that the selection committee “shall cause a copy of the minutes of the Sept. 18, 2019, closed session to be provided to plaintiff’s counsel, as well as placed on the Shiawassee County’s website at https://www.shiawassee.net/Events/2019-09-16-2Treasurer-Selection-Committee.aspx.”

A copy of the minutes has already been placed on the county’s website. The minutes show that Wilson, Finnegan and Dignan entered into closed session at 4:13 p.m. Sept. 18, 2019. They interviewed five candidates, before discussions, and each then stated their top three candidates. The commission then “discussed (the) voting process” and “elected to vote by ballot,” before adjourning the session at 6:13 p.m.

The committee in 2019 returned for another session after the original vote after The Argus-Press filed a Freedom of Information Act request seeking interview transcripts and notes. The committee briefly discussed the candidates in public and conducted a new vote in public to again name Sorenson as treasurer.

The Michigan OMA states the law applies to “[A]ny state or local legislative or governing body, including a board, commission, committee, subcommittee, authority, or council, that is empowered by state constitution, statute, charter, ordinance, resolution, or rule to exercise governmental or proprietary authority or perform a governmental or proprietary function; a lessee of such a body performing an essential public purpose and function pursuant to the lease agreement.”

The OMA also prohibits a “voting procedure at a public meeting that prevents citizens from knowing how members of a public body have voted.”

After months of hearings in the case, the Shiawassee County Board of Commissioners voted 3-2 in May to accept a settlement offer from Ellison. As part of that settlement agreement, the county agreed to admit fault in having violated the OMA.

As part of Tahvonen’s ruling, the county was also required to pay Ruggiero’s attorney costs. The county’s insurance carrier is responsible for payment.

“The purpose of this lawsuit was to put counties like Shiawassee and their county boards and committees on notice that you have to follow the OMA in Michigan,” Ellison said Friday.