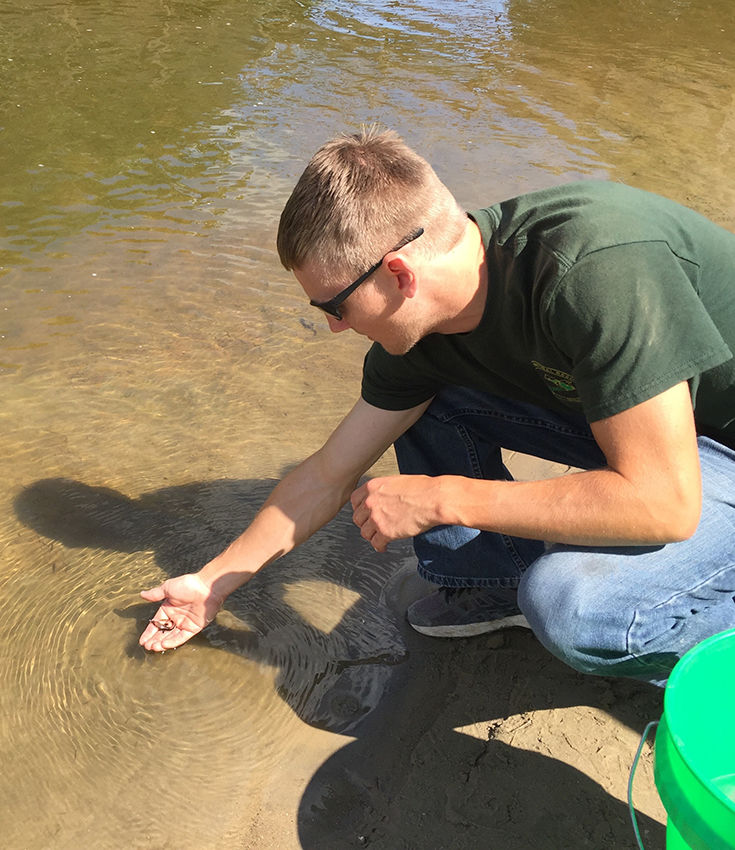 Cameron Marsrow releases a baby sturgeon into the Shiawassee River Friday in at Cole Park in Chesaning. 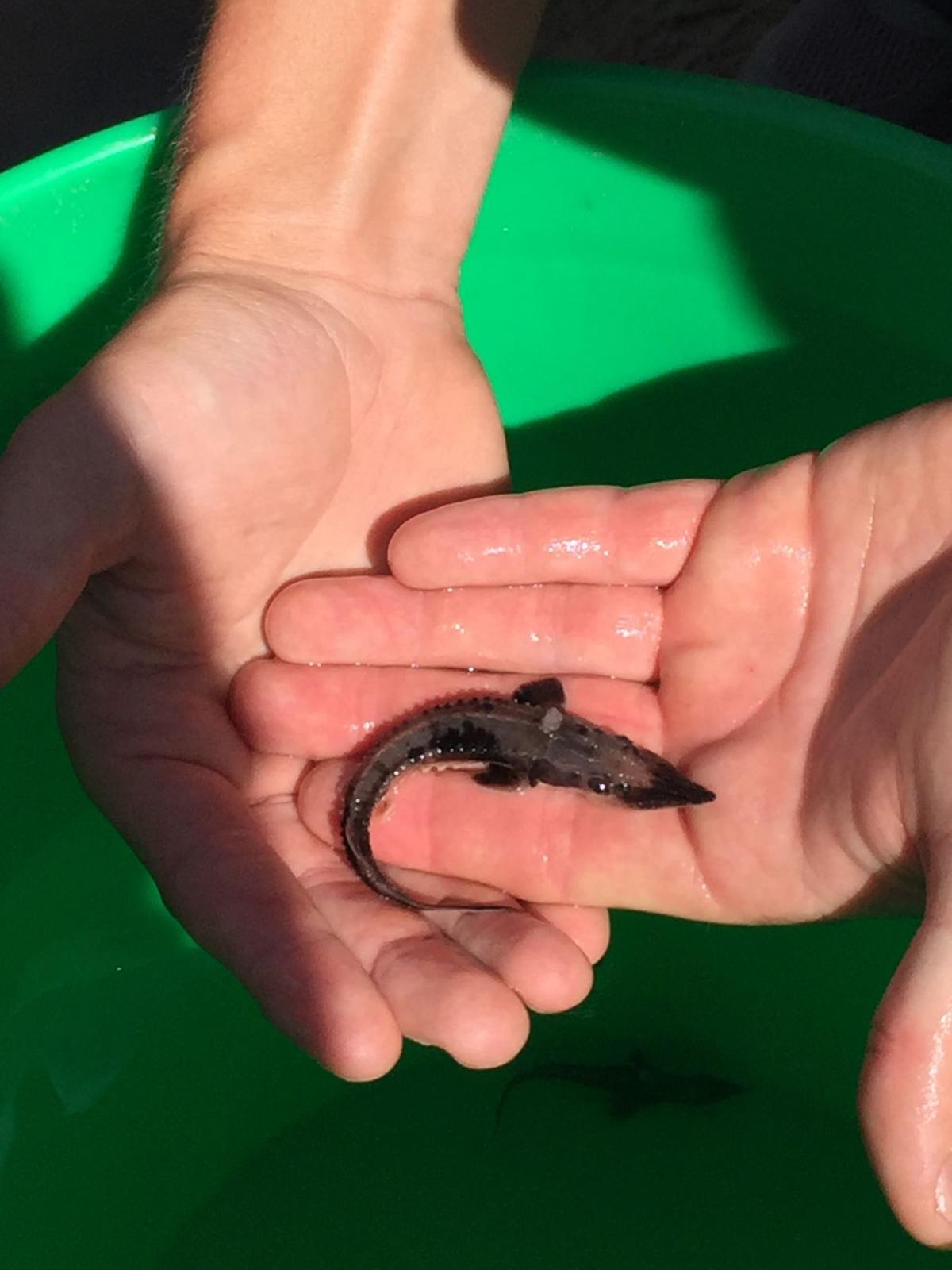 Approximately 125 hatchery-raised lake sturgeon were released into the Shiawassee River Friday, in an effort to reintroduce the species to its native habitat. 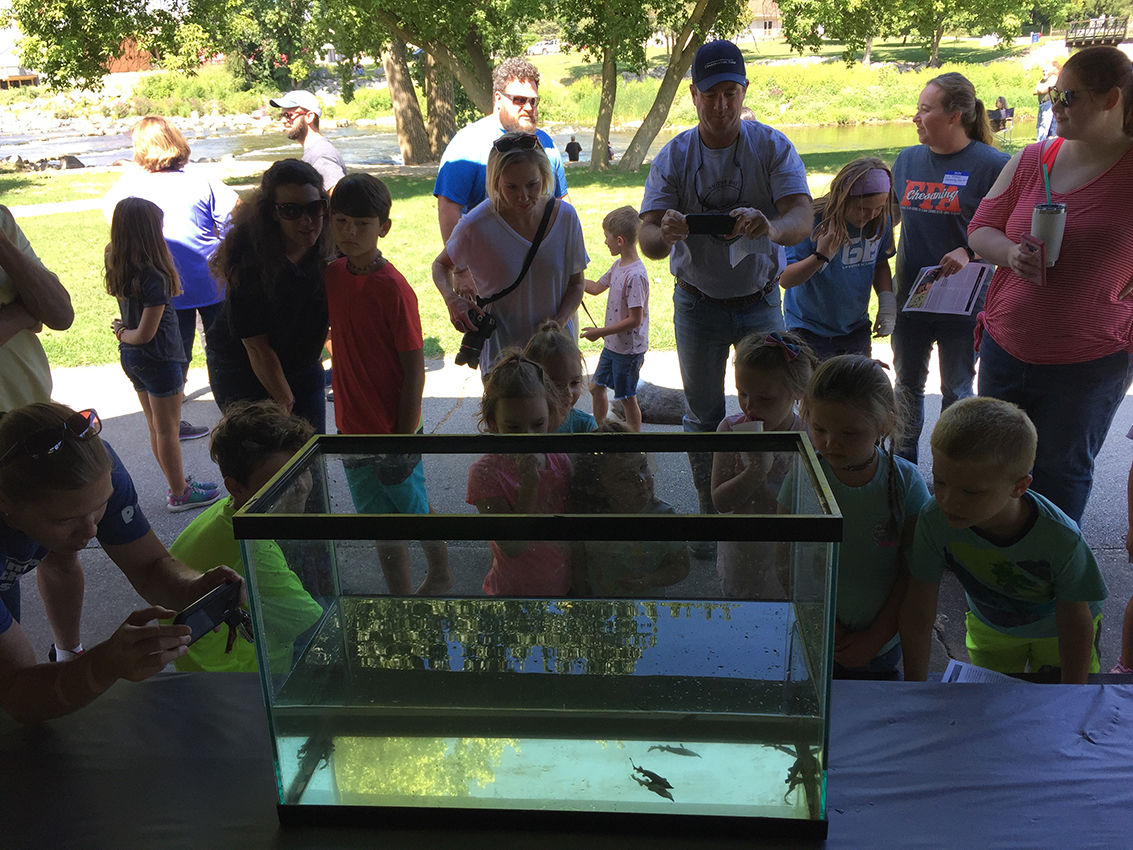 Children take a closer look at a few baby sturgeon Friday prior to their release into the Shiawassee River.

Cameron Marsrow releases a baby sturgeon into the Shiawassee River Friday in at Cole Park in Chesaning.

Approximately 125 hatchery-raised lake sturgeon were released into the Shiawassee River Friday, in an effort to reintroduce the species to its native habitat.

Children take a closer look at a few baby sturgeon Friday prior to their release into the Shiawassee River.

CHESANING — More than 100 baby sturgeon were released into the Shiawassee River in Chesaning Friday, in an effort to reintroduce the species to its native habitat.

The sturgeon release was hosted by the Friends of the Shiawassee River, and was one of four in the Saginaw Bay Watershed Friday, as lake sturgeon were also set free into the Tittabawassee River, the Cass River and the Flint River. In total, approximately 520 lake sturgeon were released across the four sites, in an effort to restore the sturgeon to a self-sustaining level in Michigan, according to Mike Kelly, director of the Great Lakes office of The Conservation Fund.

Kelly, who manages the Saginaw Bay Watershed Initiative Network (WIN) in his role, said it was great to see the outpouring of community support for one of the keystone species of the Saginaw Bay system.

“Sturgeon were one of the most prolific and abundant fish in the system, and the fact that they’ve been around for 170 million years and are described as dinosaurs, kids think that’s pretty cool,” Kelly said. “And parents think that’s cool, I mean, how often do you get to touch a dinosaur?”

The lake sturgeon were raised at the Black River Sturgeon Hatchery, according to Kelly, which is located northwest of Onaway in Cheyboygan County.

It’s the second year in a row that sturgeon have been released in the Shiawassee, Kelly said.

The removal of the Chesaning dam in 2009, as well as the ongoing removal of both the Shiatown dam and the Corunna dam have been contributing factors in the decision to reintroduce the lake sturgeon to the Shiawassee River, he added.

“On a lot of these rivers, some of the best spawning habitat is above the dam,” Kelly said. “Now, fish are freely able to make it up there. It wouldn’t have done us any good to do a sturgeon restoration if we couldn’t get them to where they used to spawn 150 years ago.”

The sturgeon release events have been supported by a variety of partners, including Michigan Sea Grant, Michigan State University Extension and the U.S. Fish and Wildlife Service (FWS).

“I think it’s incumbent upon us, if we have an opportunity to restore a historically important fish species — both to communities and cultures in the area — to try to do that,” Kelly continued. “This is a fish species that by and large was eradicated from the system by our actions, you know, whether it was building dams or agricultural pollution or habitiat destruction…The fish did really well for 170 million years, it’s been the last couple hundred where they’ve struggled, and coincidentally that’s about the same time we started building dams and polluting rivers.”

Lorraine Austin, executive director of the Friends of the Shiawassee River, said the event serves as a reminder of why decrepit dams are being removed.

“We were most pleased not only with the number of people that turned out, but with the percentage that were kids, because they’re the stewards of tomorrow and they need to start learning young what’s going on,” Austin said. “The Friends are very involved in the removal of the Shiatown Dam and the Corunna dam, so when people see things like this and know why the dams are coming out, I think it really makes a lot more sense to them.”

Kelly added that he thinks there’s been a tremendous shift in the mindset of the public over the past 40 years.

“We can go back and clean up some of these things and make it habitable for these native species that disappeared,” Kelly said. “That’s why I think these events are important, both from the perspective of returning these native species, but also bringing people to the rivers and showing them what’s possible, what good work is being done, and hopefully some of these kids that we see here are going to be our next generation of fisheries biologists.”

According to a Friends of the Shiawassee River press release, lake sturgeon can grow up to seven feet long and can weigh up to 300 pounds. The slow-maturing fish won’t begin reproducing until they are 15 to 20 years old, the release said.

Another round of sturgeon will be released at Cole Park on Sept. 21. For more information, visit saginawbaysturgeon.org.