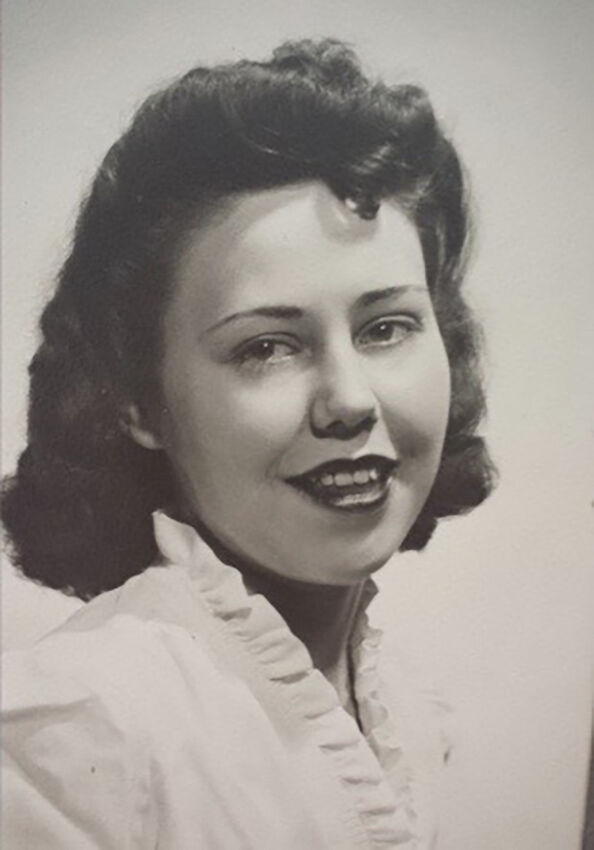 CORUNNA — When Anita Moore dropped out of high school during her senior year in 1944 to join the workforce in support of the ongoing World War II effort, she knew her mother was disappointed.

If only her mother could see her now.

On Friday, Moore, now 94, finally received her diploma from Corunna High School — 76 years after she left school to join the workforce.

Moore was able to get her diploma through Corunna Public Schools’ existing board policy, which allows the district to award diplomas to individuals who left school early to serve the country during World War II, the Korean War or Vietnam.

“This is so wonderful,” Moore, who growing up in Corunna was known by her maiden name Anita Rowell, said.

Citing a patriotic desire to serve her country, Moore dropped out of high school just weeks before her graduation in 1944 at the age of 17, accepting a job at a local car dealership as a bookkeeper.

“I had all the credits (to graduate), everything,” Moore said. “The only thing I didn’t do was turn in the papers…I had to take the papers to the office to request my diploma and I just never turned them in.”

Within a few months, Moore took on a second bookkeeping job at Corunna Manufacturing Company, which at the time was producing various supplies in support of the war effort, she said.

Despite having a strong work ethic and steady income, Moore said she struggled to gain approval from her mother Maudie, who explained that as the oldest of three, Moore was setting a poor example for her siblings by not finishing school.

“That bothered me for a long time,” Moore said. “When I would think about (not graduating) I would be disappointed with myself and I’d think there had to be something I could do about it, but I didn’t know where to go.”

That all changed a few weeks ago.

While visiting with Moore at her Bay City home on a Sunday afternoon, her granddaughter, Jannifer Tyrrell, said the two began discussing Moore’s younger years.

At one point in the conversation, Moore mentioned her deep regret over not finishing high school.

“I’m one of the oldest grandchildren and, in my entire 46 years, I have never heard my grandma say she regretted anything until the day she said that to me. It made me want to cry,” Tyrrell said. “My instant reaction was that at 94 years old, my grandmother should have no regrets and if there was something I could do about it, then I was going to do it.”

Within a matter of days, Tyrrell reached out to Corunna Public Schools Superintendent John Fattal, sending a lengthy email describing her grandmother’s situation in hopes that there was something the district could do.

“My initial thought was, ‘Oh my gosh, we need to figure out a way to make this happen,’” Fattal said, noting he immediately contacted the district’s high school principal and members of the board of education to review the district’s board policy.

After a bit of research, Fattal informed Tyrrell that her grandmother would be able to receive her diploma at last, as the district’s board policy allows individuals who left school early to serve the country during World War II, the Korean War or Vietnam to receive an honorary diploma.

In light of the ongoing coronavirus pandemic, Tyrrell requested that the district send out Moore’s diploma via mail. She received it Friday.

Fattal said he and his fellow staff were more than happy to set a little bit of time aside to make Moore’s wish a reality.

“She exemplified what we would like all of our students to do, and that is to serve others and sacrifice to serve others,” Fattal said. “It’s just a feel-good story. There’s so much indecisiveness that’s happening right now in our society and certainly in our school district with plans that everybody has to make. It’s nice to be able to say, ‘Hey, this is a positive.’”

For Moore, the diploma couldn’t arrive a moment too soon.

“It means more to me than I can put into words,” she said.

Moore currently resides in Bay City. She married Don Moore of Owosso in 1946, and together they celebrated 55 years of marriage before his passing in 2001.

Congratulations Mrs. Moore! And thank you for being a strong, leading example for all of us women! Bless you and your family.