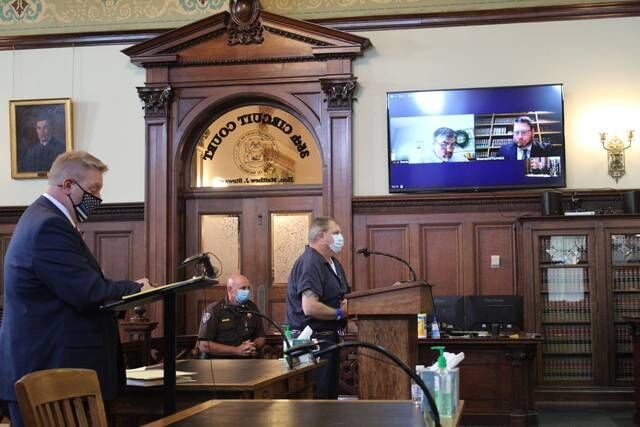 Edward May, center, is seen during his sentencing hearing Thursday in 35th Circuit Court in Corunna. 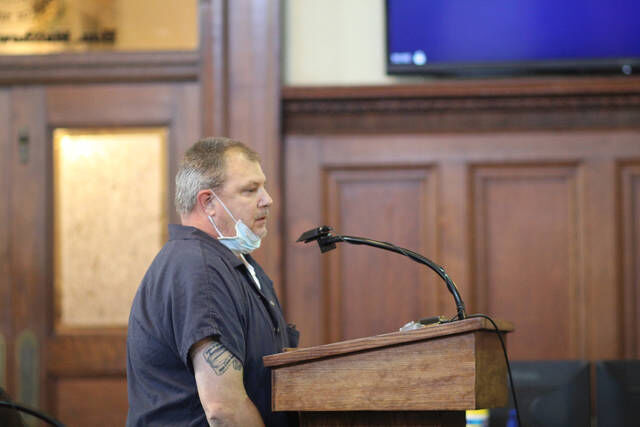 Edward May is seen during his sentencing hearing Thursday in 35th Circuit Court in Corunna.

Edward May, center, is seen during his sentencing hearing Thursday in 35th Circuit Court in Corunna.

Edward May is seen during his sentencing hearing Thursday in 35th Circuit Court in Corunna.

CORUNNA — A Lansing man was sentenced to prison Thursday morning in 35th Circuit Court for smuggling drugs into the St. Louis Correctional Facility where he worked as a guard.

Edward May, 53, was sentenced to one year, five months to 240 months with the Michigan Department of Corrections, and ordered to pay court costs and fines. He was credited with 39 days served toward his sentence.

Thirty-fifth Circuit Court Judge Matthew Stewart was incredulous that May, who worked as a prison guard for 18 years, was caught smuggling drugs into the facility where he worked.

“I was shocked to see the advisory guidelines in this case for smuggling 7 grams of cocaine and 128 Suboxone into a state prison. That’s unfathomable to the court, but that’s how it’s scored … You knew better than most,” Stewart said. “This was not your first attempt to smuggle contraband into the prison … Mr. May smuggled tobacco into prison, and it escalated to marijuana and Suboxone.”

Defense attorney Doug Corwin asked for a term of probation for May, pointing to his previously clean criminal record and years of service as a prison guard.

“Zero tolerance and probation,” Corwin said. “I think he would be a good candidate for probation.”

Prosecutor Scott Koerner asked the court to impose a prison sentence, due to a drug problem inside state prisons, and because May’s actions put others’ safety in jeopardy.

“Our prisons have a drug problem and this defendant’s actions contributed to it,” Koerner said. “He put people in danger. He put the prison in danger, himself in danger. He doesn’t seem to be too remorseful … He was put in a position of trust, and he let down and violated that trust from the people of the state.”

In a short statement, May called his actions a mistake, and apologized for embarrassing the Michigan Department of Corrections. In the pre-sentence investigation report, he claimed he brought drugs into the prison because he was being blackmailed by an inmate.

“This is the worst thing I’ve ever done. I lost everything,” May said. “I embarrassed the department. I wish I could do it over again. It bothers me every day. This was stupid.”

May was charged in April with delivery/manufacture of a controlled substance and creation/delivery of an analogue after he was caught bringing the drugs into the prison.

He was arraigned April 2 in 66th District Court by Judge Ward Clarkson; he pleaded not guilty.

He pleaded guilty June 5 pursuant to an agreement with prosecutors. In return for his plea, prosecutors dismissed the analogue charge.

“You have a better understanding of the dangers posed by your actions,” Stewart said, before announcing the sentence. “You know what kind of threat you created. You had firsthand knowledge of the consequences of your criminal activity. You’ve seen day-to-day life inside prison, and you know what life is like for the inmates there.”