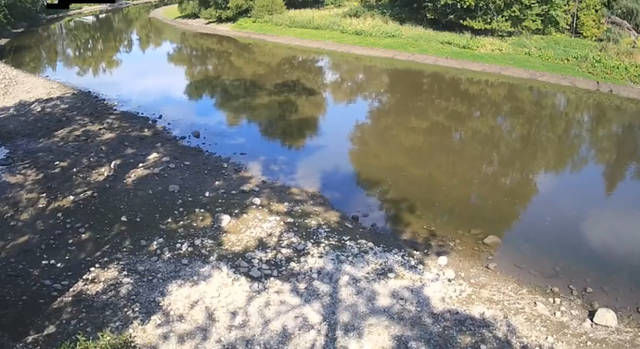 A livestream screen grab of the Shiawassee River looking upstream from the dam area. 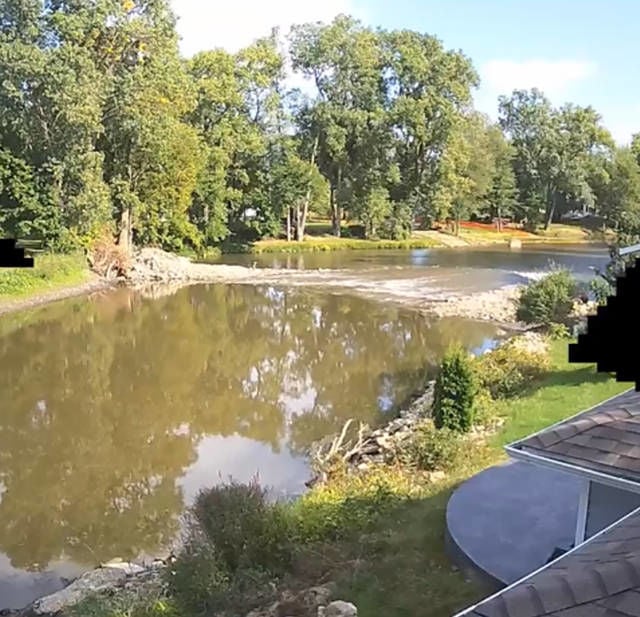 A livestream screen grab of the Shiawassee River looking downstream toward the dam area.

A livestream screen grab of the Shiawassee River looking upstream from the dam area.

A livestream screen grab of the Shiawassee River looking downstream toward the dam area.

CORUNNA — Although Heritage Park is closed for the duration of the Corunna dam removal and restoration project, area residents can still watch the action in real-time through the Friends of the Shiawassee River’s free, 24-hour livestream documenting the changes.

Friends Program Coordinator Sarah Baker said the idea for the livestream at shiawasseeriver.org was developed by the organization’s board.

“We wanted people to be able to see it and be a part of it and be excited about it. That was, I think, the main goal with the cameras, to still allow people to get involved even though the park is blocked off, as well as to keep everybody safe,” Baker said. “So far, we’ve had really positive interactions with people. A lot of people have been thanking us on our Facebook page for doing this… People are interested.”

The city of Corunna is in the early stages of a $1 million project to remove the old dam on the Shiawassee River just north of downtown. The project will remove the decrepit cement and stone structure and replace it with rock rapids — removing a drowning and flood danger and allowing fish passage further upstream.

The livestream launched Sept. 11 and had approximately 2,000 views in its first week, according to Baker. Two separate cameras along the river near the Friends’ office, 538 N. Shiawassee St. provide 24/7 live footage of the project.

Adaptive Technology Solutions and DayStarr Communications, both of Owosso, provided the necessary equipment to support the stream at no cost, according to Baker.

The equipment has been donated to the Friends on a temporary basis, Baker added, as the organization plans to offer the stream through the fall, though if enough interest and funds are generated, the stream could become permanent.

“It would cost about $1,800 to purchase the equipment,” Executive Director Lorraine Austin said. “If anybody would want to donate to us, they could do that online on our website, or they could mail something to our address, or come into our office.”

“If the interest is there and people want to help raise money for it, we could do it,” Baker added.

Originally, as preliminary work by contractor M.J. VanDamme Inc. began at the site last month, the lower portion of Heritage Park remained open, but issues with people getting too close to the heavy equipment operators forced the city to close the park entirely, according to City Assessor Merilee Lawson.

“We really, really wanted — and the contractors wanted — to try to find a spot where the people could actually watch the removal of the dam,” Lawson said. “But with people getting too close, the contractors were concerned. We’re glad people can watch it from the camera, that’s been really good. That has definitely helped.”

Once completed, the dam removal project will benefit the entire ecosystem of the river, according to Baker.

“It’s really going to help with the fish migration. People are always excited about that because it’ll make for better fishing upstream than what they’ve been able to have. We’ve heard from a lot of walleye fishermen that are really excited because as of right now, it seems that most of the walleye pretty much stop at the Corunna dam,” Baker said. “It’s actually been so deep back here and so mucky with all of the sediment that we haven’t even been able to collect (macroinvertebrates) above the dam, so we’re really excited to be able to get some collection, some data for the macroinvertebrates back here this year. It’ll help everything, all the way down it’ll start to improve and we’ll be able to capture that with our data.”

Baker added that the largest misconception surrounding the project is that it will reduce the river to a creek.

“The same amount of water is flowing down the river as it always has, it just will not be backed up right here in this area, so it will narrow and we’ll probably get some complaints about the look right now where it’s shallower and the grass is not grown in yet, but I think after a couple years of the vegetation growing up through there and the natural landscape coming back it will really improve the look of things,” Baker said. “The most important thing is the health of the actual river, and I think that given some time, people will see that….Having a wide unhealthy stream isn’t necessarily a good thing if that’s not the natural state of the river, so we’re excited to get it back to its natural state.”

Contractors from M.J. VanDamme Inc. have opened up the dam in an effort to draw the water level down, City Manager Joe Sawyer said Monday. The crew is currently completing another job near Saginaw, and will return to Corunna to begin removing the concrete structure in October, he said.

CORUNNA — The removal of the Corunna dam is expected to resume soon, according to City Manager Joe Sawyer.

CORUNNA — Contractors from M.J. VanDamme Inc. are discontinuing work at the Corunna Dam site, according to City Manager Joe Sawyer, as rising …

With stay-home orders eased, have you or will you go up north?