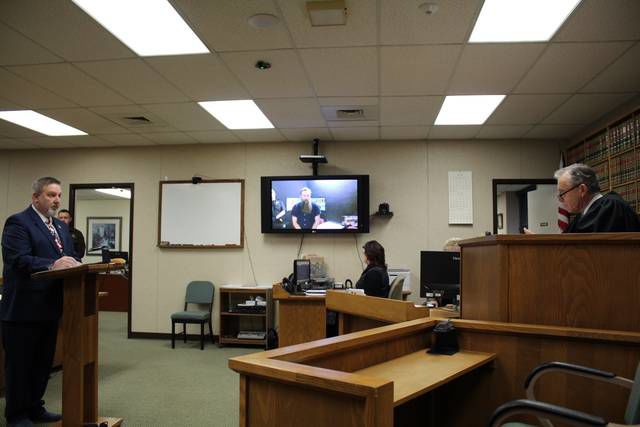 Seen in this Wednesday photo Judge Ward Clarkson's, right, 66th District Court room during a hearing for Mark Latunski, seen on the TV monitor at center. Latunski is accused of killing Kevin Bacon, 25, and partially consuming his remains. Public defender Doug Corwin is seen at left. 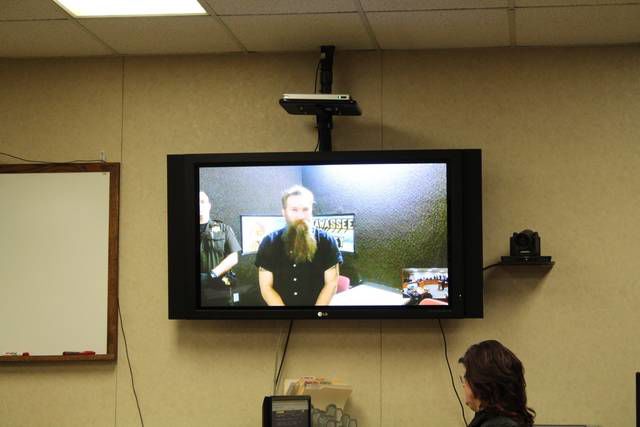 Seen in this Wednesday photo is the 66th District Court room during a hearing for Mark Latunski, seen on the TV monitor.

Seen in this Wednesday photo Judge Ward Clarkson's, right, 66th District Court room during a hearing for Mark Latunski, seen on the TV monitor at center. Latunski is accused of killing Kevin Bacon, 25, and partially consuming his remains. Public defender Doug Corwin is seen at left.

Seen in this Wednesday photo is the 66th District Court room during a hearing for Mark Latunski, seen on the TV monitor.

CORUNNA — The attorney for Mark Latunski, who is accused of killing Kevin Bacon and partially eating his remains, filed a motion this morning informing the court of his intent to provide an insanity defense.

Latunski will be sent for an evaluation to determine whether he is competent to stand trial.

“Right now, we’re seeking a possible insanity defense,” Shiawassee County Public Defender’s Office head Doug Corwin said at a press conference following the hearing. “The court granted my motion to send (Latunski) to the forensic center to be checked for competency. If they find him competent, then they will go further and do the criminal responsibility. Because we’re alleging that at the time of the offense, he was criminally insane.”

Corwin added that when the testing, interviews and background information are collected, the state forensic center in Ypsilanti will compile a report detailing the determination whether Latunski is competent to stand trial. It will take approximately 60 to 90 days before Latunski is sent for the evaluation, Corwin said, and it could take another month to complete.

“He believes he’s someone else,” Corwin continued. “He believes he is from a royal family out of Wales — the Thomas clan. Now that the other aspects have come out, and things of that nature, we had to send him for an evaluation.”

According to Corwin, Latunski has been cooperative with police and attorneys, but has “grandiose stories,” and appears to believe the stories.

Latunski gave his name as “Edgar Thomas Hill” when asked during his arraignment in December.

Corwin said Latunski previously was segregated in the Shiawassee County Jail, but “he has been sharing a cell with a couple other people.”

Latunski was arraigned Dec. 30 on felony counts of open murder and mutilation of a human body in connection with Bacon’s death. Michigan State Police, acting on a request for assistance from the Clayton Township Police Department, found Bacon’s body in Latunski’s residence Dec. 28.

According to documents, after receiving a call for assistance from Clayton Township Police, who received information that Bacon, who lived in Swartz Creek, may have been at Latunski’s 703 W. Tyrrell Road residence, MSP conducted a welfare check.

“Troopers contacted the residence and spoke with (Latunski),” the affidavit states. “Latunski granted permission for MSP to enter and to search the residence for Mr. Bacon. A search of the residence resulted in finding Mr. Bacon hanging deceased and naked from the ceiling.”

Latunski was arrested after the body was found, according to the affidavit. MSP troopers read Latunski his Miranda rights, but he allegedly confessed to Bacon’s murder.

“Mr. Latunski stated that he used a knife, stabbed (Bacon) in the back one time, then slit his throat,” the affidavit states. “Afterward, Mr. Latunski stated he wrapped rope around the ankles of Mr. Bacon and hung him from the rafters on the ceiling. In addition, Latunski admitted to using the knife to cut off Mr. Bacon’s testicles, which he later consumed.”

Numerous law enforcement sources separately told The Argus-Press this week Latunski seemed “proud” of what he had allegedly done while explaining it to police, and planned to to “make jerky” and “fertilize his fruit trees” with Bacon’s remains.

Michigan State Police troopers talked to the man at a neighbor’s home, but no charges were filed in that case.

Additionally, MSP Lt. Dave Kaiser confirmed today that there was another man Latunski met through the Grindr app, who also fled Latunski's residence Oct. 10. That individual, who is from New York, did not wish to press charges, Kaiser said, and later returned to spend several days with Latunski.

SWARTZ CREEK — Family and friends described 25-year-old Kevin Bacon, who was the victim of m…

OWOSSO — Mark Latunski, the man accused of killing, mutilating and partially consuming the body of Kevin Bacon in December 2019, was found unr…

OWOSSO — Mark Latunski, the Morrice man accused of killing Kevin Bacon in December 2019, was returned to Memorial Healthcare for the second ti…

CORUNNA — Murder defendant Mark Latunski has been declared incompetent to stand trial for the murder of 25-year-old Kevin Bacon, according to …

CORUNNA — The home where Mark Latunski allegedly killed 25-year-old Kevin Bacon in December 2019 was sold for $104,000 at public auction Wedne…

Alleged killer not competent for trial