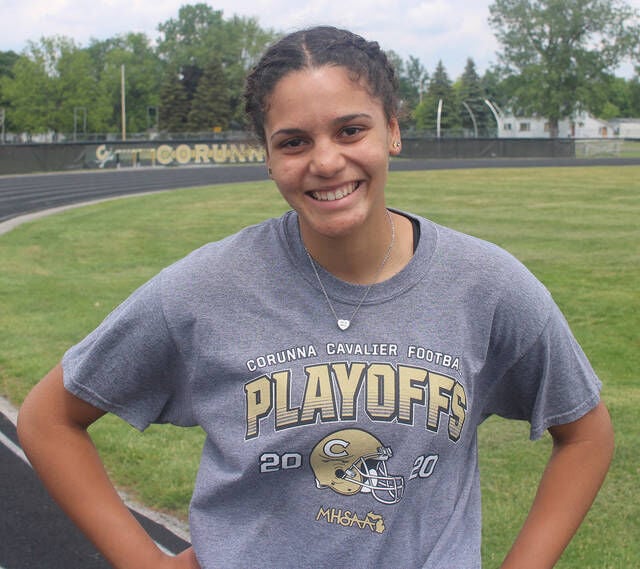 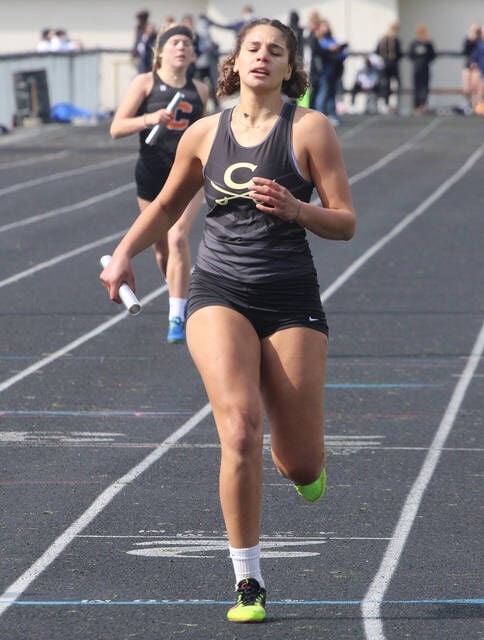 CORUNNA — It’s been a long road back to athletics for Corunna sophomore Neele’ge’ Sims, who suffered serious injuries in a two-vehicle crash last fall that took the life of her 20-year-old brother Noah.

The 16-year-old Neele’ge’ Sims, a 6-foot middle blocker for the Cavaliers’ varsity volleyball team, sustained a broken femur, broken ribs, broken wrist and broken jaw. She was hospitalized for a time and then had to undergo several surgeries, as well as physical rehabilitation that led to her missing the end of the volleyball season.

“I was in the hospital for 10 days. I went through physical therapy in Lansing and I was in that for a couple of months,” she said.

Her physical progress has been remarkable but challenging, said her mother, Jennifer Sims.

“She’s done (occupational therapy) and (physical therapy) because she couldn’t even move her wrist,” said Sims’ mother. “She could only move her wrist a half an inch after the accident. She’s had dental work that she needs done that she’s had done and she’s still in therapy actually. She’s had some added.”

Sims struggle began in October when she was one of three occupants in a car involved in a head-on collision with a semitruck on Hibbard Road near M-52 in Owosso Township. Her older brother Noah was killed and Neele’ge’ was taken by helicopter to Sparrow Hospital in Lansing.

Noah Sims, who played football and basketball at CHS, had graduated in 2019. He was a student at Northern Michigan University at the time of the crash.

Neele’ge’ Sims said she always pays tribute to her brother no matter what sport she is participating in.

“We have many shirts in tribute to him and I wear those all of the time,” she said. “I was very close to my brother but, honestly, I look at it like everything I do, I do for him. Like I play volleyball for him, I want to succeed for him.”

Sims said she has received tremendous support from her family throughout the challenge of rehab.

“Definitely my mom and my other (older) brother, Charles, have helped a lot,” Sims said. “And especially my dad (Charles Sims), definitely family members.”

“I will say this about Neele’ge’: From day one she’s been a fighter in all of this and she has put all of her heart into becoming a better person because of this accident,” Jennifer Sims said. “She’s had to overcome so much and she’s still not even close to where she was, but she will be and I’m just really proud of her.”

Despite her challenges, the teen has returned to the athletic arena. She returned to excel in volleyball as a member of an Amateur Athletic Union squad Michigan Elite Volleyball Academy, which competes in the Warren area.

In the 400 relay, Sims teamed with Lilly Bower, Josalyn Stratton and Ashlee Napier to place second at regionals and qualify for the state finals in 52.21 seconds.

“I’d say the 4x1 (is my favorite) just because it’s a team race,” Sims said. “You have your teammates and it’s just a lot more fun, honestly.”

Sims also competed in the Greater Lansing Honor Roll Meet of Champions Tuesday at Lansing Waverly. She placed sixth in the long jump (15-4) and she helped Corunna place sixth in the 400 relay (52.51 seconds).

“It was a little rough, but it was OK, and I was just getting the jitters out,” Sims said. “For the state meet, I’m just hoping to place in both events. That would be super cool.”

“Neele’ge’ has been an inspiration to everyone,” Corunna track coach Alan Montgomery said. “Going into the season, we weren’t sure what we were going to get out of her. We were just thrilled that she was going to be able to be out there competing and be part of the team.

“Where she is now, to where she began at our first track meet is nothing short of remarkable,” he said. “It has been amazing to see her confidence grow at every meet as she builds her strength back up. I feel she has truly just touched the surface in her recovery back.”

While she has excelled this spring in track, Sims, an All-Area volleyball player last fall and a first-team Argus-Press All-Area Player, said volleyball, “hands down,” is her favorite sport.

This coming fall, she is looking forward to once again playing at Corunna.

“I definitely want to play volleyball in college — that’s my ultimate goal,” Sims said. “For high school, I mean we’re looking pretty good and I’m just excited to get back on the court with the girls and everything.”

She said she is trying to eat the right foods and just continue to get stronger.

“Every day, honestly, I feel stronger,” Sims said. “I’m sore, but I ice and I take care of my body. So, we’re getting back to normal. Honestly I’m just eating good food and then I ice a lot. And then on weekends, I’m normally at (volleyball) tournaments. So I’m constantly icing and stuff.”

Sims said she hasn’t yet decided where she would like to attend college, but wants to play volleyball.

“I just want to go anywhere where I will play and where it’s warm,” Sims said with a smile. “I definitely want to get out of Michigan though.”

Should businesses be allowed to require their employees to get the COVID-19 vaccine?