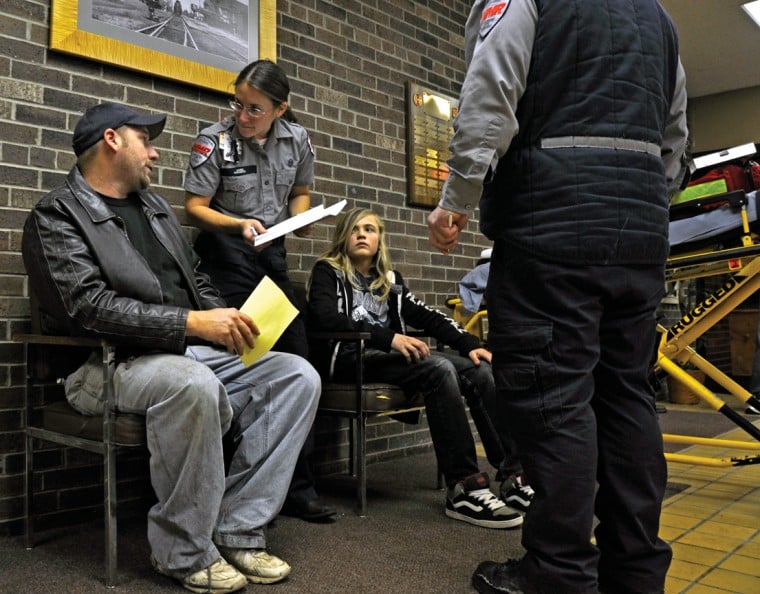 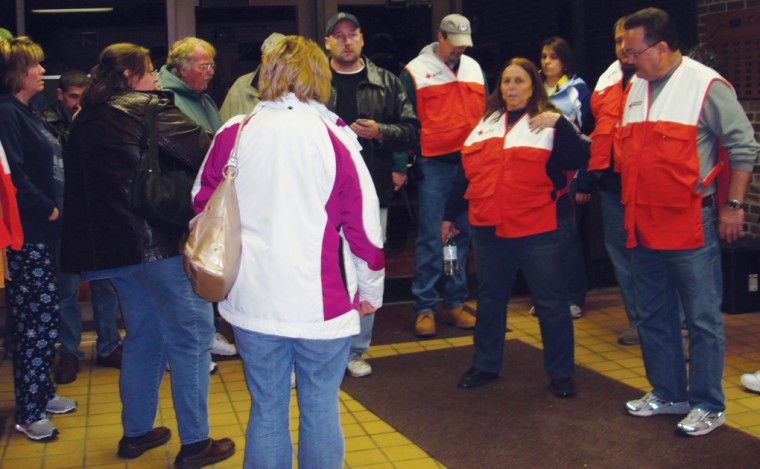 Shiawassee County Red Cross Disaster Action Team talked to the Durand residents that were evacuated from their homes Thursday night due to a train that derailed and spilled Hydrochloric acid at the Durand City Hall that served as an emergency shelter. 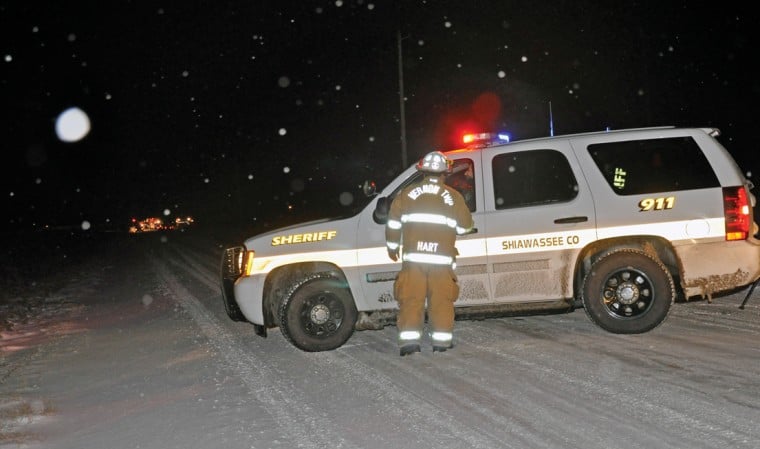 Shiawassee County Red Cross Disaster Action Team talked to the Durand residents that were evacuated from their homes Thursday night due to a train that derailed and spilled Hydrochloric acid at the Durand City Hall that served as an emergency shelter.

VERNON TWP. — A freight train that derailed Thursday night near the corner of Pittsburg and Reed roads, damaging a tanker filled with hydrochloric acid, forced residents to evacuate their homes as emergency personnel struggled to stop the leaking chemical.

The Canadian National Railway freight train was eastbound from Battle Creek to Flat Rock about 6:30 p.m. when 12 cars derailed. Three tanker cars carrying hydrochloric acid overturned onto their sides, CN Public Affairs Director Patrick Waldron said. He added one tanker was spilling hydrochloric acid and another had a drip leak.

Hazmat personnel on scene Thursday night said one tank with a capacity of 20,000 gallons was leaking and a cloud of gas from the car was drifting away from the scene. Hydrochloric acid can damage lungs, eyes, skin and other organs.

Hydrochloric acid leaking from one of the derailed cars was stopped with a patch job at 12:30 a.m. today, Waldron said.

Shortly after noon today as workers were trying to pump the chemical from the tank, fluid once again began leaking and hazmat personnel were called back to the scene.

About 35 residents who lived near the derailment will remain evacuated until the leak is cleaned up, Waldron said.

As part of the cleanup process, environmental teams were putting agricultural lime over the spilled chemical to neutralize the acid. In addition, “We are working with local officials to do air and water testing as a precaution ahead of lifting the evacuation,” he said.

How much hydrochloric acid leaked remained undetermined, and what caused the freight train to derail Thursday night “is still under investigation,” Waldron said.

“It’s going to take a long, drawn-out process what we have to deal with,” Vernon Township Fire Department Assistant Chief Bill Hart said. “We’ve got many agencies out there taking care of the situation. We’re trying to take care of it so it doesn’t harm anybody, so we’re going to do as best as we can do as with what time we have.”

Residents in the area were ordered to evacuate up to a half mile from the site of the derailment and directed to Durand City Hall, where the American Red Cross Mid-Michigan Chapter set up an emergency shelter. There was no report of any major injuries, Jenkins said. At least two resident swho evacuated reported some respiratory problems and were examined by emergency personnel.

Waldron and Jenkins said the evacuation was precautionary.

“As a precautionary measure, there were some mandatory evacuations,” Jenkins said Thursday. “However, everyone who needed to evacuate has been contacted either by the Sheriff’s Office or the fire department, and those arrangements have been made.”

About 30 evacuated residents went to city hall Thursday night, Durand City Manager Amy Roddy said. But Roddy couldn’t be sure of the total number of residents evacuated as some may have sought shelter at the home relatives or friends.

For some, like Patti Bush, 49, who resides south of Durand on Reed Road, the evacuation came as no surprise.

About 45 minutes after Bush heard a loud noise that sounded like a crash, a firefighter in a full face mask and breathing apparatus appeared at her door and informed Bush and her husband they needed to evacuate the house because of a train derailment.

At that time, they were given no other information, Bush said.

Bush grabbed her diabetic insulin and dog “Tank,” along with a change of clothes and left for Durand City Hall.

“We just don’t know anything,” Bush said Thursday night. “We don’t know if we can get back in to our house tonight.”

At least one family said they never received an evacuation notice from officials.

Clinton Sawyer, 36, who lives on Reed Road with his wife Shannon, 41, and son Tristan Cooney, 13, said he received a phone call from relatives about 8:45 p.m. Thursday telling him about the evacuation, but officials never showed up.

After finding out about the train derailment and evacuation, Clinton Sawyer and Cooney left for the Red Cross shelter at city hall, taking only what they were wearing with them.

On the way to the shelter, Clinton Sawyer said he drove through a cloud of smoke that smelled.

Once at city hall, Clinton Sawyer and Cooney both stated they were having a hard time breathing, chest pains and stomach aches.

After being examined by personnel from Durand MMR and showing no further signs of health problems, Clinton Sawyer and  Cooney were advised to call if other problems arose.

Shannon Sawyer, who left the house about 5:30 p.m. to go to Lansing, met her family at city hall after hearing about the evacuations.

The American Red Cross Mid-Michigan Chapter booked 11 rooms at the Quality Inn on East Lansing Road in Durand to accommodate the families that were evacuated, Disaster Action Team leader Kathi Ceresia said. She added the Red Cross would pay for the hotel stay, as well as food and beverages for the evacuated families.

Roddy said Thursday night residents might be able to return to their homes this morning, but she couldn’t be sure.

“They can’t predict that at this moment because the car that has overturned is still leaking, and they have not been able to stop that leak,” Roddy said. “Until they can stop the leak and contain any of the contaminants, they cannot allow any of the residents to return to their homes.”

Despite the circumstances, Roddy and Durand City Council member Brian Boggs said the situation was being handled well.

“I think it’s been handled very efficiently and effectively by the...hazmat team that’s come in from Canadian National,” Roddy said. “The coordination between the American Red Cross and the fire departments and then the cooperation with the city of Durand to effectively evacuate and house all of the victims has been very efficient.”

VERNON TWP. — Township officials are planning a public meeting to answer residents’ questions and, at the same time, they’re preparing a bill …

Canadian National Railway derailments and other accidents have been increasing in both the United States and Canada, to the point where transportation regulators are continuously issuing reports and warnings to CN. Often, derailments of CN trains occur numerous times in the same yard or stretch of mainline only weeks or months apart. Spills of toxic liquids associated with these derailments are also common, and have resulted in major fish kills and waterfowl deaths.