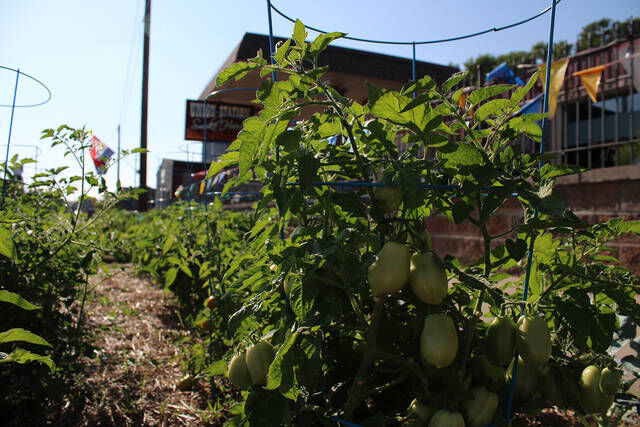 Tomatoes grow outside Union Station Smoke House in Durand as part of the city’s edible landscape. The fresh fruits and vegetables are free to all. 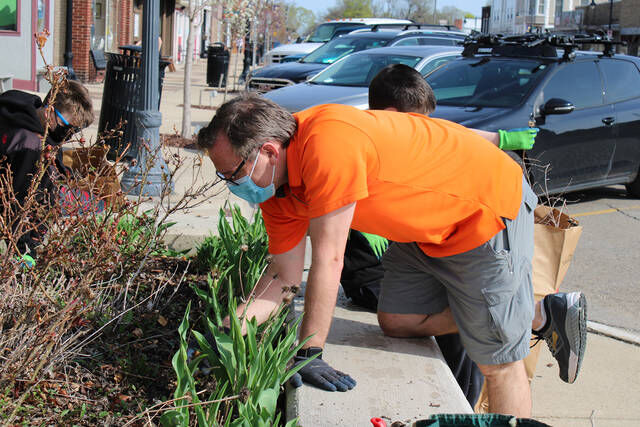 Tomatoes grow outside Union Station Smoke House in Durand as part of the city’s edible landscape. The fresh fruits and vegetables are free to all.

DURAND — Fresh fruit and vegetables are now free for the taking in several green spaces throughout downtown Durand, part of a city-driven initiative to eliminate food insecurity, strengthen community and attract more visitors to town.

Cucumbers, tomatoes, green beans, lettuce and strawberries are just a few of the fresh offerings that comprise the city’s edible landscape, planted this spring through a partnership between the city, the Greater Durand Area Chamber of Commerce and the Durand Downtown Development Authority.

“Our goal was to provide free food that was easily accessible to the community,” said Candyce Wolsfeld, executive director of the Greater Durand Chamber. “With harvest coming on, we hope everyone will take advantage of the gardens.”

Fruit and vegetables are scattered throughout the downtown, occupying flower beds along Saginaw Street and a berm in front of Union Station Smoke House, among other locations. Residents and visitors are encouraged to sample the fresh offerings and take home anything they please, and restaurants are also legally permitted to use the food, according to Michael Nazarian, who approached the city with the edible landscape idea in early April.

Nazarian, a Durand resident, sustainability advocate and author of “A Beginners Guide To Greening Your Life,” believes the edible landscape will help alleviate struggles with business retention, as well as foster a greener, healthier community in Durand. He’s tracked the program’s progress to date, indicating there are currently about 198 plants in the downtown.

By the end of the harvest season in October, Nazarian estimates the edible landscape will have produced more than 300 pounds of fresh fruit and vegetables for the community.

Funded entirely by the city and through donations, the edible landscape, Nazarian believes, is likely the first city-run free food program in the United States. He’s researched the topic at length, finding only community gardens run by small organizations.

Nazarian was motivated to implement an edible landscape to the Durand after learning of a similar ventures occurring in Europe. These days, he rarely goes for a walk downtown without seeing someone grabbing fruits and vegetables.

“It is better than an article. It is better than being on the news because that is it happening. When a kid walks over and grabs that, it happened,” Nazarian said. “It’s hard to explain, you’re just proud of the whole team because it’s happening, it’s becoming normal within the first season.”

Seeking to spruce things up, the city partnered with the Durand Downtown Development Authority (DDA) and Greater Durand Area Chamber of Commerce to form a beautification committee in April, enlisting local volunteers to clean up green spaces throughout the downtown.

Included in the plans was the implementation of an edible landscape. Jeff Brands, a Durand City Council member and longtime community volunteer, was tapped to lead the program.

Brands has been helping maintain the downtown — putting up Christmas lights, weeding flower beds and doing “anything else that needs to be done” — alongside a handful of other dedicated residents for more than a decade.

He currently spends about an hour each day watering the plants, plucking weeds whenever necessary. The beatification committee routinely cares for the edible landscape as well, with volunteers conducting community cleanups at least once a month.

“(The edible landscape) is helping other people, it’s getting people downtown,” Brands said. “I enjoy it, going down and working on this stuff. Call me crazy, but I don’t mind pulling weeds.”

The Chamber initially planned to put together a community pick event to draw attention to the availability of fresh fruits and vegetables downtown, but talk amongst area residents and business owners has already spread to the point where people are routinely plucking fresh offerings, Nazarian said. There have even been inquiries about the program from as far away as India and South Africa.

The Durand Parks and Recreation Board recently donated seven fruit trees to the effort, with two apple trees stationed behind the Sandula Clock Tower and two pear trees, two peach trees and an additional apple tree in the green space behind D-Railed Bar and Grill.

Nazarian intends to approach the city this fall with the idea of making the edible landscape a permanent fixture in Durand, with money set aside in the city’s budget to support the continued operation and expansion of the program.

While Nazarian remembers some residents expressing concerns surrounding the idea at the outset — including a few claiming all the homeless people in Michigan “would come to Durand for the free food” — there have been no issues with the program to date.

“We have this laundry list of horrible events that are supposed to happen,” he said. “So far, people just pick it and eat it.”

What a wonderful idea! I wish we could see edible landscapes in more small towns around this area. Can COVID money be used to establish the infrastructure for this?