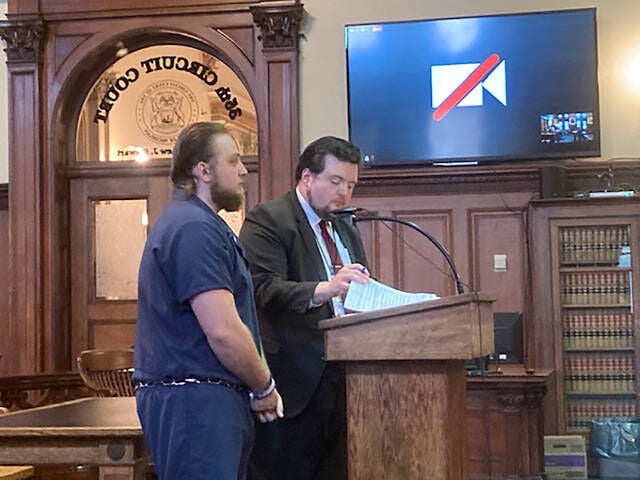 CORUNNA — A Laingsburg man Tuesday pleaded guilty to felony fleeing and eluding a police officer, as well as operating while intoxicated, and now faces a jail sentence.

Lance Wicks, 24, admitted in 35th Circuit Court to drinking a pint of Crown Royal Apple whiskey on Dec. 30, 2020, before driving his truck in downtown Laingsburg.

“I was operating a motor vehicle (inaudible),” Wicks said. “I was trying to lose (police). It didn’t go very well.”

He added that after a short chase in Laingsburg, he got out of his truck and tried to flee on foot.

“I stopped the vehicle, proceeded to run off and they tazed me,” he said.

After Wicks was caught, he had a 0.134 blood alcohol content. The legal limit in Michigan is 0.08 BAC.

In exchange for the plea to felony fleeing/eluding and misdemeanor OWI, prosecutors dismissed numerous other counts, including one felony fleeing/eluding charge, and misdemeanor counts of reckless driving, driving with a suspended license, no insurance, and operating an unregistered vehicle. Additionally, a habitual offender-fourth notice charge enhancement was dismissed.

According to Michigan Department of Corrections online records, Wicks has a drug possession conviction from 2018 in Clinton County.

Court records indicate he received a Holmes Youthful Training Act sentence for that conviction, but his probation was revoked in 2019 and he served 81 days in jail.

Wicks also stated at Tuesday’s hearing that he is currently on probation in Ingham County for a fleeing/eluding charge.