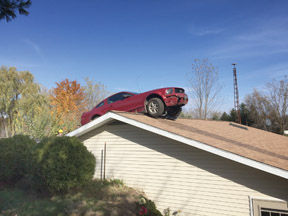 A Ford Mustang is seen perched atop Joyce Kingsley’s Woodhull Township home Monday afternoon. Police say the driver suffered a medical emergency while driving on I-69 and drove off the freeway before ending up on the home. 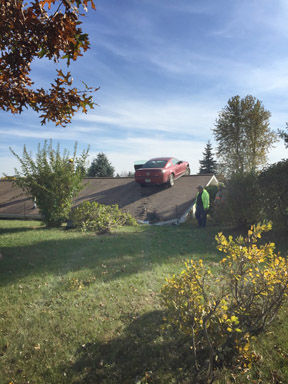 Tire tracks in the grass lead to Joyce Kingsley’s home where a Ford Mustang crashed into her roof. 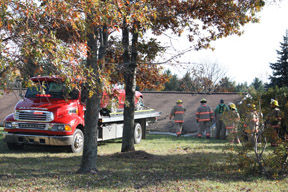 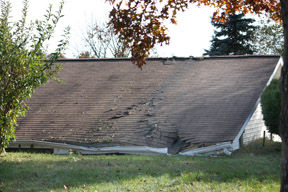 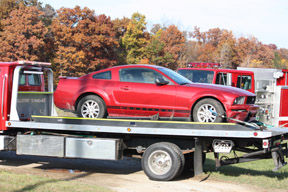 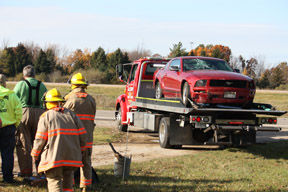 A Ford Mustang is seen perched atop Joyce Kingsley’s Woodhull Township home Monday afternoon. Police say the driver suffered a medical emergency while driving on I-69 and drove off the freeway before ending up on the home.

Tire tracks in the grass lead to Joyce Kingsley’s home where a Ford Mustang crashed into her roof.

WOODHULL TWP. — During the nearly 30 years Joyce Kingsley has lived at 7645 Lansing Road, only once has she heard a sound comparable to what she heard Monday afternoon — when a tornado roared through the area.

At about 3:15 p.m., the 83-year-old heard what she described as a “kaboom” rattle her walls and rushed outside.

There, she found a Ford Mustang perched on the roof of her house.

“I was just watching TV inside. I had it up pretty loud, but this was much louder,” Kingsley said. “I looked out back like normal ... and I didn’t see anything. I thought, there had to be something. So, I walked out the back entrance door and there’s the front of a car hanging off my roof.”

According to a press release issued by Michigan State Police, the driver of a Ford Mustang suffered a medical episode while driving east on I-69, causing him to lose control.

A family member identified the driver as Cameron Canute, a former mayor of Durand who resigned from the city council in 2011 due, in part, to health issues.

The car veered off the roadway at about 60 mph, went through a ditch and crossed Lansing Road, which runs parallel with the freeway, before entering Kingsley’s yard.

Canute, the lone occupant of the car, avoided several trees in the yard and finally struck the only home in the immediate area.

Kingsley’s home is built next to a hill with the roofline nearly level with the ground.

Before driving onto the roof, the Mustang was slowed by the lilac bushes Kingsley grows in her  yard.

“The driver is extremely lucky to have avoided the three large trees in the yard,” he said. “Had the vehicle been a few feet to the left or right, the driver could have been seriously injured.”

“It could’ve been a lot worse,” Kingsley agreed. “I’m glad everyone is all right.”

The home is still structurally sound and there were no injuries as a result of the incident. Canute, 57, was treated for a low blood sugar level and transported to Sparrow Health System in Lansing.

He was released shortly thereafter and is feeling better, according to family.

A gutter and shingles were broken on Kingsley’s roof, and there is a hole through the roof into the living space. She said she would have tarp placed on the roof until repairs can be made.

The Mustang was pulled off the roof by a tow truck and removed from the scene.