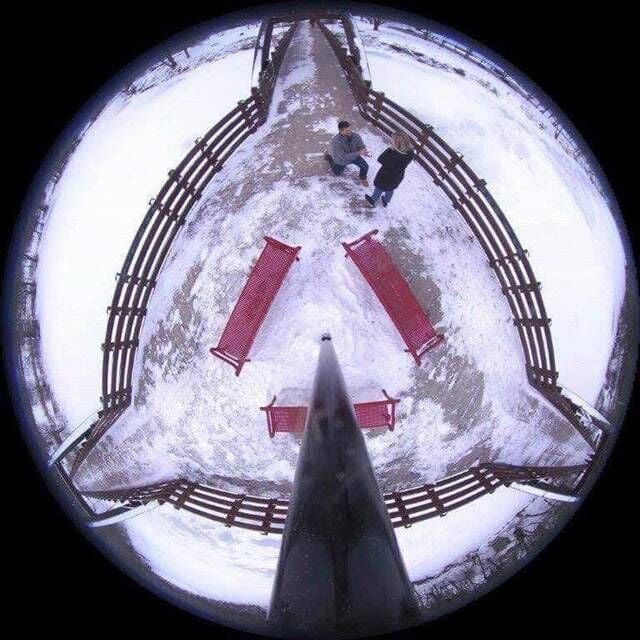 A screen capture from the city of Midland’s security footage from the Tridge shows the moment Aaron Gilbert popped the question to Hailey Andres. 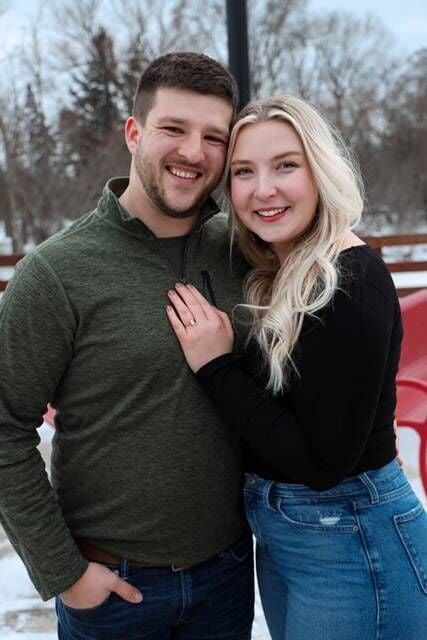 A screen capture from the city of Midland’s security footage from the Tridge shows the moment Aaron Gilbert popped the question to Hailey Andres.

MIDLAND — The frigid February air didn’t keep couple Hailey Andres and Aaron Gilbert from taking an after dinner walk along the famous Tridge earlier this month.

It was early evening on Feb. 6 and they had just enjoyed dinner at a restuarant called Molasses a few blocks away — just as they’d done on their first date about a year and a half ago.

For the couple who met online, Midland became a mid-way point for them to meet and make memories together.

So, also like on their first date, the couple decided to take a walk on the Tridge, despite the cold, cloudy weather. Andres, a New Lothrop native, assumed it was just a typical walk on the downtown landmark; however, Gilbert, an Alma native who still lives in the city, had something special planned.

When they reached the middle of the Tridge, standing above the rushing water where the Chippewa and Tittabawassee Rivers flow together, Gilbert got down on one knee and proposed: “Will you marry me?”

“I wondered (about a proposal) but I didn’t want to say anything; I didn’t want to bring anything up — but I was still totally shocked in the moment when it happened,” Andres said. “I couldn’t believe what was happening.”

When Gilbert bought the engagement ring in November 2020, he started to plan the proposal, which started with asking Andres’ parents — in person — for each of their blessing to marry their daughter. Gilbert also got Andres’ brother in on the plan and asked him to take photos of the special moment.

The day of the proposal, the couple started with a manicure appointment in Shields. Gilbert said he wanted Andres’ nails to be freshly painted when he presented her the new engagement ring.

Gilbert said, naturally he was a little nervous prior to asking. He murmured about the ice to stall for time and waited to feel his watch buzz with a text from Andres’ brother.

“You’ve seen videos of dropping the ring and stuff, so I was like checking the surroundings, making sure there was nowhere the ring could fall through,” he said.

After the proposal, Gilbert arranged for the couple to stop by and visit their grandparents to share the news, before heading home where their parents waited.

“It was perfect,” Andres said.

Andres had noticed a security camera positioned in the middle of the Tridge and wondered whether they could see a recap of their proposal. She reached out to the city which provided her with a captured photo of the couple’s special moment.

The city of Midland shared the post to the city’s Facebook page and, based on the comments, the Tridge has seen its fair share of proposals over the years.

“I run social media, so it was great to see that the (Facebook) post was bringing joy to a lot of people,” Andres said. “You know, something as simple as a moment in our lives but it was really impacting a lot of local community members.”