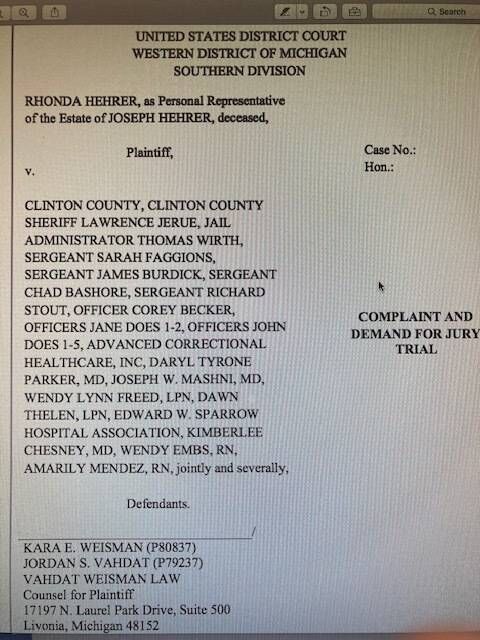 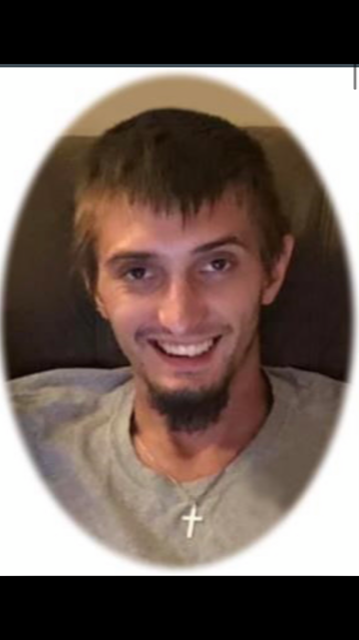 GRAND RAPIDS — The parents of a 26-year-old Ovid man who died at a Lansing hospital in March 2019 have filed a federal wrongful death lawsuit against Clinton County officials seeking at least $75,000 in damages, claiming they failed to provide adequate care when he became ill as an inmate in the Clinton County Jail.

According to the suit filed Monday in United States District Court Western District of Michigan by the Vahdat Weisman Law Firm of Livonia on behalf of Rhonda Hehrer, Joseph Hehrer was sick for days while an inmate and officials did not transfer him to a facility to receive medical care. Clinton County Jail employees, nurses and doctors had “subjective, objective, and/or actual knowledge of Hehrer’s deteriorating health condition and continuously showed substantial disregard to his condition,” the suit claims. Hehrer later died of diabetic ketoacidosis.

“We’ve been investigating 26-year-old Joseph Hehrer’s tragic, preventable death for over a year,” Kara Weisman, attorney for the Hehrer family, said in an email. “The complaint filed Monday is a result of that work, and the evidence gathered to date will support the claims therein. The circumstances surrounding Mr. Hehrer’s death were unconscionable and those responsible for it will be held accountable. The eventual 911 call is just one example of the deliberate indifference shown towards Mr. Hehrer’s well-being while in the care and custody of the Clinton County Jail. The investigation now enters the litigation phase, and the claims will proceed until Mr. Hehrer and his family receive the justice they deserve.”

No further proceedings have been scheduled in the case. The county has not yet filed a response to the lawsuit.

“At the direction of legal counsel we have no comment at this time regarding the pending lawsuit,” Jerue said in an email.

According to the suit, Hehrer was arrested Jan. 23, 2019, by Clinton County sheriff’s deputies for a second-offense OWI (presence of drugs) and probation violation related to a Jan. 18, 2019, car crash on East Colony and North Chandler roads. Following that crash, Hehrer’s breathing was “labored and shallow.” Hehrer was intubated and transferred to Sparrow Health System in Lansing, where he was evaluated for traumatic injuries and given intravenous fluids. His condition improved, and tests showed elevated glucose levels.

Hehrer was denied bond in the case because he was on probation for a prior OWI and he was lodged in the jail. According to the lawsuit, he began exhibiting signs of illness March 4, 2019, and “not being able to hold food down.”

Hehrer submitted a sick call request to jail staff March 5, 2019, complaining of “fever, queasiness, headaches in and out, heartburn constantly throughout the day; have puked a couple times.”

On March 6, 2019, Hehrer was moved from “M Dorm” to “receiving 4, 3” for medical observation. His temperature at that time was 96.2 degrees and he weighed 114.2 pounds. At that point, Hehrer had been vomiting for four days and, the suit claims, his body temperature was less than 1 degree from being hypothermic. Hehrer was returned to “M Dorm” at 8:36 p.m.

After being returned to general population, the lawsuit claims, “multiple inmates showed concern for Mr. Hehrer and checked on him throughout the day” on March 7, 2019. Other inmates were allegedly shown “multiple quarter-sized blisters on his back that had the presence of pus” and “deep yellow bruises on his body.” Hehrer was again moved to receiving and placed under observation.

Over the next several days, Hehrer was housed in the receiving area of the jail, where he vomited blood and refused food numerous times, the suit claims.

“At 1:17 p.m. March 8, blatant disregard for Mr. Hehrer’s deteriorating health is further shown as defendant officer John Doe, who is aware of Mr. Hehrer’s declining condition, was observed spinning around in his chair, clearly unconcerned about Mr. Hehrer or any other Clinton County Jail Inmates,” the lawsuit claims.

A nurse, who is also named as a defendant in the suit, ordered continued observation of Hehrer.

The lawsuit claims another inmate was placed into the same cell as Hehrer March 8, and attempted to get help, but was told staff “already knew because he had been sick for a few days and the (staff) did not care.” Several other inmates voiced their concern to jail staff and nurses, according to the lawsuit. Hehrer’s family attempted to visit him March 8, which was his birthday, but was not allowed a visit since Hehrer was sick.

The morning of March 9, Hehrer’s cellmate attempted to get the attention of a guard, but the guard “was busy lounging in his chair and on his cellphone,” according to the lawsuit.

Guards placed a call to 911 shortly after 9 a.m. March 9, and a nurse told central dispatch “Mr. Hehrer had ‘dark brown vomit, jaundice, not eating, not urinating, no bowel movements, can’t get up, (Mr. Hehrer could) hardly swallow, choke’ and she further stated that Mr. Hehrer was ‘really in trouble and he’s thrown up a lot.’”

The lawsuit claims a guard “laughed at the situation when central dispatch asked if Mr. Hehrer was completely alert by responding, ‘no, hehehe, no.’”

Hehrer was eventually transported to Sparrow, where his glucose level was 1,117, his blood pressure was 60/30 and his body temperature was 93.6 degrees.

He was ultimately diagnosed with diabetic ketoacidosis and septic shock, and was admitted to the critical care unit.

A March 14, 2019, autopsy concluded Hehrer’s cause of death was the result of “multisystem organ dysfunction due to diabetic ketoacidosis.”

Absolutely preventable and this department should be ashamed of their behavior, or lack thereof

100% preventable...if only the system would have cared, and acted promptly. All involved should be held accountable.

Should the U.S. completely pull its troops from Afghanistan