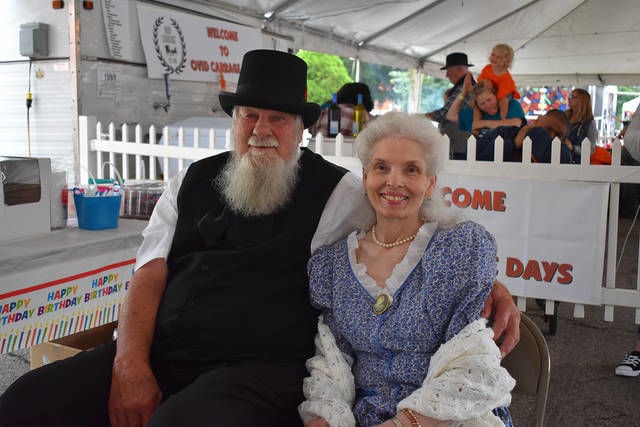 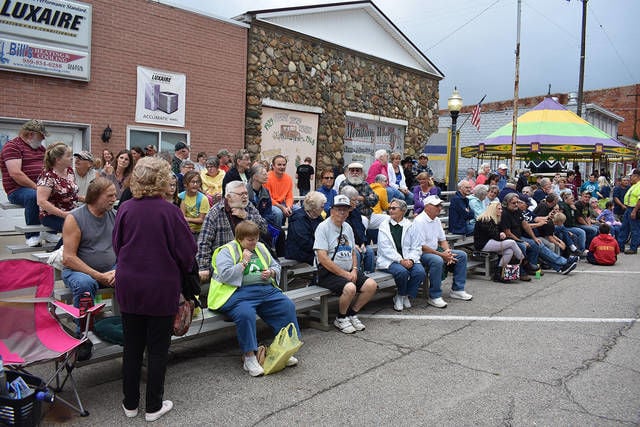 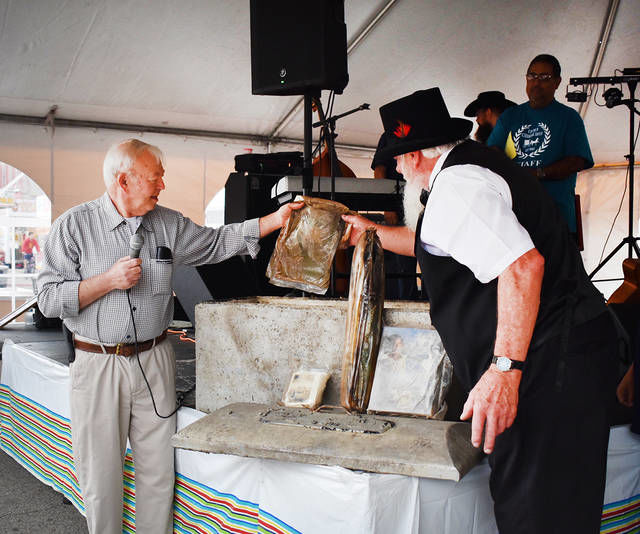 OVID — Ovid Mayor Bill Lasher pulled an item out of a 1969 time capsule and declared it was that period’s Amazon.

The item? A Sears-Roebuck catalog. That and other relics, including newspapers, photographs and an Ovid-Elsie banner, were revealed during Friday’s opening ceremonies of Ovid Carriage Days, which is being combined with the celebration of Ovid’s 150th “birthday.”

“We’re very well pleased on the city’s behalf to welcome you to Carriage Days and celebrate our 150th anniversary,” Lasher said to the large crowd just before he and parade marshal Wells Monroe opened the time capsule, a metal chest that had been unearthed earlier.

Many of the items were wrapped, and the mayor left them in that condition, saying members of the local historical society would unwrap them later and decide how best to display them.

It is possible that some of the artifacts did not survive 50 years under the ground: At one point, Monroe pulled out a sealed plastic bag that appeared to be filled with brown liquid and nothing else, he said.

Melissa Lee kicked off the ceremonies with a rendition of the National Anthem. Members of the Ovid VFW Post 8964 performed as a color guard.

Monroe and his wife, Sue Monroe, were introduced as this year’s parade marshals.

“I wish to invite all of you to the doings this evening,” Wells Monroe said, referring to the midway, craft stands and other activities all along Main Street. “My wife and I are really surprised to be chosen as parade marshals, and we appreciate it. It’s been a long time, living here in Ovid.

“This community has been a great community for young adults to bring up their families,” he continued. “It’s a welcoming community — it’s easy to make the acquaintance of the people in town.

“It’s been 50 years since we put that time capsule in the ground. At the time, my wife and I had purchased a home in town. Our children were all under 6 years old. Now, they’re in the world on their own and I can’t say how proud I am of them. I think it’s because they grew up in this small community.”

State Rep. Graham Filler, R-DeWitt, presented Lasher with a framed tribute to Ovid and congratulated residents on achieving the milestone.

Longtime residents Nancy Behrens and Margo Martin came to the opening ceremonies. Martin said she was an attendee in 1969, when Ovid was celebrating 100 years and the time capsule was buried.

“The 100th birthday was very elaborate,” she said. “Everybody dressed up and had a good time. This is low-key, and everybody will participate. Carriage Days brings everybody out. We get to see people we don’t see very often.”

Behrens said she comes to Carriage Days every year because she loves her community.

“I enjoy Ovid,” she said. “I wouldn’t want to live anywhere else. You know a lot of people, and it’s a good place to raise kids.”

The festival winds up today with an all-day car show and a duck race at 1 p.m.