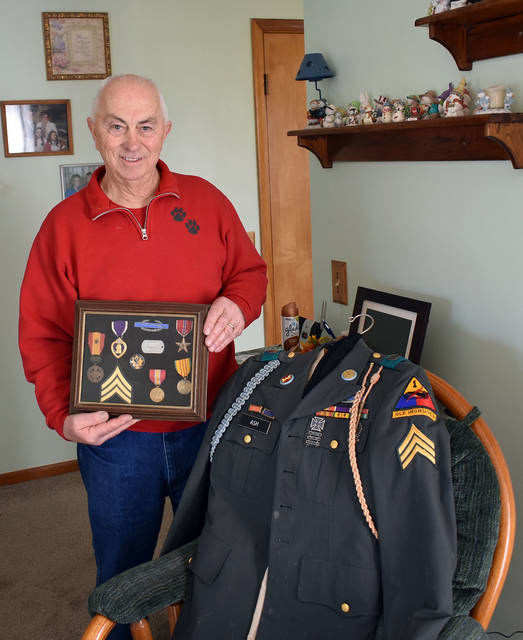 Vietnam veteran Arthur Ash of Caledonia Township stands in his home holding a frame containing his war medals, including a Purple Heart, next to his Army uniform. 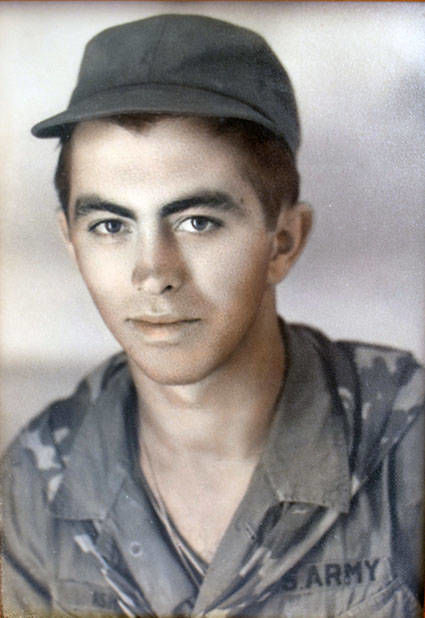 CALEDONIA TWP. — When Arthur Ash got drafted into the U.S. Army in 1966, he was prepared to fight in Vietnam, even though it would take him away from his bride of two years and a good job at Chevrolet.

What the Owosso native didn’t know was that before completing his tour of duty in ’Nam he would be shot by the Viet Cong and come close to dying from malaria.

But that probably wouldn’t have changed his attitude.

“I figured it was my duty to go. Everybody should serve their country in some way,” Ash, 75, said during a conversation Tuesday at the home he shares with his wife of 55 years, Patricia Jean (Adams) Ash.

In Vietnam, Arthur Ash led patrols through jungles, searching out the enemy before the enemy could search out and destroy him and his fellow soldiers in the 1st Division, 28th Infantry (the Black Lions).

Despite the horrors he confronted almost constantly, Ash made sure to find the time to write a letter to his wife every single day.

She was two months pregnant when he left for Southeast Asia in April 1967. After their daughter Julie was born, Patricia Ash had to deal with the baby’s colic — which lasted six months — without her husband’s help and under the watchful eyes of her protective parents, with whom she had moved in.

But she realized his situation was a lot more dire than hers.

Both of them had grown up in the Owosso/Corunna area, and gotten to know each other while attending Bennington School as kids. They didn’t much like each other for a long time, but then he asked her out and treated her like a queen on their first date.

They fell for each other and were married Sept. 4, 1964. She worked at A.J. Redmond in Owosso, and he snagged a job at General Motors. Life sailed by smoothly for a time, and then came the draft notice they both had an inkling he would get, given that the Vietnam War was gearing up.

Arthur Ash did his basic training at Fort Knox, Kentucky. When he was sent for advanced individual training in Fort Polk, Louisiana, he no longer doubted he’d be sent to Vietnam: The sign in front said the facility was for infantrymen going to Vietnam.

He came home for 30 days and then shipped out to Vietnam, flying in typical haphazard Army fashion from Detroit to New Jersey to Alaska to the Philippines to Tan Son Nhut Air Base in South Vietnam, a 24-hour trip.

Then he moved on to a base camp in the province of Vinh Phuc, an hour by air from Saigon (now Ho Chi Minh City). Ash was a rifleman, “the worst job you could have,” but said he was well taken care of by his division, which served him hot food at least once a day, and supplied clean clothing and whatever else the men needed.

Turning 23 the month he arrived, Ash was called “old man” by his 18- and 19-year-old counterparts, but “the old man could beat ’em at everything but running,” Ash said, noting he lacked the long legs of a runner.

He was part of the patrols that protected the perimeter of the camp, which included a landing strip for big military planes with astonishingly loud turboprop engines. Often he and his men had to patrol well beyond the perimeter, staying in mini-camps from which they worked sometimes for weeks at a time.

“Our patrol made sure the enemy wasn’t setting up in there,” Ash said. “We took no prisoners. It was search and destroy.”

Naturally, when bullets flew everywhere, he was scared at first. But then he observed that many soldiers were making it through their one-year tour of duty alive, and it gave him hope that he would also survive.

He said he learned from more seasoned soldiers the best survival strategies, such as how to locate booby traps, trip wires and explosive devices.

Viet Cong soldiers — members of a guerrilla army supporting the North — often would lie in wait in “spider holes.” Ash and the others learned to shoot down at the holes and just keep moving.

They learned that if you smelled marijuana, you were about to get attacked, as Viet Cong soldiers would smoke pot in order to gear up for battle.

“You had to learn or you wouldn’t be making it,” he said. “What I learned kept me alive.”

But it couldn’t prevent him from being injured. One day on patrol, Ash headed up one of three lines of soldiers, cutting through bamboo trees in the jungle so the men could pass through.

He couldn’t hold a gun and cut trees at the same time. Shots rang out and a bullet tore straight through his lower right leg.

He knew his leg was hurt but didn’t know how badly.

“I didn’t even want to look down,” Ash said. “My foot might not have been there.”

Injured soldiers were flown out in helicopters. Ash told his sergeant he’d been shot but word didn’t get to a chopper.

The troops cleared out, “blasting the daylights out of” their attackers as they left, and headed back to the spot where their foxholes and sandbags were.

Ash was among them. He walked for about 3 miles on his injured leg, which fortunately didn’t bleed badly, he said.

Medics at a field hospital had to cut away the gangrene that had set in, but Ash was lucky: The bullet missed blood vessels and bones.

“I started thinking about God a lot when I was there,” said Ash, now an active member of Immanuel Baptist Church in Corunna.

Sometime later, the field doctors thought Ash had malaria, as he was shivering with chills and had a fever that shot up as high as 106 degrees. As miserable as he was, the remedy was far more painful.

“They laid me on a rubber cot, naked, and poured ice water over me,” he remembered. “Then they rubbed me with a block of ice.”

By then, Ash had had enough of Vietnam. Enough of the gun battles. Enough of destroying villages, whose residents were warned in advance the soldiers were coming.

Enough of the mud huts, the lack of sewers, the stench everywhere. On the upside, Ash and the soldiers would save their C Rations and give them to appreciative villagers.

“I wanted to come home,” Ash said. “Being there made me appreciate what we have here in the U.S.”

Just a few days shy of a year in Vietnam, the E-5 sergeant returned to Fort Hood in April 1968. He worked as a dispatcher for an armored division until he finally came home for good.

In addition to his Purple Heart, Ash earned three bronze stars (two marked with a “V” for valor), the Vietnamese Cross of Gallantry and other military honors.

He saw daughter Julie for the first time when she was 6 months old. Patricia Ash remembered meeting her husband at Detroit Metro Airport, and the two of them grabbing each other and hanging on tight.

Ash joined the Owosso VFW Post and belongs to the Military Order of the Purple Heart. GM saved his job and kept his seniority building while Ash served in the military. He retired from GM in 1998 after 36 years.

However, Ash hasn’t stopped working. A self-confessed workaholic, he has taken gigs at Walmart, H&R Block, worked maintenance for an apartment complex, was a U.S. Census leader in 2000, and still drives a bus part-time for Owosso Public Schools. He also drives a bus and volunteers in many other ways for his church.

He still occasionally talks about Vietnam, and how lucky he was to come home. His wife always felt sure he would.

“I believed he would come home and not be hurt,” Patricia Ash said.

“I made it through,” Arthur Ash said. “And I’ve never stopped appreciating everything we have here in this country.”