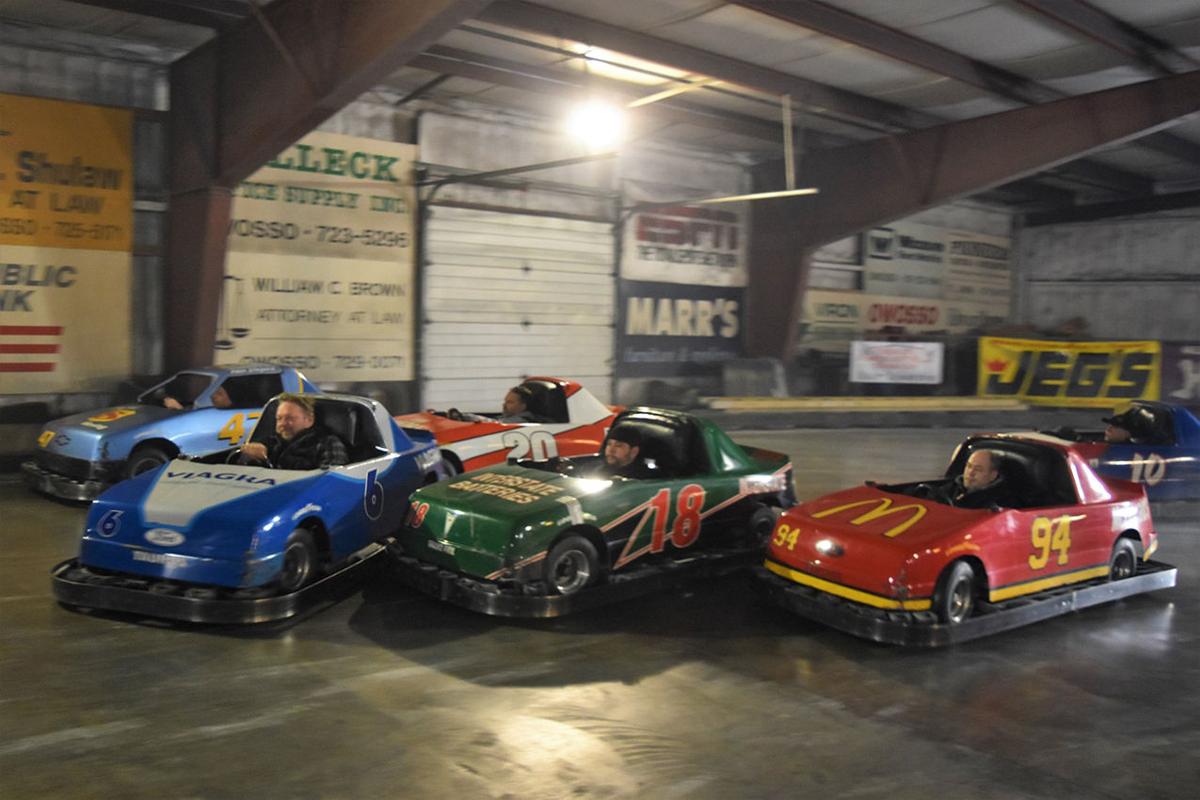 Seen in this Saturday photo are go karts in action at the Racing for Miracles event, which raised $5,000 for Flint's Hurley Children's Clinic. 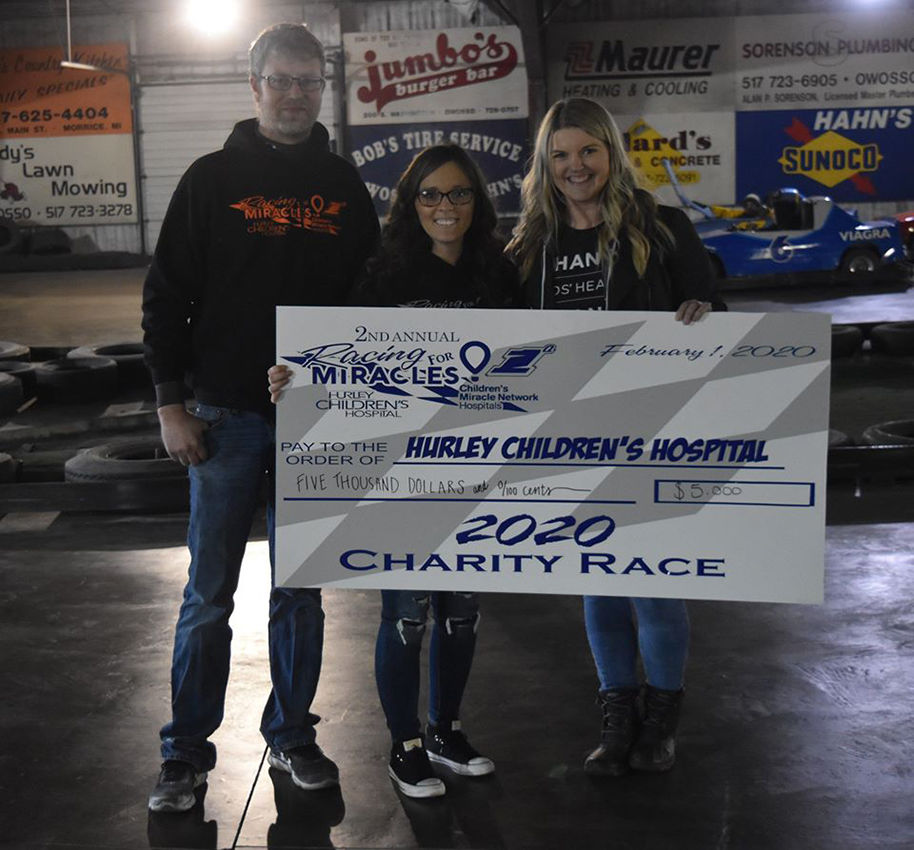 Seen in this Saturday photo, from left, are Scott and Sarah Quaal, as they present a check to  Hurley representative Brooklyn Sondgeroth. 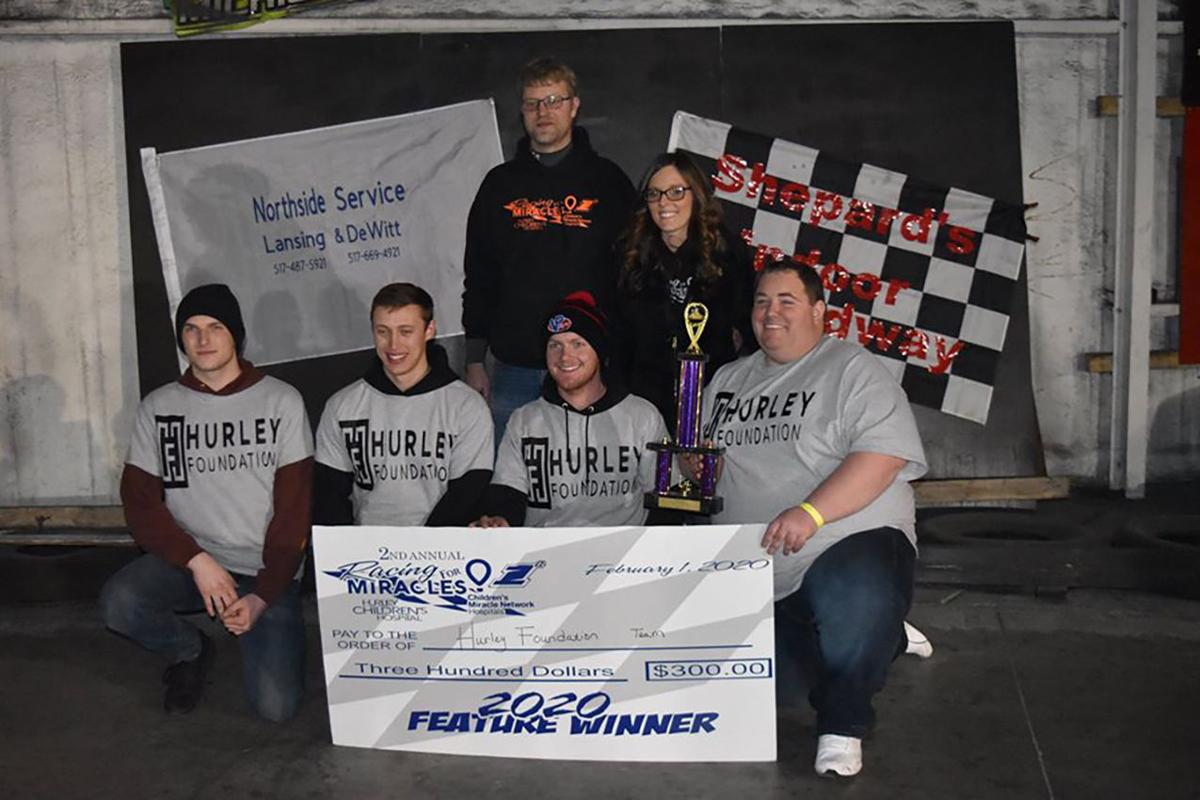 Seen in this Saturday photo are, first row, from left, Blake Rowe, Kyle Crump, Curtis Spencer and Dale Spencer. In the back, from left, are Scott and Sarah Quall.

Seen in this Saturday photo are go karts in action at the Racing for Miracles event, which raised $5,000 for Flint's Hurley Children's Clinic.

Seen in this Saturday photo, from left, are Scott and Sarah Quaal, as they present a check to  Hurley representative Brooklyn Sondgeroth.

Seen in this Saturday photo are, first row, from left, Blake Rowe, Kyle Crump, Curtis Spencer and Dale Spencer. In the back, from left, are Scott and Sarah Quall.

Sarah Quall is one of the event’s organizers, and her husband Scott races at Owosso Speedway in the modified class. Sarah also works for Hurley, which helped to get the eight-race event off the ground in 2019.

“This is our second annual event,” Sarah Quall said. “We raised $5,000 last year and $5,000 this year. The community coming together in the way it has, we’ve been able to raise $10,000 over the last two years. Dale Spencer helps us put on the event and it’s great.”

The Qualls, of Bridgeport, began last year, at first by selling t-shirts and fundraising in order to assist Hurley with funding when Hurley was waiting to receive grant money from the state for their art program.

Along with the Qualls, Ovid native Dale Spencer was one of the two teams that originally came up with the idea of holding the races to raise money for charity.

“I’ve been racing since I was five years old. I started out in a junior dragster. We were talking one night about how to put a race for charity, and I said, ‘How better than to put something together with kids, where everyone can have fun?’” Spencer said. “So we did it last year in 2019, for the first time, and it came together really well.”

The races drew 24 teams of four racers, along with a large crew of volunteers to help out with all aspects of the races, including concessions, officiating, safety and mechanical problems. About 300 people were in attendance for the races, including several representatives from Hurley.

In addition to the races, other activities took place, including silent auctions, raffles and 50/50 drawings. “We plan on continuing the event every year and will do so until the facility can no longer hold it,” Spencer added. “We’ll be there for the foreseeable future.”

Sarah Quall said she’s pleased with the turnout for the event, and said organizers would love to do a bigger race, but “that’s in time.”

In addition to the $5,000 raised this year, Spencer said the event has also drawn donations after the event, so the total will end up being even more.

“It’s pretty cool just getting everybody together to raise funds for a good cause,” Sarah Quall said. “Our first year, we were like if we raise $500 or $1,000, we’ll be happy.”

Hurley Assistant Director for Children’s Miracle Network Programs Brooklyn Sondgeroth said the event was a success and she was thankful for the Qualls and Spencer’s work.

“The second annual Racing for Miracles event benefiting child life music programs at Hurley Children’s Hospital was a huge success,” Sondgeroth wrote in an email. “The initiative, organization and enthusiasm from the Quaals’ Racing team has impressed me since day one. Scott, Sarah and Dale have made such a big difference in the lives of local children by hosting this event for the past two years, and all of us at Hurley Children’s Hospital are so grateful. This year marks our 30th year as a Children’s Miracle Network hospital, and we couldn’t think of a better way to kick it off.”

For information on how to participate or volunteer for next year’s event, visit the Racing for Miracles, Spencer Racing and Scott Quall Racing Facebook pages.