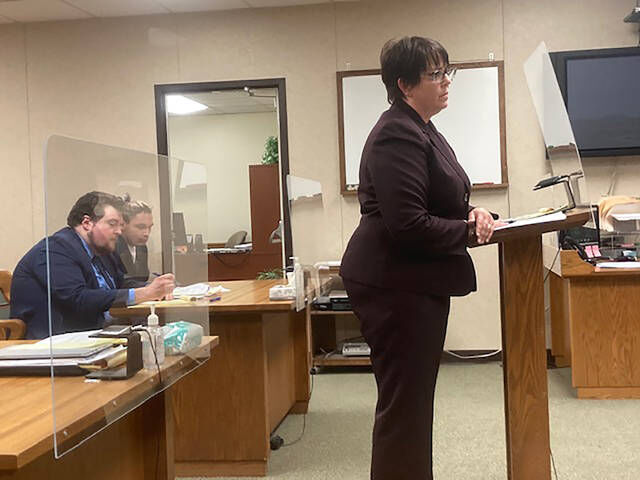 Morgan Huggins, background, is shown during a preliminary hearing Tuesday in 66th District Court in Corunna. 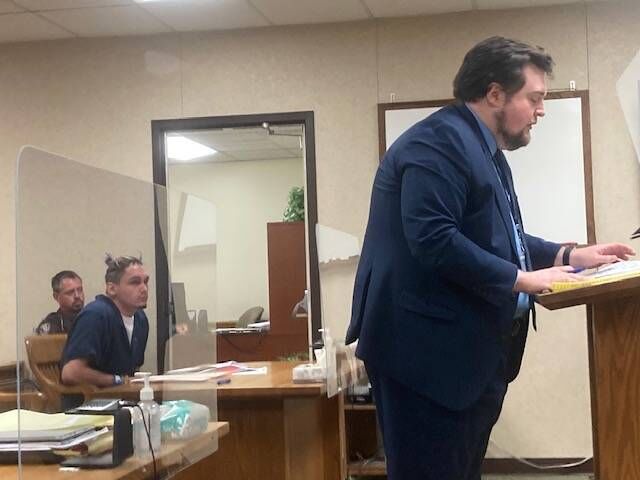 Morgan Huggins, seated at table, is shown during a preliminary hearing Tuesday in 66th District Court in Corunna.

Morgan Huggins, background, is shown during a preliminary hearing Tuesday in 66th District Court in Corunna.

Morgan Huggins, seated at table, is shown during a preliminary hearing Tuesday in 66th District Court in Corunna.

CORUNNA — An Owosso man accused of kidnapping, tying up, and repeatedly raping and beating his ex-girlfriend was bound over for trial, following a hearing Tuesday in 66th District Court at which shocking details of the alleged crimes were revealed by the woman.

Morgan Huggins, 21, was already charged with numerous felonies for the incidents, including first-degree criminal sexual conduct, assault with intent to do great bodily harm (strangulation), assault with a dangerous weapon, kidnapping, interfering with an electronic communications device, and two misdemeanor counts of malicious destruction of property for allegedly holding his ex-girlfriend captive, tying her up, and raping and beating her. The Argus-Press does not typically identify victims of sexual assault.

Tuesday, during a preliminary exam, the alleged victim testified she had dated Huggins “on and off” for about four months before the incident. Over the course of several days in June, she said, Huggins subjected her to “torture” by tying her hands and feet behind her back and physically and sexually assaulting her.

She added Huggins had taken her phone before the assaults, but eventually gave it back to her so she could attend a doctor’s appointment.

“I was afraid to go home,” the victim said. “He hit me, punched me, used a bat, and stomped on my ribs. He just went insane. He just attacked me… He pulled my hair so much, it was a mangled ball. I ended up having to get it chopped up…

“Morgan was drinking and went insane again,” she said. “That’s when he took me to the bedroom… He put a collar on me, choked me out, and raped me… I told him, ‘I don’t want to have sex with you. I do not consent to this again.’ He said he did not care, that it was his and he was going to take it and do whatever he wanted.”

The victim contacted Michigan State Police and reported the attack. MSP troopers arrested Huggins at the woman’s residence after he attempted to flee through a window of the home.

After the woman’s testimony, Judge Ward Clarkson granted Assistant Prosecutor Nicole Robertson’s request to add felony charges of CSC-1 and resisting/obstructing a police officer. In Michigan, CSC-1 is punishable by up to life in prison.

Clarkson also increased Huggins’ bail to $200,000, and suggested Huggins not be granted phone privileges while lodged at the jail, due to him allegedly telling other inmates the victim’s home address and that she would “get jumped,” or physically assaulted by acquaintances of his.

Huggins has a history of violent crimes.

In 2017, Huggins was charged with felony resisting/obstructing and misdemeanor domestic violence and minor in possession of alcohol. Court records indicate he pleaded guilty to a reduced felony resisting/obstructing charge and the balance of charges were dismissed. He was sentenced to probation, but violated the terms in 2018 and did not appear for subsequent court dates, and was terminated from probation without improvement July 2.