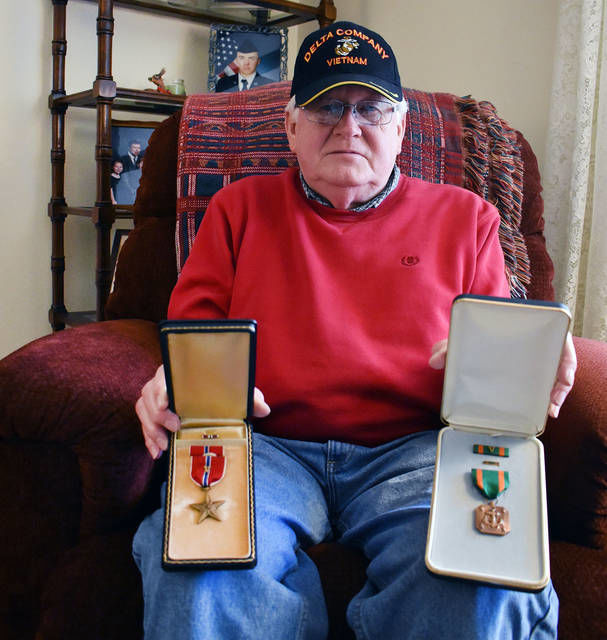 David Bailey, a former U.S. Navy corpsman, is shown inside his Owosso Township home with two of the awards he earned during the Vietnam War, a Bronze Star and Navy Achievement Medal. 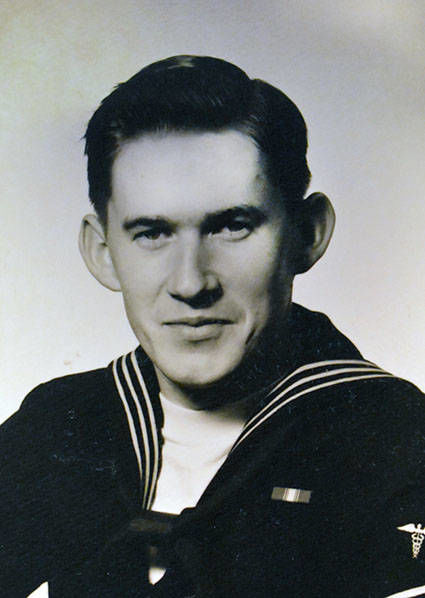 OWOSSO TWP. — A half a century ago, U.S. Navy corpsman David Bailey was moving through a field in Vietnam with a Marines ambush patrol when enemy forces turned the tables on the Americans, ambushing them instead.

“All of a sudden, all hell broke loose,” Bailey, 74, remembered during a recent talk at his home.

It was Feb. 16, 1969, and the bullets were spraying everywhere as the men scrambled to drop and take cover. Standing up meant instant death.

Next thing Bailey knew, command officers were calling for him to hustle up front. They needed a corpsman, who provided medical treatment and supplies in the field, up where the shooting was the most intense and men lay injured, dying or dead.

Never any question about what Bailey was going to do: He was going up front. If he died in the process, well, that’s what happened.

The machine gunner Bailey was with offered him cover fire.

“Keep your head low and I’m going to blast right over it,” the gunner told him.

Bailey bent down and ran, sloshing through deep mud. Making it to the front felt like a miracle. He and another corpsmen treated injuries as quickly and carefully as they could.

Saving their comrades wasn’t always possible. Bailey remembers a Marine lying on the ground whose wounds were so extensive, no treatment was going to keep him alive.

“Doc, just get me my Bible and lay it on my chest,” the Marine said to Bailey, who did as he was asked, then spoke quietly and reassuringly to him. A while later, the soldier died.

Bailey’s squad leader didn’t make it out of the ambush alive, either. By time the shooting stopped, six soldiers were injured and another six were dead.

Somehow, Bailey was among those who survived.

“Somebody back home must have been praying for me,” he said. “That was my deadliest time in Vietnam.”

Bailey won the Bronze Star for his courageous actions that day, and the Navy Achievement Medal for exemplary performance of his duties on Feb. 16 and many other occasions that were nearly as dangerous.

His Bronze Star citation praises Bailey’s “heroic achievement,” stating in part: “Hearing calls for assistance, Petty Officer Bailey unhesitatingly commenced maneuvering across the fire-swept terrain to aid the wounded. Disregarding his own safety, he fearlessly entered a rice paddy which was dangerously exposed to the intense enemy fire and, despite knee-deep mud and water, resolutely continued to advance until he had reached the location of three wounded Marines.

“Ignoring the enemy rounds impacting near him, he skillfully administered first aid to his injured comrades and calmly encouraged them.”

“It was my job,” Bailey said. “I have the benefit of knowing I was there and contributed in a positive manner.”

He had come a long way from his first firefight, when he “and the ground never got closer in my life,” he said with a chuckle.

Bailey learned to play it smart, following the advice of more experienced soldiers on how to stay safe. But all the words of wisdom in the world couldn’t save you if your number was up.

One of his squad leaders, Raymond Wellington Blandin, was killed Jan. 5, 1969.

Bailey and Blandin had had a lot in common, attending the same church, and became friends. Bailey also respected Blandin as a squad leader.

“When he died, that was the first and last tear I shed (in Vietnam),” Bailey said. “I turned cold. I guess that’s survival: You put your feelings on hold.”

Bailey had arrived in South Vietnam at the end of 1968, and was assigned to Company D, First Battalion, Seventh Marines, First Marine Division. The base camp was near Da Nang, where the airport was constantly launching massive airstrikes.

His job was to serve as a corpsman with the Marines as they set up ambushes for the North Vietnamese Army and Viet Cong.

Up to that point, Bailey, having enlisted in the Navy in 1965, had sailed the Pacific Ocean on ships but hadn’t landed in Vietnam. He had almost allowed himself to believe his four-year hitch would be combat-free.

Now, here he was, in the thick of everything.

“I was more scared now,” he said. “I thought, ‘We’re carrying real guns with real bullets. This is serious.’ You begin to realize you’ve enjoyed life until now.”

He was also struck by how many 19- and 20-year-old soldiers were getting killed all around him. He had been 19 when he’d enlisted. They were boys given a man’s job to do, and were dying before they’d had a chance to live.

Bailey had been born in Detroit, but by age 7 his family had moved to Owosso, where he graduated from high school in 1964. He worked a couple of jobs but felt he needed to find a direction and step out on his own, so the following year he enlisted in the Navy.

Next he was assigned to the USS Rehoboth, from which sailors were laying anti-submarine listening cables across the Pacific. It was supposed to be a secret mission, but it seemed everybody and their brother knew about it, Bailey said.

In 1967, he moved to the USS Maury, a survey ship that was sailing in the general vicinity of Vietnam, looking at how to invade that country by sea should it become necessary.

On one excursion from Japan to Hawaii, a storm rose up that caused the boat to list in excess of 45 degrees and lose power for six hours. Bailey was what the Navy called a “non-qualified swimmer,” meaning he couldn’t swim, but he remained calm.

“If the ship’s going down, I’m going down,” he remembered thinking. “I believe in God. I had a certain amount of fear but at the same time, I had peace.”

In August-September 1968, Bailey was sent to a field medical school in San Diego, which is how he knew he was about to ship off to Vietnam. His tour of duty ended in October 1969, the same time his four-year hitch was over.

Some months after he came home to Owosso, he married Rosemary Dennis, a local girl he’d met in 1966 while home on leave.

She called her son and told him to put on his uniform and get up to the hospital. She had someone she wanted to introduce him to.

“I guess you could say my mother chose my wife,” Bailey said. “I knew in an instant I was going to marry her.”

Dennis thought Bailey was “awesome.” She told him he’d better make it back in one piece.

The pair exchanged letters for three years, and after he came home he proposed. The couple have two adult children, six grandchildren and two great-grandchildren.

Bailey worked 34 years for the U.S. Post Office in Lansing as a clerk and manager. He’s a life member of the Owosso VFW, and belongs to the Marine Corps League and the Owosso American Legion.

Not a day goes by, he said, that he doesn’t think about Vietnam.

“I’m glad I did it,” Bailey said. “I know people I helped in Vietnam were very grateful. They didn’t have to tell me thank you, you could see it on their face.”