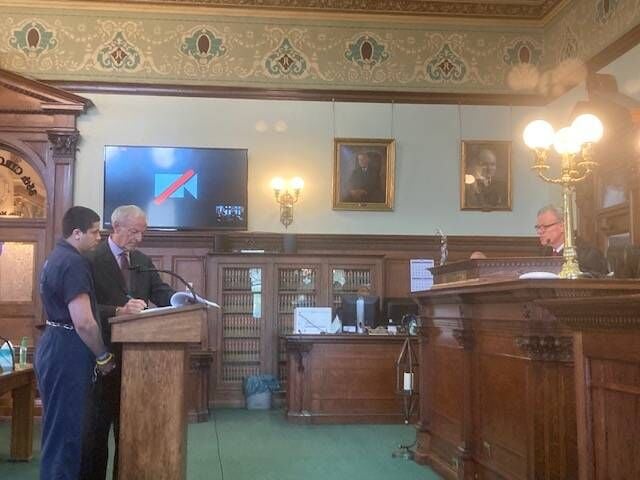 Aaron Renderos, at left, is shown during a plea hearing Wednesday morning in 35th Circuit Court in Corunna. 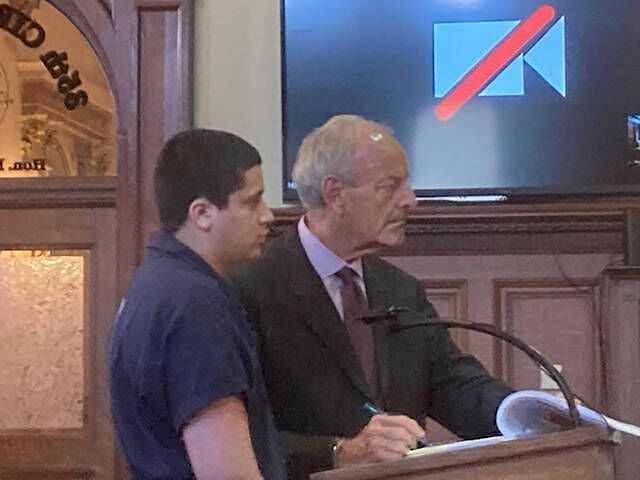 Aaron Renderos, at left, is shown during a plea hearing Wednesday morning in 35th Circuit Court in Corunna.

CORUNNA — A Lansing man pleaded guilty Wednesday to robbing another man of nearly a pound of marijuana with a BB gun, and now faces a prison sentence.

Aron Renderos, 19, told 35th Circuit Court Judge Matthew Stewart that on Jan. 6, 2020, he had been with two other men, and a marijuana transaction was set to take place behind the Perry McDonald’s in a vehicle, but the purchaser had fake money, and Renderos instead pulled out a BB-type gun and told the seller to give him the marijuana.

“Two individuals came over to my house,” Renderos told Stewart. “They were speaking about buying weed. I wanted to buy some too so I rode along with them… When we got there, one thing led to another. The only thing I had on me that looked close to a gun was a revolver-type BB gun. (The victim) seen it, and I pulled it out. I waved it around and said, ‘Give us the weed.’”

Renderos added that another individual hit the victim in the head as he exited the vehicle and the two men left the victim at the Perry McDonald’s.

In Michigan, armed robbery is punishable by up to life in prison, but Shiawassee County Assistant Prosecutor Charles Quick estimated sentencing guidelines at four years, three months to seven years, one month. Stewart ordered Renderos remanded to the custody of the Shiawassee County Sheriff’s Office and set sentencing for 8:30 a.m. Sept. 3.

In return for Renderos’ guilty plea to the armed robbery charge, prosecutors dismissed one felony count of false imprisonment.

Renderos was charged by prosecutors in June 2020, and arraigned July 2, 2020, before former 66th District Court Judge Terrance Dignan. Renderos pleaded not guilty at that time and posted a $75,000 cash/surety bond July 6, 2020.

His case was bound over to circuit court in August 2020. Circuit court records do not indicate the reason, but Renderos’ bond appears to have been revoked at some point, as Renderos had been lodged at the jail before Wednesday’s hearing.

Proceedings in Renderos’ case were also delayed due to his former defense attorney contracting COVID-19.

Should the U.S. expel Haitian migrants arriving at the Texas border?