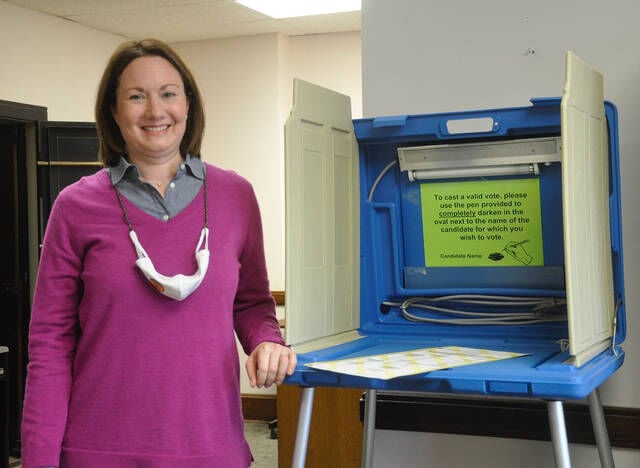 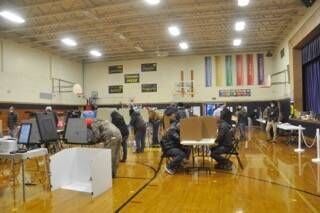 SHIAWASSEE COUNTY — With all the extra mail-in ballots that had to be counted Nov. 3 as a result of COVID-19, area election clerks were braced for a bit of confusion and chaos.

But for the most part, it didn’t happen. While the hours were long — 17 or more — for election workers in many municipalities, virtually all of the absentee and in-person votes in Shiawassee County were tabulated and posted online by early Wednesday morning.

To the relief of everyone involved, there were no reports of political drama at polling places, much less local claims of voter fraud. However, a single typo that was corrected within 30 minutes managed to capture national attention.

“All in all, everything really went very smoothly,” Shiawassee County Clerk Caroline Wilson said Thursday. “We had a lot of calls before the election, but we were trained for their questions.”

Wilson remembered expressing concern to Elections Clerk Abby Bowen in the lead-up to the general election.

“If this pandemic doesn’t lighten up, and I don’t think it will, we’ll have an interesting election for sure,” Wilson said to Bowen.

Wilson’s concern was well-founded. Not only did cities, villages and townships — which run their own voting precincts and count their own ballots — have taller-than-usual piles of absentee ballots to count Nov. 3 but, as it happened, polling places were hit with a larger-than-expected turnout of in-person voters on Election Day.

But none of the potential problems materialized as a record number of county residents exercised their right to vote.

“We had a 72 percent (total) turnout, the highest Shiawassee County has ever had,” Wilson said. “This is a phenomenal representation, and I hope that number remains. I hope people continue to understand the privilege of the vote — they definitely got it this election.”

The August primary election had signalled looming challenges in November.

Wilson said was the primary “extremely busy” because of confusion among voters about how to vote absentee and the high number of mail-in ballots that came in.

Meeting the extraordinary challenges in November’s presidential election created by the pandemic meant a lot of advance planning. For one thing, more AV counting boards, which process and tabulate AV ballots, were needed.

Each counting board is composed of at least three people, with balanced representation from each major political party. Typically, two AV counting boards are used in Shiawassee County. For the August primary, the number was upped to nine. For the general election on Nov. 3, there were 11 counting boards.

As part of her election preparation, Wilson conducts training sessions for election workers. Municipalities had to recruit significant numbers of new election workers because several seasoned, older workers said they didn’t want to risk catching the virus on Election Day.

The number of training classes this year was off the charts.

Election Day in Perry and

The city of Perry typically uses four to six election workers. For Nov. 3, they hired 10 workers. The move paid off Nov. 3, since the in-person turnout was much higher than expected, Perry Clerk Devin Miller said.

Many voters, despite risks posed by the pandemic, wanted to vote in person, perhaps as added assurance their vote would be counted and not, for example, get lost in the mail. Republicans, especially, seemed to go with in-person voting, while Democrats tended to vote by mail.

As national political tensions around the election played out in the media and on the ground in the previous weeks and months, the folks lining up inside Perry polling places on Election Day were downright cheery.

“The (in-person) voters were great. They were just glad they had the right to vote,” Miller said.

“You didn’t hear or even feel politics. It was wonderful.”

Perry’s previous record for AV ballots for a presidential election, 280, was smashed on Nov. 3 with more than 500 ballots. The first tally report balanced right away, Miller said. The second report, on spoiled ballots, was off by two for 30 minutes before it balanced.

Miller credited her election team: “They rocked it out. They made it work.”

In Perry Township, AV ballots soared from 250 to 885 and in-person voting was steady all day, Township Clerk Kelly Schmidt said. A number of residents volunteered as election workers to replace some older workers who sat out the November election because of the pandemic.

“We had a lot of new people, and that was wonderful,” Schmidt said. “Election Day is more than filling out a ballot and putting it in a tabulator. This is a huge process behind the scenes. We did a lot of due diligence. To have people volunteer to be election workers, it really is nice because they can see the process as well.”

“In general, I think it went well,” she said.

Election Day in the

The election process ran like a well-oiled machine in Owosso Nov. 3, despite a 45 percent increase in AV ballots from November 2016, and in-person voting topping 4,000, adding up to a 13.6 percent increase in overall turnout from four years previously.

Owosso City Clerk Amy Kirkland had to recruit more election workers to shore up the veteran workers who didn’t want to risk infection this year, but the total number — 95-100 — didn’t increase from previous years.

Owosso normally had one AV counting board but Nov. 3 had three boards, each staffed with six people.

“Everyone did a fantastic job,” Kirkland said. “They’re on the front lines. They deserve all the kudos that are to be given. They work a day just as long as I do.

It’s always a long day. Kirkland and Deputy City Clerk Carrie Farr arrived at city hall at 5:30 a.m. Tuesday, followed by election workers who came in at 6 a.m. Everyone stayed until 1:30 a.m. Wednesday.

“It makes for a marathon of a day, but things went really pretty smoothly for a presidential election,” Kirkland said. “Statistically, we had more phone calls with questions this year, but we didn’t have nearly as much of that as I anticipated.”

About 75 people who had requested AV ballots showed up on Tuesday to vote in person, requiring election workers to make sure they weren’t voting twice.

As it turned out, no one voted twice or even tried to, Kirkland said.

Kirkland said Election Day was the culmination of months of preparation, including looking at potential numbers of voters and simulating different scenarios so she would know how many election workers to recruit and train.

“It’s a marathon that starts months before the election,” Kirkland said. “I’ve taken a liking to the term ‘election season.’ People are realizing how much goes into an election.”

One simple typo on Nov. 3 complicated Wilson’s life for several days. She uploaded numbers to the state’s election software program, which already supplied zeroes. One slip of the finger and the 15,371 votes she recorded for Biden contained an extra zero, making it 153,710.

The discrepancy was caught quickly and fixed within a half an hour, “but not quickly enough,” Wilson said.

Election observers from across the country, eyeing the presidential election with microscopic attention, picked up on the momentary mistake.

The next day, Wilson was flooded with calls and emails from more than a dozen media outlets in the U.S., England and France.

President Trump even tweeted about it. The typo in Shiawassee County was ranked the No. 1 tweet containing misinformation during the presidential election.

A week later, Wilson agreed to an interview with the NPR radio program “This American Life.” Host Ira Glass “was trying to show people it wasn’t fraud,” Wilson said.

Being accused of election chicanery didn’t sit well with the county clerk.

“Shame on them,” she said. “It was a typo — that’s the truth. I was awed (by all the attention) because we fixed it so quickly. When something is resolved, I move on.”

With the hullabaloo over, Wilson reflected on how well municipal clerks handled the biggest vote-garnering Election Day in the county’s history.

“So many of them did such a great job,” she said. “Everybody put in an abundant number of hours. The brunt of Election Day is on the election workers and the clerks.”

That includes Bowen and county Vital Records Clerk GeriLynn Kellogg, who covered the clerk’s office while Wilson and Bowen were handling election duties.

“It was definitely a team effort,” Wilson said.

Should the U.S. completely pull its troops from Afghanistan