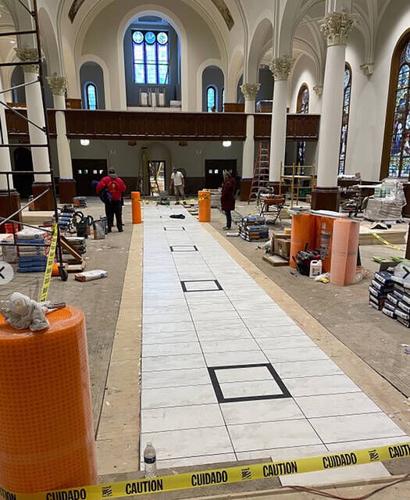 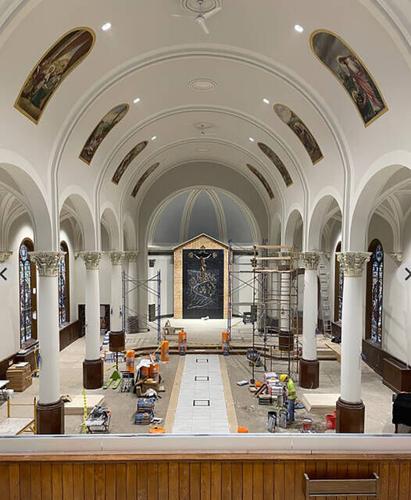 MAPLE GROVE TWP. — A major renovation of St. Michael Catholic Church’s interior is more than 80% completed, with church leaders planning a 10 a.m. dedication on Dec. 19 — in time for Christmas.

Construction work on the $1.7-million project began in August, aided by many parishioner volunteers. Improvements reach every square foot of the large, 100-year-old building.

“We have recaptured the essence of what our forebears got right when this building was initially constructed,” said parish priest, the Rev. John Cotter. “The beauty of something helps us recognize the presence of God. I’m hoping that’s part of people’s experience when they see this for the first time.”

Every room inside the church has been repainted, even the engraved “capitals” or tops of church columns, which were accented with gold leaf. Among the new liturgical furnishings are a new, life-sized crucifix carved in Italy, pews, organ and stations of the cross. Flooring — carpet and tile — is being replaced throughout the building.

Several modifications to the sanctuary have been made over the years, but the new layout harkens back to the founders’ original design. The goal was not only to honor the parish’s founding fathers. but also to enhance parishioner participation and response, Cotter said.

The only exterior update was the installation of clear glass over the cathedral’s 12 stained-glass windows to protect them from the elements.

“Our parish is excited. Overall, the look is refreshing and new,” associate pastor, the Rev. Joseph Henige said. “It kind of rejuvenates people’s faith, knowing there’s something new to come.”

Since August, parishioners have been attending St. Mary of the Immaculate Conception parish in Albee, about 10 miles north of St. Michael.

But some church members have already viewed the progress at St. Michael as volunteers who have been helping with painting and cleanup. In charge is general contractor R.C. Hendrick & Son, based in Saginaw.

The renovation is being funded by donations to the church’s ongoing capital campaign. In addition, individual parishioners have stepped up to cover the cost of particular items, including the new digital Allen organ.

Volunteer Randy Henige, a parishioner at St. Michael since birth, has been working at the site daily, acting as a liaison between the building contractors and church leaders.

“I’m pleased with how things are going with the project,” Henige said. “I’m most pleased with the painting of the church. It beautified the sanctuary more than I expected. I’m confident (parishioners) will have a positive experience. They’ll see the beauty that’s been brought back out.”

Although the church building dates back to the 1920s, St. Michael has been in existence since March 1, 1863, when the first service was conducted inside a tiny log cabin.

The log cabin didn’t last long, giving way to a wooden church building completed four years later. As more settlers moved into the area — many of them German farmers — the wooden church was no longer large enough to hold all of its members. In 1883, the cornerstone of a second church was laid.

With membership continuing to grow, a third church building — the current structure — was built in 1921, at a cost of $70,000. In all three cases, no general contractor was engaged because just about all of the labor was furnished by parishioners.

As early as 1876, a parochial school was established in the church building. Eventually, a separate K-10 school was built. That school became an elementary/middle school as the construction of a high school was completed in 1959.

The St. Michael school closed in 1971, after church leaders concluded it was too costly to continue. Most students transferred to the New Lothrop School District, where some parishioners won seats on the Board of Education.

In addition to the church and school buildings, a convent and rectory were built on the grounds.

Over the years, the main church building has undergone updates and renovations, including a new front entrance. The slate roof was replaced by a metal one a couple of years ago. One thing that hasn’t changed is its tower featuring a copper dome. When lit by the sun it can be seen from miles around.

Joseph Henige noted it was back in 1999 when the parish last gave the building a major makeover.

“The people of the parish take pride in their church,” he said. “It was time to do some work on this 100-year-old building.”

Have you been affected by the baby formula shortage in the United States?